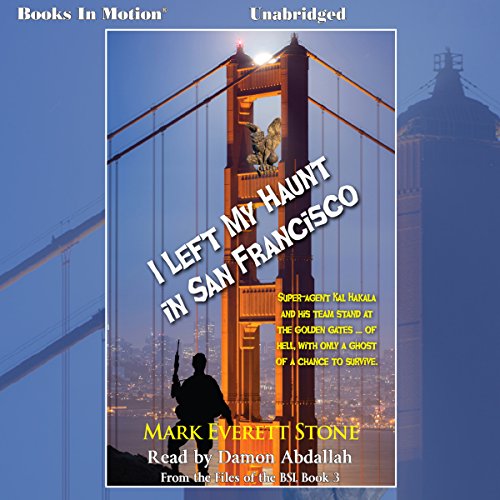 I Left My Haunt in San Francisco

I Left My Haunt in San Francisco

After avenging himself on the mythical monster that killed his sister, Kal Hakela is back at the Bureau of Supernatural Investigation. But, with only a few months left on his contract, he's tempted to retire along with his new love, former MI-7 agent Jeanie. When a friend and former BSI agent in San Francisco kills himself, he leaves Kal a clue, one he cannot ignore. The city is full of bad memories for Kal. In his last mission there, he killed a deranged serial rapist who used magic to murder his victims. Though successful, the mission resulted in unfortunate collateral damage, which earned Kal the enmity of San Francisco's ghostly Supernatural protector.

With the fate of every human on Earth at stake, Kal and his team confront a slew of Supernatural perils, from giant insects to gargoyles. And they must complete their mission without the help of the BSI, its magical weaponry, and the superhuman power of Kal's legendary rage.

What listeners say about I Left My Haunt in San Francisco

Even better than the last two.

This book was great. All out action, cool characters and they kill lots of elves. I hate elves so this was fun for me. All the components of the last two books are there. It has action, humor, cool fights but with the bonus of seeing the protagonists lay the smack down on some snotty Tolkien-esque elves while saving the world in the process.

Once again the author doesn't shy away from killing off major characters. It lends tension to the series because you really feel anyone but Hal is fair game at any time. This series has been steadily improving and I look forward to the next book in the series.

Look up how to pronounce words

Wish the narrator had looked up how to pronounce Sidhe. It really detracted from the book every time he said it incorrectly.

Which character – as performed by Damon Abdallah – was your favorite?

Damon Abdallah does a fantastic job with this book. Nearly every reader pronouces fairie names differently and it was fine with me to hear DA do so. His voice is perfect for Kal and he does a great job with the different characters.

This series has become a favorite of mine. The author keeps the stories fresh and fast paced. Stone has created a lead character with depth and a good sense of humor. There are many highs and lows for Kal and this is what has made me really enjoy the series and in particular this book, which is my favorite so far. The author has created a cool niche with his main character and story line that will be fun for many more books, I hope.

Great story. Very exciting and adds new creatures and lots of violence.
The reader is good but needs to learn how to pronounce certain words.

Excellent apart from one glaring error

And I can't even say what the pronunciation error us because it's a spoiler. I did end up shouting at the reader every time it was said incorrectly though. But despite that, it was still an excellent read