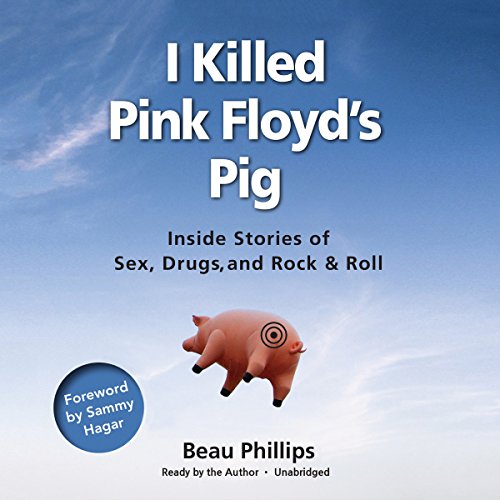 I Killed Pink Floyd's Pig is an all-access behind-the-scenes VIP tour of when rock was great, courtesy of Beau Phillips, a respected radio programmer and former head of marketing at MTV.

Phillips was an insider and occasional accomplice who witnessed the legends of classic rock in their heyday and takes listeners inside the dressing rooms, hotel suites, and private planes of Led Zeppelin, the Rolling Stones, AC/DC, Eric Clapton, Paul McCartney, and dozens more to enjoy funny, decadent, and never-been-told stories of sex, drugs, and rock and roll.

The book's foreword was written by Sammy Hagar, former lead singer for Van Halen. He and Phillips met in the late 1970s, early in Hagar's career. Sammy wrote, "Beau has seen all of the rock and roll craziness - and his book is loaded with amazing stories."

Artimus Pyle is not dead. He is alive and well, and has a band! Poor fact checking on Mr. Phillips part.

Beau Phillips celebrates the dubious heroism of self entitled rock stars with drug-fuzzy brains throwing TVs out of hotel rooms and insulting disabled fans, all admiringly described by the author in the words of a pubertal boy. If you are 15 years old and aspire to these kind of stunts, then this book may hold some inspirations for you. Everybody else will probably not get past the first chapter.

Good stories and some insightful look at the Rock radio stations lives.

Only real negative. Chapter 34. Lynard Skynard. Artemis Pyle is NOT dead as told by Beau. Come on.

Great behind the scenes I grew up in the Seattle area and am Still listening to KISW this book was a great ride down memory lane what a awesome time to be growing up KISW SEATTLE’S BEST ROCK!!!!

Beau Phillips recounts his many anecdotes of dealing with classic rock's biggest stars during his years as an FM radio DJ and VH1 executive. In the title story, for example, he tells how he borrowed Pink Floyd's giant pig prop for a radio promotion, lost it, and then damaged it in recovering it. He embarrassed himself in front of Robert Plant and Dicky Betts, embarrassed Ann Wilson of Heart, and won over Pete Townsend, among many other tales.

Whether you'll like this begins with whether you like classic rock. You don't have to like all the artists he talks about -- I don't care for AC/DC, but his AC/DC story is a good one (if true). But if you don't at least know who he's talking about, this won't work for you. Even if you do, you may not find his stories to be serious enough -- you'll hear about how Led Zep liked to throw TVs out of hotel windows, but you won't get any deeper than that. And in his zeal to tell you how much he hates disco, Phillips has unfortunately missed the racial element of the disco record burning fiasco.

On the other hand, when you hear what Paul McCartney did for a Make a Wish teen that Phillips brought to him, you may feel differently about him than you ever did before.

Overall, I believe Phillips had an opportunity to write an important book about rock music, but chose instead to write a fun book. As an FM DJ and program director, he has inside information about how rock radio helped make or break artists, and how that changed with the advent of the internet. He discusses that in his epilogue. I would have loved the entire book to be about that. Led Zep's TV fetish means nothing and has been told elsewhere -- I much prefer hearing the story of how rock radio broke out Bon Jovi, AC/DC, Pat Benatar and the like. I want more of that.

Still, for a fan, good stuff.