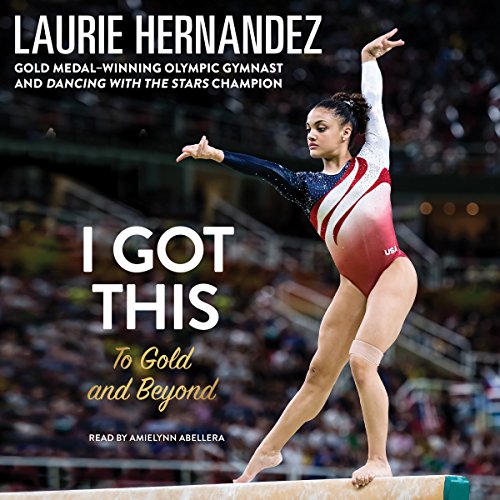 Gold medal-winning Olympic gymnast and Dancing with the Stars champion Laurie Hernandez shares her story in her own words in this debut book for fans of all ages!

At 16 years old, Laurie Hernandez has already made many of her dreams come true - and yet it’s only the beginning for this highly accomplished athlete. A Latina Jersey girl, Laurie saw her life take a dramatic turn last summer when she was chosen to be a part of the 2016 US Olympic gymnastics team.

After winning gold in Rio as part of the Final Five, Laurie also earned an individual silver medal for her performance on the balance beam. Nicknamed “the Human Emoji” for her wide-eyed and animated expressions, Laurie continued to dance her way into everyone’s hearts while competing on the hit reality TV show Dancing with the Stars, where she was the youngest ever winner of the Mirrorball Trophy.

Poignant and funny, Laurie’s story is about growing up with the dream of becoming an Olympian and what it took to win gold. She talks about her loving family, her rigorous training, her intense sacrifices, and her amazing triumphs. Be prepared to fall in love with and be mesmerized by America’s newest sweetheart all over again.

What listeners say about I Got This

I am a big fan of gymnastics and of sports memoirs - Dominique Moceanu's book was amazing. Simone Biles was obviously more guarded, but even that book gave a glimpse beneath the surface. If you're looking for a book like that, look elsewhere. This book was obviously not penned by Laurie, and it shows. It reads like someone's idea of how a sixteen year old girl would write. Someone who does not know any sixteen year old girls. Lots of "IT WAS SOOO FUN!" and "I WAS SOOOO DISAPPOINTED!" It contains a few tiny tidbits about her personal life but almost no detail. I feel like I could have written this book based solely on her interviews before and after Rio. Her life before 2016 is glossed over in the first 30 minutes. Although there's lots of talk about making the Olympic team, the competitions themselves and the details of her routines are barely discussed. Even if you feel compelled to read this book, please buy the physical edition and steer clear of the audiobook. The book is read the way it's written - like an overly dramatic idea of what a teenage girl would sound like. Whoever directed the production must have told the narrator to try and "act" and take dramatic pauses. The effect is almost unlistenable. Not to mention typical mispronunciations which show that there was zero research put in by the producers. The narration is slightly more tolerable if you speed it up to 1.25x normal speed. I want my four hours and my credit back.

The overall story was good. How very I found it very superficial and redundant.

I listened to this one after listening to the Simone Biles audiobook and I was a bit disappointed with this one.

It may be that Laurie just didn't have the hurdles that Simone had. However, I think it's more that whoever was writing it did not dig deeper into those hurdles and her overall success.

I liked the story, but the writing of it wasn’t very technical or creative. It used a lot of “very”’s and “really”’s to describe things, and the reading was a little cheesy at times. Overall it was decent.

This is perfect for any young aspiring gymnast or athlete!!! It’s happy, fun and very inspirational!!! The reader really seems to capture Laurie’s tone and energy! I highly recommend it!!!

First audio book. I loved the story telling. I feel m7ch closer to the author now.

Laurie is a beautiful soul. Loved the book. It was so good I definitely had a great time reading her book.