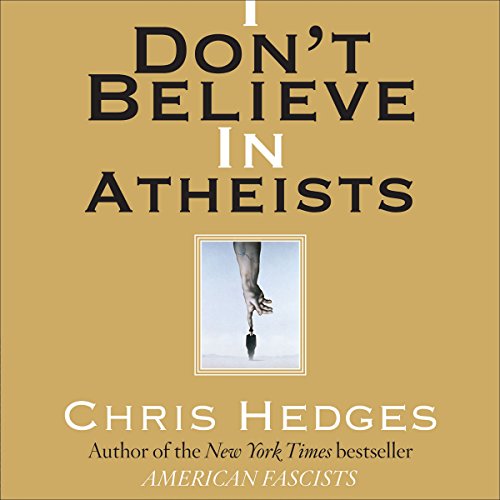 I Don't Believe in Atheists

I Don't Believe in Atheists

The New York Times best-selling author speaks out against those who attack religion to advance their own agenda: global capitalism, intolerance, and imperial projects.

There are two radical and dangerous sides to the debate on faith and religion in America: Christian fundamentalists, who see religious faith as their exclusive prerogative, and New Atheists, who brand all religious belief as irrational. Too often, the religious majority - those committed to tolerance and compassion as well as their faith - are caught in the middle.

Chris Hedges critiques the mindset that rages against religion and faith. He accuses the New Atheists - led by Sam Harris, Richard Dawkins, and Christopher Hitchens - of promoting a belief system that is not, as they claim, based on reason and science, but on a simplified worldview of us vs. them, intolerance toward behaviors that are not understood, and the false myths of human progress and moral superiority. Ultimately, he makes way for new, moderate voices to join the debate. This is a timely, compelling work for anyone who wants to understand the true state of the battle about faith today.

"Chris Hedges reminds us that the point of religion is not to make us disdain those who think differently but rather to help us become decent, responsive, and moral human beings." ( 0, The Oprah Magazine)

Having the book narrated by its author brought the words to life. Ĺoved it and so did my eyes.

Good book by a great author.

I don't fully agree with everything Chris Hedges says in this book but it made me question some of my beliefs.

Certainly Mr. Hedges does believe in atheists, in fact concludes that the newest generation of atheists (Hitchens, Harris, Dawkins etc) are ideologues closer in kind to the religious extremists they desire to literally annihilate.

As an experienced war correspondent who has confessed his own addiction to the “rush and excitement of battle,” he has something important to say about extremism, no matter from which direction it is coming.

He sees the future is bleak and no solution unless people regain the power that the governments now posses.

Hedges explains that these “militant atheists,” posing as religious experts, do not simply disagree with religious truth claims — they see them as evils. Dawkins says they must be removed from our culture, Hitchens blamed it on the Muslims and Harris takes it to the next level in a recent interview in which he states If he had a magic wand with which to eradicate rape or religion he'd choose religion.

Fact moving audio, leaves you with many things to consider. Excellent information and not the typical debate retaliatory commentary in any way.

I think Chris Hedges is an incredible writer and thinker and I recommend all his books.
He is NOT a good narrator though, I think I would rather have a computer read it because then the pace would be consistent. It actually breaks my heart to say this but want to save others from trying to listen to this book rather than reading it occularly. I wish he hadn't narrated his other books so I could listen to them but I can't stand it.

Chris Hedges is an important thinker. He writes polemics, and sometimes his brush is too broad. Yet, his is an important voice. Although he is now largely outside the church, he writes essentially from a Christian perspective, extending the ideas of Niebuhr. Although having been reared within the church and having been trained as a theologian, he believes the mainline churches have become complacent. However, his polemic is primarily directed towards fundamentalism, whether of the religious or atheistic form, by which he means the belief in the perfectibility of man and the imperialistic enterprises which such a belief encourages. He primary argument, following in Niebuhr's footsteps, is against hubris, the belief that we know the Truth, whether it takes a religious or cultural form, and that that those who oppose us are benighted and, if necessary, should be eliminated so that our superior way of life shall be universal.

An author who knows little but thinks he knows all

Books providing a criticism of religion can be quite enlightening, but this unfortunately isn't one of them. The author despises -- yes, that's the word -- the dogmatists of atheism and religion, even while condeming them for despising people with whom they disagree. And who are these religious/atheist fanatics? It seems they are people who believe the world can be a better place if we put our backs to the task. The author considers these people dangerous. Once he has pegged them, there is no journalistic scorn they should be spared. As a former newspaper reporter and editor, I recognize the style: the carefully selected anecdote, the contemptuous adjective, the dismissive summation. The monumental irony is that the author dispenses this vitriol against people whose unforgiveable fault is: being judgmental. How he manages to write this book without recognizing that irony is a mystery more shrouded than any religious cult.
I suppose there are dangerous atheists, although I don't know any. My atheist friends are generally educated and decent people, trying to make sense of this crazy world. I suppose there are dangerous believers, although I don't know any of them either. My Christian friends, mostly Catholics, mostly what the author would call (with the perfuntory camouflage journalists apply to certain prejudices they know their audiences generally share) "devout Catholics." But they, too, are fine and good people. I even know a few Fundamentalist Christians, and whatever their political agendas, I can only say this: if some unthinkable cataclysm comes hurtling upon the world, I'd be relieved to find them among the survivors. Anyhow, I know there are self-inflated journalists who have chafed under the barely perceptible limits that pass for professional ethics in their business, and who finally free themselves to write pedantic books about their uninformed and uninformable opinions. If you're looking for that book, look no further.

I found this book at Barnes and Noble and picked it up because I was taken with the title and it's NOT because I am/consider myself to be a Christian. Like him, I am disallusioned with the state of both the church, which comes mostly from it's ties to the current andministration, and the way it is attacked by "athiests" who like to lump everybody of a certain faith in the same group.

He says a lot of things that I agree with, but then again that's the problem. I'm not hearing a single idea on how to FIX things. He's just complaining that one side trusts in a mythology and the other side thinks reason and techonology will perfect society but he hasn't said, in the three hours or I've listened to thus far, how e fix them.

Personally, I think you need a little bit of both. We are God's creation, religon and technology are our inventions.

He's a good writer never devolving into name calling, although he comes close. He's very even handed in his criticisms, but, again, there's not a single idea to grasp.

If there was just one this book might be better. But without it, he becomes just another professional malcontent.

In an attempt to keep an open mind I was interested in getting a different view point to atheism and religion. I hope that I can save others their hard earned money.

This book mainly focuses on the ills of an extreme point of view. What is not considered is the substance behind the point of view. According to Mr. Hedges, mankind will always be stuck not knowing if god exists. Unlike books on atheism that provide historic and scientific references, this book is written base on opinion.

It appears that the author sees a chance to cash in on what he calls the neo-atheistic movement. That would be an understandable goal if the book had something of value to add either for or against. He does neither.

A book that every atheist should read

I have listened to quite a bit of Chris Hedges audio books. I don't agree with him all the time but he does do what most people won't do and talk about subjects that most authors are afraid to talk about. as someone that's a non-believer I think this book was great considering I can't really think of a book that does as good job is this that critiques the new atheist movement. this book May be over a decade old but, The information in this book is still revelant.

Yeah, I think I get his point... kind of. I don't think he knows what he wants to say either, he has a feeling and he's angry. Some people say he is a great force for good in this land and one should include him in ones studies alongside Hitchens and Dawkins ... they just often flatten him entirely in the writings ( Hitchens and Dawkins who are also the people he addresses directly in his writings ), in the logic and even in the narration.
That all being said, I can share that feeling he has that we might want to keep god in the picture as another word for compassion and the uniting spirit... see what I mean, I'm trying to narrow it down and it can't be narrowed down, it's quite a mess of a book.

I dig it, expresses thoughts many will find familiar but not often so well articulated. Some arguments the author doesn't sufficiently describe and these left me wanting a bit more but overall a well crafted book that will give me plenty to ponder.

I loved it. Many of the hypothesis in the book I myself alluded to,but I could never express myself as eloquently and as articulated as chris hedges

I have seen interviews and debates with Chris Hedges and thought he would have some interesting things to say on the religion/atheism question. Aside from the silly title of this book all he seems to do is criticise the atheists he apparently doesn't believe in. I was expecting a unique and fascination take on the subject as a whole. So I found this a very disappointing listen.