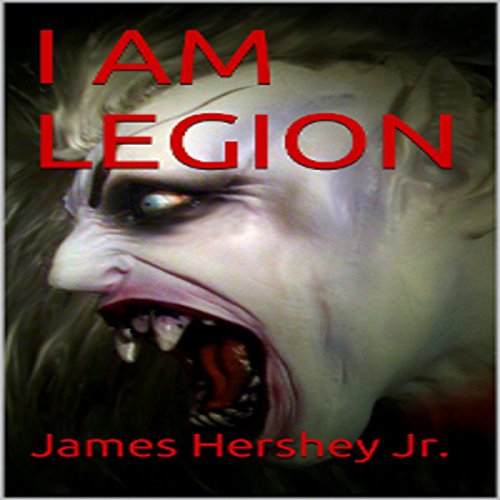 Darrion and Heather are vicious serial killers who have been torturing and murdering young women for years. It seems like nothing can stop them, until they catch the eye of an ancient demon who will stop at nothing to devour their souls. The body count continues to rise as the couple desperately races across the country to escape the unstoppable demon.

Don't miss this horrifying new novel from international selling author James Hershey, Jr., that's sure to have you jumping at shadows and keep you up all night. Critics have called this incredible, a mad rock-n-roll rollercoaster ride, and the scariest book of the year!

What listeners say about I Am Legion

Worst audio book EVER. Do NOT waste your time!

What disappointed you about I Am Legion?

I had hopes for this story at the beginning and there is the makings of a good story, however after 3 minutes of listening to Milo Spires, I pulled out my headphones and turned to my Wife and said "I don't know that I am going to be able to listen to this story!" After about the tenth "I love you baby!' and another ten "I love you too!' in I felt even less confident.Milo Spires has the kind of voice that to me reminds me of a witch, cackling whilst she drags all ten of her long, grimy blood encrusted fingernails down an extremely large blackboard (or chalkboard)! One particular point in the story has Milo talking in the two main characters voices to each other, whilst saying in his own voice in between (poorly dubbed too I might add), "Heather said" and "Darrion said!" or "Darrion said to Heather!"I fast forwarded a number of times hoping that the story would become so good, that the fact my ears were nearly bleeding from the endless assault from the narrator, wouldn't seem so bad. It didn't! I didn't finish the book. I couldn't finish the book! I am not sure still which was worse, the story itself or the narrator. One thing was certain, both together was way too much and I cringe at the sight of the books cover. At least that makes the story scary in one way!

What could James Hershey Jr have done to make this a more enjoyable book for you?

I doubt that there is anything that could make this book more enjoyable. To do so would mean I had enjoyed it to some level to begin with!

I personally don't think that Milo Spires should ever narrate another audio book EVER! If I see a book with his name as the orator, I wouldn't buy it no matter who the author was.

What character would you cut from I Am Legion?

All of them. The two main characters were ridiculous. The detective was a joke. The demon who was his daughter telling him he had to hurry daddy was uninspiring to say the least.

Save your money or monthly credit. Save your ears and also the speakers you use to listen to your books. Save your sanity and time; don't listen to this dribbling ridiculous terribly read trash! It is that bad.

I am legion is awesome

Milo Spires did a great job narrating this book. Milo's accent suprised me, but suited the book . the book was awesome. In parts it turned my stomach it was written well.

What was one of the most memorable moments of I Am Legion?

I loved the special effects that went into Legion's voice . The storyline was gruesome and the demon was the best.

Have you listened to any of Milo Spires’s other performances before? How does this one compare?

I've only heard snippets that he has on u-tube. This far outshines any I've heard before .

If you could take any character from I Am Legion out to dinner, who would it be and why?

I would take Heather out. She's a raging lunatic. I'd be wondering if she was going to slaughter the chef and grind him up for a meatloaf

I think Milo Spires should do gruesome books . He's very good at them

Heather because she never gives up she fights until the very end. She is crazy but loyal to a fault.

What does Milo Spires bring to the story that you wouldn’t experience if you just read the book?

He brings the story to life.

Where does I Am Legion rank among all the audiobooks you’ve listened to so far?

Ahh yea.. it was fear!! Kept me on edge and heart beating fast

I am Legion is one of the best books Ive ever read!! I don't get to read as much as I would like but as soon as I received I am Legion in the mail I opened it up just to get an idea of the writing and from Page 1 I could not put this book down!! I needed to know what was going to happen next all the way to the end! I absolutely love James Hershey Jr.'s writing and will continue to buy every book he publishes Never a dull moment in either books Ive read by him Makes you wonder how someones mind comes out with such greatness

What made the experience of listening to I Am Legion the most enjoyable?

The voice of narrator

Can't pick just one loved as a whole

Which character – as performed by Milo Spires – was your favorite?

I meant to buy I am legend

The writing is naive and simple. The audio actor has such a strong English accent that I can't understand what he's saying and then it sounds like it's recorded in a warehouse. hands down the worst audio recording of ever heard

What did you love best about I Am Legion?

I loved that this was far from your typical story. The "heroes" were the serial killers. Or was it Legion? There is no protagonist. Only two joyous killers against a creature who has been doing the same things they have, but for centuries.

I have to say, I liked Darrion. He's a guy who loves his wife and enjoys his life to the fullest. He's smart, but not so smart that it's unbelievable. He reacts to a horror movie situation better than most characters do and I respect that.

Have you listened to any of Milo Spires’s other performances before? How does this one compare?

I've never read any of his other books... but I think I will check them out after this.

If you could take any character from I Am Legion out to dinner, who would it be and why?

What a strange question to ask about a book. If I could take one character to dinner, who would it be and why? Legion. In the narrative of this story... he's not truly a bad guy. He's been wronged and is out for revenge. I can relate to that. He's seen all of human history and I'm sure he could tell some interesting stories. Quite simply, he is a multitude of people and would be the best possible dinner guest... until he devours your soul.

The narrator has a very distinct accent. Inner city British type. If you are someone who can't stand that, then you may not like this reading... but I loved it. His voice lent the perfect quality to the adventures of two serial killers and an ancient creature from the dawn of time.

What disappointed you about I Am Legion?

The narration was really bad, it was very difficult to listen to the book due to the high and low pitches of the audio.

by choosing a different narrator

Fans of Natural Born Killers and Kalifornia would enjoy this book but get the print version.
"I was provided this audiobook at no charge by the author, publisher and/or narrator in exchange for an unbiased review

I was just bad.

It just wasn't good. I didn't finish it but thats because I couldn't.

Would you ever listen to anything by James Hershey Jr again?

No the writing was really choppy. The information was not very well researched. It seemed like it was written by an 8th grader.

Who would you have cast as narrator instead of Milo Spires?

He tried. But the production sound was not good and his accent did not fit the characters at all.

Don't listen to this book.