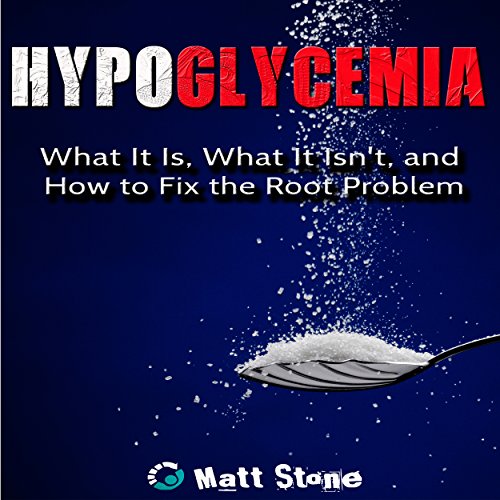 What It Is, What It Isn't, and How to Fix the Root Problem
By: Matt Stone
Narrated by: Matt Stone
Length: 1 hr and 16 mins
Categories: Health & Personal Development, Health & Fitness
2.5 out of 5 stars 2.3 (3 ratings)

You feel bad after eating certain foods or going too long without something to snack on? Maybe some headaches, irritability, shakiness, dizziness, cold hands and feet, even some anxiety at times? Well you must have hypoglycemia then.

Those are indeed some symptoms of true hypoglycemia, but what you're suffering from isn't very likely to be low blood sugar, it is something else, and it's most certainly real and not hypochondria like many doctors might lead you to believe.

You also don't need to be eating a high-protein, low-carb diet to prevent the symptoms you may get after eating lots of fast-absorbing carbs or when you've gone too long without food. In fact, eating a diet like that is likely to make the root cause worse over time, even if it gives you relief in the short-term.

In Hypoglycemia: What it Is, What it Isn't, and How to Fix the Root Problem, best-selling author Matt Stone discusses what's really going on.

The truth may surprise you, and you may have to stop using the H word to explain your symptoms.

Stone also lays out many effective solutions that have helped thousands worldwide to overcome the obnoxious and at times debilitating symptoms that tend to strike most often mid-morning and in the middle of the night as if a timer is set to it.

If you want a true, genuine way to resolve the tendency to "crash" after meals and/or in the middle of the night, no book in print will give you a better set of tools to go about doing just that - all for less than the price of a low-glycemic protein bar.

I'm positivity horrified Audible have this in their library. Two top quotes from it "I've got dude PMS" and at the end "Matt Stone is the MAN", the author is Matt Stone. He is completely unqualified and is handing out dangerous medical advice, he says for example, that he knows NOTHING about vitamin supplementation yet goes on to suggest taking high dose iodine. Heres the spoiler. His advice to fix post prandial syndrome which he thinks hypoglycemia is, 1. eat chips and ice cream more, particularly before bed. Drink less water. 'Make more yellow urine'!!. Eat more carbs, particularly refined ones like sugary breakfast cereal. Keep a small bag of salt and sugar in your pocket and eat that, seriously he said that. Eat more pretzels. He also says he doesn't like to get his research from statistics or evidence but more what 'his clients' tell him works. He endorses hair and mineral analysis which we all know is total rubbish, hands out his mates email address that does it. He also uses the book to try and sell his other 'books'. This guy is basically a lunatic and I'm disappointed Audible has this rubbish on here. I know I want a refund but I want this review to stay up so others don't waste their money and support this guy. Oh and for the record he thinks he's funny and I'm sorry to say he absolutely isn't.

I grew up in a household focused on diabetes. My mother told me I was hypoglycemic for as long as I have memories. I've spent most of my adult years thinking of my hypoglycemia as something I grew out of the more sever feelings that came with as a kid. Recently, I have had reason to try and figure out why I'm reacting and feeling in ways that I can't explain but remind me of my childhood hypoglycemia. This book was a great crash course into the topic of hypoglycemia. Dense with information and more than a few times causing me to say out loud while listening "that's me!". I could not believe that others found ice cream and potato chips helped - for me it's chocolate ice cream and salted peanuts. After listening to this book I want more info. I want to find a Dr that believes in hypoglycemia / adrenergic postprandial syndrome. I had no idea that some of the physical things I feel and the emotions I have might be influenced or because of hypoglycemia.

Additionally, when I was growing up she cautioned me that many Dr's would tell me hypoglycemia does not exist so I should be confident in my awareness and not look to my Dr's for advice. I implemented my mother's caution as a reason to rarely mention my hypoglycemia to my Dr's, while always making sure my Dr's knew of my family history of diabetes. After listening to this book I realize I've done myself a disservice by not talking to my Dr's about hypoglycemia. It's time for me to get busy.

What did you love best about Hypoglycemia?

I love the concept that if your body is having difficulty with a food that is more likely a problem with the body than with the food. Limiting certain foods from your diet is difficult and unless you have genetic trait or allergy the body should be able to adapt to handle the food you eat.

I learned that drinking tons of water is not recommended. I've always been cold even in the summer and I never would have correlated water drinking with that had I not read this and Matt's other books.

Um, scene. The one with the paramedic and his girlfriend. My sister is epileptic and I'm a nurse I probably would have given my sis the same advice if this book didn't have me thinking a different way about health.

In the past adrenergic syndrome was a problem for me. I do occasionally have cold hands a feet but before following Matt's advice I had them all the time.

Many people are skeptical about Matt's ideas. I wanted to ignore them to and did for a while but sometimes you just have to try some new ideas. If you are reading a book like this then your body is giving you trouble so maybe you are kidding yourself that your diet is perfect. I failed for four years find the health and vitality my diet was supposed to give me and I took leap of faith and it was the best thing I ever did.

I definitely struggle with what I always thought was low blood sugar. I gave it 4 stars simply for being short, direct, and validating. I will give it 5 stars if the advice works.

He disagrees with cause or existence of hypoglycem

Did not like the book or his conclusions. My first book return on Amazon , period.

I truly enjoyed listening to this peace. I am pleased to hear that there is a different point of view regarding hypoglycemia and physical and mental states we experience day to day. Even though the advices to overcome the negative experiences aren’t throughout explained scientifically and not many studies are provided I am going to follow them, because they are based in logic and why not to give it a try.

I love this book.

I just love it, okay? I’m getting ready to start my self-experimentation. Pancakes for breakfast! Lots of sleep! No more force-drinking water! I have a good feeling about this plan.😍

I am a fan of Matt Stone's work. This book is short and a fun read. The outline of his technique is easy to understand and straight forward. I've been following his methods for roughly 2 months now and have seen vast improvement in how I feel. I highly recommend it.

Short, sweet, and to the point! Thank you for including the links to additional information.

great book with info we need to think about

If you could sum up Hypoglycemia in three words, what would they be?

What was one of the most memorable moments of Hypoglycemia?

Matt does a great job narrating this book

I listen only when driving

It Makes So Much Sense

What made the experience of listening to Hypoglycemia the most enjoyable?

I've got a stack almost as tall as me, of books I intend to read. Being able to listen to Hypoglycemia while I did chores around the house was such a great way to get this valuable info that otherwise might have staying in the giant stack until I actually had time to sit down and read it.

The information presented for correcting "hypoglycemia" is pretty straight forward and closely aligns with Matt's regular recommendations. The beauty of this book is that he makes clear the underlying bodily processes that drive what we call hypoglycemia. He lays it all out clearly and in a very useable manner. It makes so much sense and it feels good to be able to speak about this condition in an accurate way. Plus, it is now clear to me why our standard recommendations for 'hypoglycemia' fail to fix the majority of sufferers.

What does Matt Stone bring to the story that you wouldn’t experience if you just read the book?

I've read lots of Matt Stone's books but it is great to hear it in his own voice.

After the first few chapters I felt so excited to finally understand how and why this condition happens. It was so interesting I listened to it twice!

I thought the book was great and is valuable not just for those that suffer from so-called 'hypoglycemia' but for those of us that attempt to help these people!