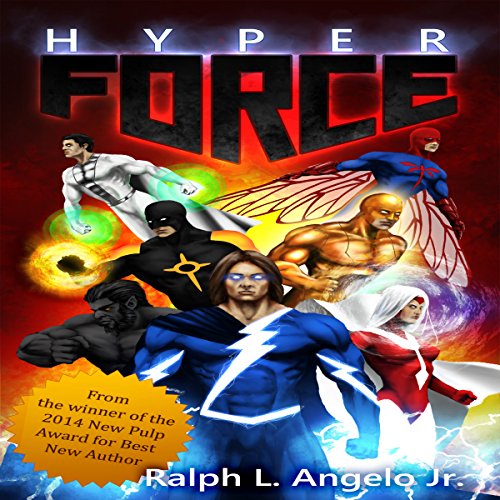 When a young alien prince crash-lands on Earth seeking help for his people, he sets into motion events that will bring together the greatest heroes the world has ever known. A team of newcomers will face a threat from beyond the stars. Along the way the team that will become known as Hyperforce will face many mysterious and dangerous enemies, each with their own incredible powers and abilities. They will be tested time and again, and if they should fail, any one of the threats they will face may be enough to destroy them all! If you are a fan of Silver Age and Bronze Age comic storytelling, this book is for you!

What listeners say about Hyperforce

This review will be read INSTANTLY!

The story could be great...but you could play a drinking game every time the word "instantly" is used. To many words mispronounced by the narrator. One example that really stood out to me was igneous rock, it was pronounced in genius rock. It makes it pretty hard to listen to. The other problem I had was it sounds like there is a slight echo in the recording. I even listed to some other books and music to make sure it wasn't my headphones. Some good notes. The story is pretty good. Non stop action, that's for sure. Pretty cool super powers as well.

Would you listen to Hyperforce again? Why?

The collection of hero's

This book kept me going for my entire road trip. A great collection of super hero's with quite an array of super powers. Each adventure was better than the last which lead to a great finally. Great job Mr. Angelo.

Out of this world adventure

What made the experience of listening to Hyperforce the most enjoyable?

A fun and interesting take on the "stranger in a strange land" premise.

The pace of the action.

What does Zachary Owen Turner bring to the story that you wouldn’t experience if you just read the book?

He brings the characters to life.

Yes, I kept having to charge my MP3 player.

This sounded like a mid 70s Marvel comic come to life!

Fun from start to finish!

What made the experience of listening to Hyperforce the most enjoyable?

Zachary Owen Turner. This man has a future in audiobook recordings! He literally gets into character every time he speaks, bringing all of the characters he voices alive.

Solaron: Imagine if Reed Richards (Mr. Fantastic of the Fantastic Four), Hank Pym (Ant-Man/Giant Man/Yellowjacket of The Avengers) and Ray Palmer (The Atom of the Justice League) were fused into one super-genius intellect with Captain Atom's powers. That's him.

Have you listened to any of Zachary Owen Turner’s other performances before? How does this one compare?

No. But I would now. He's outstanding!

It made me laugh many times. Because Zachary Turner got into the essence of the characters and the inflections in his voice when he changed from character to character was amazing. And as things got tense throughout the book, Mr. Turner delivered the goods. Mr. Angelo chose well when he chose Mr. Turner to read HYPERFORCE.

A well done enterprise by Mr. Angelo and Mr. Turner. I hope they work together again soon. The only thing missing from the audiobook was added sound effects. And God help me if there's another edition of the audiobook with sound effects added in with Mr. Turner narrating. Now that would be a dream come true. A true 5/5 stars. A must listen. Especially, if you have a lot of time on your hands. I highly recommend listening to this book.

not bad for a kids to early teen hero story, but, not something for more mature reader/listeners