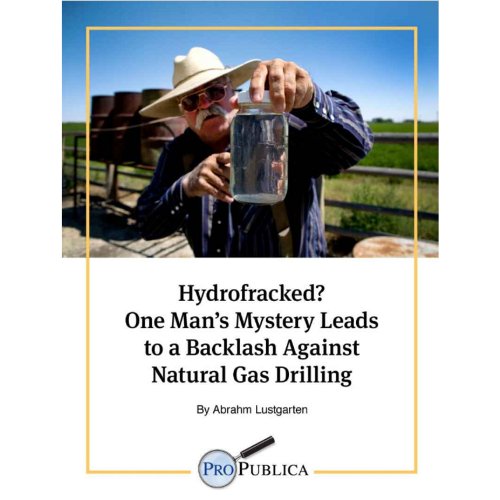 One Man's Mystery Leads to a Backlash Against Natural Gas Drilling
By: Abrahm Lustgarten
Narrated by: Steven Menasche
Length: 1 hr and 41 mins
Categories: Non-fiction, Environment
5 out of 5 stars 5.0 (1 rating)

Hydraulic fracturing, or “hydrofracking” has been a highly contentious subject of late, being presented as an economic boon and potential cheap energy source on one hand and a threat to the environment and public health on the other. Ambrahm Lustgarten, a reporter for ProPublica, who has written for the New York Times and the Washignton Post among other publications, puts a human face on the issue with the story of Louis Meeks, a Vietnam veteran living in eastern Wyoming who has had his personal water supply go foul. Steven Menasche tells the story with all of the Gusto that the hard-hitting investigative report deserves and all of the frustration that Meeks’ long battle with one of the most powerful corporations on the continent invokes.

When the well water on Louis Meeks’ ranch turned brown and oily, he suspected that the thousands of natural gas wells dotting the once-empty Wyoming landscape were somehow to blame. The hard part was proving it. Meeks’ struggle to get the energy companies to take responsibility, meticulously documented through three years of investigative reporting by ProPublica’s Abrahm Lustgarten, coincide with a national uproar over the oil and gas drilling process called hydraulic fracturing – a technology that promises to open large new energy supplies, perhaps at the expense of the nation’s water.

What listeners say about Hydrofracked?