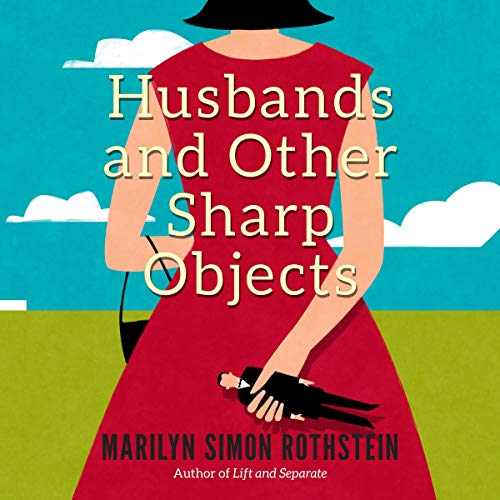 Husbands and Other Sharp Objects

A heartwarming, hilarious novel for anyone who has ever had a family, from the author of Lift and Separate.

After a lifetime of marriage, Marcy Hammer is ready to get herself unhitched - just as everyone else in her life is looking for a commitment. Her new boyfriend, Jon, wants to get serious, and her soon-to-be ex-husband, Harvey, is desperate to get back together. When her headstrong daughter announces a secret engagement to Harvey’s attorney, Marcy finds herself planning her daughter’s wedding as she plans her own divorce.

Now with two huge events on the horizon, the indomitable Marcy soon realizes that there’s nothing like a wedding to bring out the worst in everybody. From petty skirmishes over an ever-growing guest list to awkward confrontations with her sticky-fingered new in-laws, pulling off the wedding is going to be a challenge; seeing her divorce through is going to be a trial. And trying to make everyone happy might prove to be impossible - because in the end, Marcy alone must make a choice between something old and something new.

What listeners say about Husbands and Other Sharp Objects

Marcy Hammer had it all – a husband, three children and a life that many would envy. Then her husband had an affair. Now, during her divorce, she has to deal with the most obnoxious, self-centered Bridezilla (one of her lovely daughters) who is fixed on the family being the way it was – before the impending divorce. Not to mention her husband wants to come back and is eating himself into a health scare, and her new boyfriend wants some commitment and her best friend has cancer. This doesn’t even cover what her new in-laws are like!

Marcy tries to make everyone happy, play a major role in her daughter’s wedding and convince herself that she can keep moving forward – scary as it is.

I enjoyed this book. It was well written, light and fun. There were a few points where I told Marcy to drop it and do what she really wanted – kids are wonderful but little Ms. Bridezilla needed a reality check a lot sooner.

Marilyn Simon Rothstein developed each of her characters with care and depth. I especially loved her friend, Dana! Each of her characters was relatable and captivating – well, except the Bridezilla. Even she was expertly developed capturing how often our children have blinders on when it comes to their parents. The story flowed smoothly and was highly entertaining.

I have never heard Pamela Almand narrate before but she was very good! I loved her storytelling voice and she was perfect for these characters/story. She had the “mom” voice to a T!

There were no issues with the quality or production of this audiobook.

Audiobook was provided for review by the author/narrator/publisher.

This story picks up a wonderful and quirky group of characters from Rothstein's first book, Lift and Separate. I've missed them and loved this journey even more than the first.

This is a sweet little book, great summer read. It is not going to change your life, but it will make you smile. And that is a nice thing in this crazy world! To be honest, I "read" the book because I LOVE the narration by Pamela Almand! I have a 2 1/2 hour commute everyday in bumper to bumper traffic! You can imagine what my stress level must be like. My DIL suggested Audible, and Audible has been a game changer for me! It has turned the 2 hours I am in the car to "me time" where I can get lost in a book, and let the rest of the world go by. When I find a book narrated by Pamela...I am all in! She makes any story come alive! Go check her out, you won't be sorry!!

It was a good book

a great vacation book. Its a fun, light, page turner with down to earth characters.

Really hilarious and I loved the main characters

This was a funny and heartwarming romp through Marcy's life. The characters are just unique, and funny, and real to me and they all have their distinct personalitiies, some of them you love and some not so much. Pamela Almand just does a great job of doing this and I hope that the author does more with Marcy and her family and that Miss Almand reads them all. I will listen to them all and want to listen to the first one, too.

I so loved this book. Laugh out loud funny and the story is great! Enjoy!!!!

This story is so typical of real life, even if you are not Jewish and rich. I felt the same emotions that my own family members cause me but I could laugh because there was so much humor built in. The reader was excellent.

I don't usually read chick-lit, but this was funny and I got into it just out of curiosity when my wife kept chuckling while she listened. The characters in it were REALLY characters and it might prepare me for my own daughter's wedding- NOT! I could hear a lot of my relatives in the voices of a lot of the characters. Writer was funny, reader kept all the voices distinctive and kept it moving. Top-notch talent all around made a funny beach read out of this even for a dude.

What a marvelous light read. I was just told there is a prequel to this one called Lift And Separate that I plan to read next.
I loved the characters and how they developed through the story. I loved the sarcasm and interactions. Simply a wonderful book