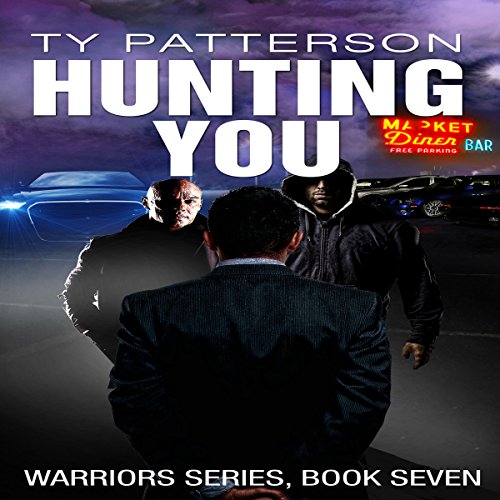 The armed intruders kill Hank Parker's family, first. They turn on him, and only then ask questions. Hank knows he is going to die no matter what he says. He gives them a name.

This time, it's beyond personal for Special Forces operative Zeb Carter.

The three intruders burst into Hank Parker's home when he is dining with his wife and kids. They execute his family, without uttering a single word, and then turn on him.

Hours later, Hank still has no answers to their questions. His family is dead. He himself is dying.

With his last breath, he gives them a name.

Special Forces Operative Zeb Carter is back. This time it is beyond personal.

What listeners say about Hunting You

One Man Agency with Friends

Ty Patterson has created a one man covert agency, but he has friends in all the right places. Zeb Carter is both pursued and pursuer in this fast passed adventure story. After finding out that one of one of his oldest friends from his time in the military has been killed with his whole family, Zeb, starts his vacation, by working up the gang who did the hit to find out whose responsible. As he moves up the line destruction in his wake it's a good thing his friends keep tabs on him. Their vacation a end early. But this is a great book to give you a vacation from your day.

Hank Parker and his family were having dinner together when three men broke thru the door demanding to know where the money was. When Hank says he doesn't know what the men are talking about, they kill the Parker family. Before Hank is killed, he gives the men the name Zeb Carter. Carter and Parker were old Army buddies, making the killing personal for Zeb.

Zeb's crew are all scattered across the country, leaving Zeb on his own to figure out why his friend Hank and his family were killed by three gang members. As in all of the Warrior books, there is plenty going on before getting to the meat of the story, but you will not be disappointed once you reach the conclusion.

Steve Carlson in my opinion does a remarkable job narrating the four books in the Warrior Series that are available as an audio book.

Ty Patterson is an excellent action writer and I highly recommend his books. Next on my Audible list is Zero.

Move over Jack Reacher. Zeb Carter is in town.

I can't tell you how I have loved these books. Zeb and crew are like a breath of fresh air. I can't get enough of the smart thinking smooth flow of zeb. Moving on to Zero. Ty for such great writing