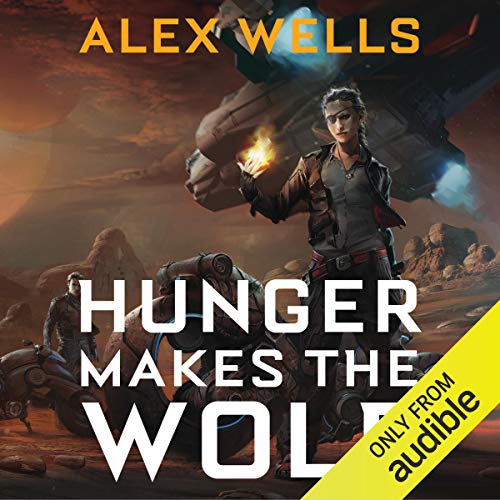 The strange planet known as Tanegawa's World is owned by TransRifts Inc, the company with the absolute monopoly on interstellar travel. Hob landed there 10 years ago, a penniless orphan left behind by a rift ship. She was taken in by Nick Ravani and quickly became a member of his mercenary biker troop, the Ghost Wolves. Ten years later, she discovers that the body of Nick's brother out in the dunes. Worse, his daughter is missing, taken by shady beings called the Weathermen. But there are greater mysteries to be discovered both about Hob and the strange planet she calls home.

What listeners say about Hunger Makes the Wolf

I was a good listen, not too demanding. I liked the setting, good world building. The Scifi made sense, the Magic made sense, and weird western vibe helped give it both an alien and familiar feeling.

Very enjoyable series beginning. I loved the characters. I loved the setting. I loved the world-building. My rough impression is that this is the sort of story that might happen if a world (very vaguely) like Dune were found in the Firefly universe. Highly recommended.

Alex Wells is a new-to-me author. I found them in a Twitter thread of book recommendations. I’ll be honest. I have no idea what about this author, and/or book, caught my eye to make me go look them up. I wasn’t looking for new books to read, as my TBR is never-ending. Anyway, I’m so glad I stumbled upon them. I really enjoyed this first book in The Ghost Wolves series.

Hunger Makes the Wolf is set on a different and harsh planet. It follows two main characters, cousins. Hob Ravani and Magdala Kushtrim, two young women growing up in more of a man’s world. They come from completely different ways of life, but are still distant family.

Hob is part of a mercenary group called The Ghost Wolves. Her uncle is the leader of the group, but she’s not given any leeway. She starts off the story at the bottom of the group after making a horrible decision.

Mag, we find her with her father trying to buy her a way off the planet. To do what most fathers would do in his position, try to find a better life for his only daughter/child. However, she never gets to board the transport, as they find her “contaminated” but won’t give her much information.

This was a very well-developed story about the haves and have-nots. There’s also the prejudice, as they demonize people for “witchiness”. They even go so far as to convince people that it is contagious, so as to help people purge those with powers before the people in charge, which is a mining business.

As close as this kind of story hits home (especially as I was listening to this early on in peak COVID shutdowns), I found I really enjoyed this story. While it was escaping to a world with many of the same problems I was seeing with prejudice and demonizing of others, I still enjoyed escaping to this world with Hob and Mags. I think I enjoyed seeing them do the right thing by others, even as it risked themselves.

If you know me, you know how much I love well-written characters. I want characters I like, or in some cases, love to hate. I really enjoyed the characters of this book. Not only Hob and Mags, but also The Bonecollector and Coyote and the rest of The Ghost Wolves. I really want to spend more time with them. I’ll be picking up the sequel very soon.

Narration:
This is my first time listening to Penelope Rawlins. I really enjoyed her voice. I really fell into and got lost in the story. I loved all the voices she chose for each character. I thought they fit perfectly, male and female alike. I really felt like she put a lot of passion into each and every character. I would gladly listen to perform more audiobooks.

** Note: I was able to listen to this audiobook free with my Audible membership.

Love Alex Wells, and just listened to 2nd book, too. Hope she keeps writing this series! Penelope Rawlings grew on me throughout the book and with book two, also. As far as I’m concerned, she IS Hobbs, Mags, Boneman, Coyote & all the others!

Not great if you struggle with accents

I only read a bit of the first chapter as I was really struggling to understand the narration. I struggle with understanding accents, and the main characters of the first chapter were presented as having a variety of very thick accents. (Southern-ish, vaguely British, and maybe Scottish?) I had trouble making out all the words of each line of dialogue, as well as telling apart/remembering the unfamiliar character names when said in dialogue, so I gave up.

Captivating sci-fi western, especially for free in Audible Plus. This book is only for folks who can handle accent-psychedelics, gang/union violence, and working class crudity and profanity. The narrator’s use of accents for pretty much every character, with strong Irish and southern accents for the main characters, can be distracting. Sisters from other misters, Hobbs and Mags, are connected with a biker gang that works the mines of this sandy planet and takes life dead-on with rough words and ruthless violence. Seriously folks, you’d better be okay with salty Fx and Cx, and anti-hero criminals.

The plots and setting are at once familiar and unique. Much of the magic feels like voodoo, involving blood, bones, and creepy essences marking the humans-turned-witch-natives for the ghoulish corporate weathermen to hunt (I kept picturing the ghastly, suited silent dudes from the Scream episode of Buffy). Then there’s the multiple variations of what “burning witch” means. Then there’s a sinister Get Out mystery of what happens to people trying to leave the planet. Hmm, maybe this isn’t just a sci-fi, western story; maybe this is a sci-fi, western, and horror story... Whatever it is, it’s dark and edgy, and I dig it.

There’s definitely a Dune vibe, from the sandy planet to the mysterious, magical substance desired galaxy-wide, to the cruel subjugation of the “natives,” who used to be human but are now something... more. But, I wouldn’t call this derivative at all.

This book’s protagonist is refreshingly NOT a naive, royal male who first needs to be brought low before he can earn his place amongst the rebellion. We don’t spend long segments in training montages or bonding scenes. This story starts in more Mad Max or Unforgiven style, as one-eyed, chain smoking, tall and prickly Hobbs has been living alone in the wilds, having screwed up and been cast out of her adopted biker gang family. But, a family death and kidnapping pulls Hobbs back to her family and then into an interplanetary fight for power.

Yes, there were things that could have been done better. I would have liked more visuals of the world and the characters (you won’t know that Coyote is Asian until nearly the end of the book, for instance). It also would have been nice to have a side chapter or two to develop character bonds/traits for the supporting characters (At least a little bit of training montages or side missions with the gang would have been nice). Overall, however, I am mightily pleased to find such a solid, and free, book. This was good enough to hook me into paying for book 2.

Alex Wells spends a good deal of time getting the reader to fall in love with the main characters. I found myself rooting for them and aching to come back to the book whenever I had to stop. The setting is sort of wild-west, while being ruled by an uncaring company agency. It made me think of how our own railroad workers may have lived...except that this is on a totally different planet. Overall, I found the book fun and leaving me wanting more.

As for the narrator, she is very talented but took some getting used to before I decided I liked her for these characters. But by the end, I was hoping the next book will be read by her.

Absolutely, and in fact I have. I think anyone interested in Sci-Fi or Fantasy would love this book.

All in all Hunger Makes the Wolf was a fun that tells an fast paced and engaging story that leaves the reader desperately hoping for a sequel.

It has the feel of an old western, and just a hint of a 1970's distopia on a world millions of light years away. The stage is set for what promises to be an amazing saga. I can't wait for the next one!

Is Too Young-Sounding of a Voice a Thing?

I hate to give such a low rating to Ms. Rawlins, who is obviously very talented, but her voice just didn't fit this story to my ears. She sounded too young for most of the voices, and while she is very talented at doing accents, they served more of a distraction than keeping me focused on the story. It's a hardened Western in a SciFi setting, but her voice lacked the depth and age that the story wanted to tell.

It could be if the narrator did not put me off instantly, narrator comes acroos like a child pretending to mockingly put someelses voice on and its horrible.

Would you recommend Hunger Makes the Wolf to your friends? Why or why not?

Maybe the non audiobook version as the premise was promising.

The main characters voice was fine but when ever she attempts to do any other character is just painful to listen and completely made me lose focus on the story eliminating immersion.

Do you think Hunger Makes the Wolf needs a follow-up book? Why or why not?

No idea was never able to finish

Maybe bringing in another narrator or or additional support actors would have made this more palatable, as it is i could not recommend this to anyone.