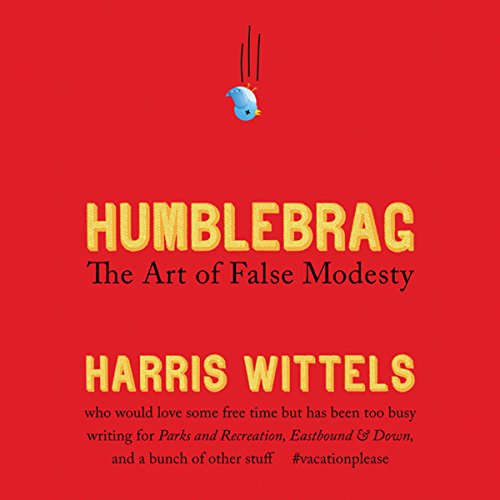 From comedian and writer (Parks and Recreation, Eastbound & Down) Harris Wittels comes a hysterical breakdown of boasts, brags, and self-adulation disguised as humble comments and complaints - based on his popular @humblebrag Twitter feed.

Something immediately annoyed Harris Wittels about Twitter. All of a sudden it was acceptable to brag, so long as those brags were ever-so-thinly disguised as transparent humility, such as:

"I hate when I go into a store to get something to eat and the male staff are too busy hitting on me to get my order right :( so annoying!"

Taking action by naming this phenomenon and creating the Twitter account called Humblebrag - dedicated solely to retweeting the humblebrags of others - Wittels's new word took the Internet by storm. Harris also shows readers what humblebrags might look like from some of history's most notable names, as well as devoting an entire chapter to a man who just might be the greatest humblebraggart of them all...

"I haven't read this, and never intend to, but Harris is my friend, so I feel obligated to give him a 'blurb' for his book. He's a funny writer...I'm sure it's not that bad." (Aziz Ansari, comedian, NBC's Parks and Recreation)
"Great, Harris. This is a really good use of your time." (Mindy Kaling, comedian and NYT bestselling author of Is Everyone Hanging Out Without Me?)
"Harris Wittels is a hilarious performer and writer and with this book he has coined a new term for that thing that drives us crazy. But honestly, I don't know how I feel about this whole thing. It makes me nervous." (Amy Poehler)

What listeners say about Humblebrag

Cathartic to hear your sassy voice. We miss you.

What made the experience of listening to Humblebrag the most enjoyable?

Hearing Harris' voice again. It's hard to accept he's gone, it was too sudden and without goodbyes. But hearing him talk, sass, and joke for 4 hours is so incredibly cathartic.

What was one of the most memorable moments of Humblebrag?

Harris' sass and humor immortalized in 4 hours worth of shit talking twitter users for their shameless tweets.

His dry delivery of insults is sassy-humor perfection.

Thank you for these 4 hours of memories and emotions, Harris. It's both cathartic and hilarious. You'd appreciate how crazy you make me look when listening in public, Harris. People see me going from full-tilt laughter from the tweet-insults to quivering-lipped and quietly crying when realizing your gone, and your genius and your friendship is gone forever. :(

We love and miss you, Harris.

This book was a nonstop laugh session. I look forward to volume 2! I would recommend this for an honest look at the art of humblebragging.

Total waste of my credits

Interesting premise but I should have known you’d only need 5 min TOPS to flesh out the idea to satisfaction. I didn’t know what I was hoping for but I definitely didn’t get it from this book. I kept waiting for it to take off or hook me.... but nope.

Finished this in 1 day while doing data entry at work & had to fight back the laughs so I didnt look crazy to my co workers. Harris' humor was so unique. Listen to Harris' Foam Corner on the old Comedy Bang Bang podcasts if you havent!

I find this hard to even call a book

If you enjoy listening to your friends troll twitter then this is the book for you. This is pure crap. Anyone could write a book like this with little effort. He reads tweets and proceeds to shit on whom ever based on their humble brag. It's repetitive and therefore redundant. I want more than my money, I want my time back.

I have to agree with the last reviewer. For someone who has such contempt for the tweets of others, he certainly spent hours and hours reading them. He even put them into groups but even these were distinctions without differences. I think I was expecting some insight resulting from the amount of time spent reading and copying these things. But all this book does is copy the tweet, point to the obvious, copy the next tweet point to the obvious for page after page.

I understand that this is a matter of not managing my own expectations. I was hoping for insight. As polished as the author/narrator is, I think even he was becoming bored by the end.

The best purchase I have made on Audible!

I loved this book. It is hysterical. I actually laughed out loud every ten minutes or so. It is also an interesting study in human behavior and you can't help but think about some of the things you say or post on social media sites. The author is very insightful and his sense of humor is entertaining. I did not stop listening until it ended. I will listen to this again when I need a good laugh. I am going to be sharing this with friends. I have a new favorite audible book. Don't miss out on this one!

Not my cup of tea.

Interesting concept and insight into Twitter posts. I enjoyed it at first, but author comes off like a complete jerk after a while. Four hours of the same thing... over and over... and over.

Tiny Tweets with comments doth not a book make

I like the author's relaxed voice and his amusing wit, but the book itself consists entirely of one or two-line Tweets by both the famous and tediously semi-famous, which the author immediately mocks, puts down, or criticizes in a line or two (frequently deservedly). There is no plot, no development, no nothing! Just one Tweet after another, after another, after another, after... you get it.
This might make an entertaining and moderately interesting short article, but as a book, it's like a forest of matchsticks without a tree in sight.

Review of the audio book

Hello!
The audiobook narrator who read the text was clear , understundable and great.
It was good to hear the text when doing someting else at the same time.
Comedy was good aswell, but for my it didn´t make me laught.
Only one of the joke made me laught in this book.
But overall rate is good.
It´s great that you can hear your audiobook different places like on your browser, or android phone and even tablet and other devices.

I persevered with this for just over an hour.
It's bad at the beginning and seems like it gets worse the more you listen.