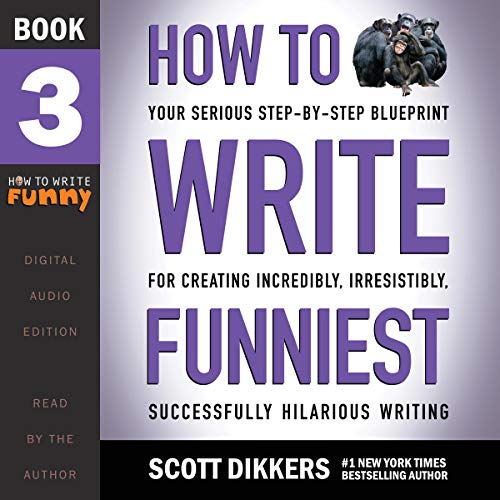 Take your comedy to new heights.

Learn more powerful techniques to make your comedy even more hilarious in this third book from the How to Write Funny series.

Harness the power of context, confidence, and a funny group of writers like the pros do on legendary TV shows like SNL or The Simpsons or at comedy institutions like The Onion.

Scott Dikkers will show you how it’s done. He’s cofounder and longest-serving editor in chief of The Onion, the world’s most popular humor publication, and founder of the Onion Training Center at the Second City in Chicago. He’s also a number one best-selling humor author, comedy performer, and winner of the Thurber Prize for American Humor.

How to Write Funniest lays out the simple steps to make your satire writing, humor writing, funny stories, or stand-up material the funniest it can possibly be by leveraging the brain power of a writers’ room.

But that’s just the beginning.

How do you lead a team of comedy writers, which insiders often say is like “herding cats”? How do you defeat stage fright, and what is context and why is it the most powerful tool in comedy?

What listeners say about How to Write Funniest: Book Three of Your Serious Step-by-Step Blueprint for Creating Incredibly, Irresistibly, Successfully Hilarious Writing