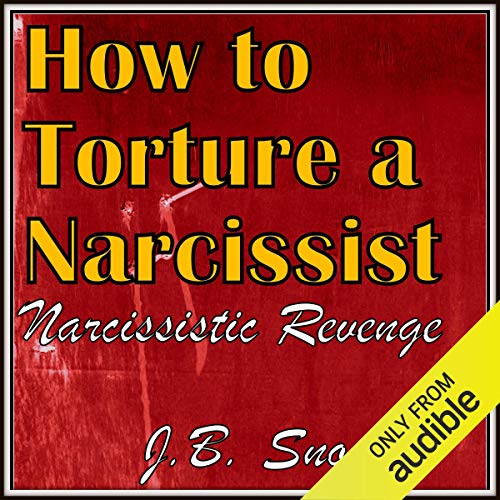 How to Torture a Narcissist: Narcissistic Revenge

The narcissist is a force to be reckoned with. He has a nihilistic view of the world. He views his life as pointless. He has no religion, and most narcissists will actively consider themselves as being agnostic or atheistic. He has no guided purpose in his life. He is bored and listless. The only thing that gives a narcissist real pleasure is seeing other people in emotional pain, confusion, and suffering at his hands.

The narcissist has no inborn empathy or sympathy that would make him have guilt over torturing another human being. He looks at those displaying emotions with curiosity. The narcissist himself cannot cry. Narcissists and psychopaths, in fact, can be caught at early ages trying to mimic crying of other children. They don't really understand what it is to feel deep emotions or deep bonds with others.

Narcissists continuously involve themselves in escapism or mundane tasks which busy themselves but which give them almost no pleasure. A hedonistic narcissist will do nearly anything to avoid real work or anything that reeks of effort in order to do whatever it is that is pleasurable to him at that moment in time.

What listeners say about How to Torture a Narcissist: Narcissistic Revenge

With domestic violence so covertly rampant in out society, this is bad advice and encourages risky maneuvers. You will not win against a genuine narcissist. Plan your secret escape plan to yourself, seek help, then run! As quietly and as fast as you can.

A helpful book with added humour. A must read .

Must read. All her tips work. I figured this out at young age, i threw routine out and confused them and i made them think i spoke to my teachers and friends..i didnt though ..thats my only regret but in saying that they arent that smart they have only 1 need.....hope you have fun leaving. I sure did lol. Thats why it found the book humorous because its true... it works.
Be safe

Kind of scary !!! Being involved in this type of relationship has changed me forever. The highs and lows were just that, highs then lows. I fear for anyone who might be going through what I'm going through now. Educate yourself, educate your children, strangers, anyone you can. The book was very insightful, while making me feel sad for being tricked.

This is a terrible book

This is easily the worst advice I’ve ever heard of. After about 10 minutes of laughing at this, as if it were a joke, it became apparent the author isn’t being satirical.

All of the “advice” here is extremely codependent and unhealthy. I’m waking away from this book, with a little lower value of humanity .

If you have real experience with a narcissistic partner, please do not read this book. Rather, seek a processional therapist. Healing from that kind of relationship does not involve revenge. It involves bravely facing the emotions that allowed you to become involved with a narcissist.

How to make your life miserable

I was curious about the title. My ex, whom I co-parent with, comes off as a narcissist. Although I have sole custody, I was curious of the “advice” it had for someone dealing with such a person. This seemed more like making yourself miserable by obsessing over trying to hurt the narcissist. In my experience, these people don’t have a conscience or feelings. They just move on the next, whom they’ve had lined up all along. So do yourself a favor and don’t consume yourself into this miserable lifestyle.

Well that was short

I didn't love it. I could have finished this in one setting and I didn't learn anything new. This was a waste of my time.

what dr wrote this?

worst book of all time. fire doesnt fight fire it creates a bon fire. this book is ridiculous

not as productive as I thought

This book describes a narcissist perfectly, but most advice won't work from my experience. My ex husband is very smart and even after divorce, manipulates me and our children. He has taken my kids but ignoring him or trying to warn others of his behavior is futile. He is the best manipulator I've ever met and most of the advice in this book I went through when we were together. This book tells you how to antagonize him, which in my experience, just makes things worse. I want to know how to stop him and truly over come his ways so me and my children can have peaceful lives.

If you live with a narcissist this is the book

It is a good book if you need to get a handle on dealing with narcissist in a marriage type relationship. I was looking more at how to deal with a narcissist in a work setting.

i needed to hear this to empower myself to move on from a nasty person. man they hide behind charm but they are terrible control addicts, liars, stalkers, heartless, and <insert bad name here>. pay attention to a person that exhibits these characteristics then run away!

Be very careful when using these techniques

The book this the nail on the head, but be careful with the advice. It can and will back fire choose your advisory carefully.

This doesn't really focus on what a man who's dealing with a narcissist should do. Some of the things covered will work, but this is too focused on attacking male narcissists.