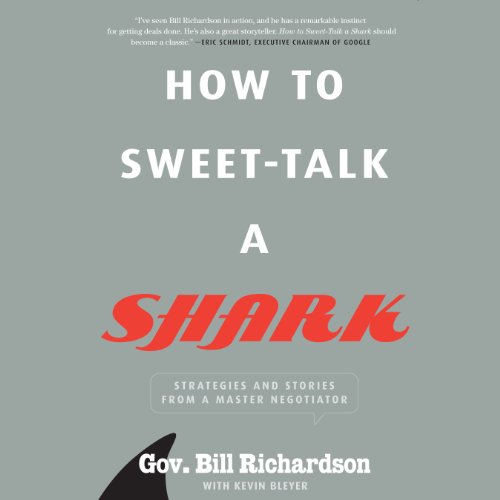 How to Sweet-Talk a Shark

Sharks are not evil. But they're single minded and very, very hungry. On land, they take the form of bosses, businesspeople, colleagues, family, and sociopathic neighbors. In the world of former governor of New Mexico and US ambassador to the United Nations Bill Richardson, they have taken the form of the most powerful people in the world.

He's engaged in high-stakes, face-to-face negotiations with Castro, Saddam, the Taliban, two generations of North Korean leadership, and many more of the world's most infamous dictators - and done it so well he was known as the "Undersecretary of Thugs" while with the Clinton administration. Now the 5-time Nobel Peace Prize nominee tells these stories - from Washington, DC, to the Middle East to Pyongyang - in all their intense and sometimes absurd glory.

How to Sweet-Talk a Shark is a rare, candid, and entertaining glimpse into an insider's world of high-stakes negotiation - showing Richardson's successes and failures in some of the world's least friendly places. Meanwhile, listeners get frank lessons in the art of negotiation: how to prepare, how to size up your opponent, how to understand the nature of power in a standoff, how to give up only what is necessary while getting what you want, and many other strategies Richardson has mastered through at-the-table experience - and from working with other master negotiators like Presidents Obama and Clinton, and Nelson Mandela. These are takeaways that anyone can use to negotiate with the power brokers, deal makers, and, yes, the hungry sharks in their own lives.

What listeners say about How to Sweet-Talk a Shark

No.. It is filled with interesting stories, but if you're trying to improve your negotiation skills, this is not the book for you, despite the billing. It's just not going to make you a better negotiator. The "lessons" in strategy are largely completely implicit, if anything at all, and very rarely does the author actual explicitly state "do this" or "don't do this". Maybe I'm not an advanced negotiator or something, I don't know, but this book taught me very little, and was not what I was going for when I purchased it.

What was one of the most memorable moments of How to Sweet-Talk a Shark?

I enjoyed the stories of negotiating with Castro and his insane dandruff problem.

What aspect of Clinton Wade’s performance would you have changed?

I swear to god I thought this book was being delivered as text-to-speech at first. I even highlighted the description on Audible's site and on my Mac using Safari, right clicked the highlighted text and clicked Speech -> Start Speaking and it sounds almost exactly the same as the narration of this book. It wasn't until the narrator started doing foreign language impressions that my doubt was removed and I realized it must be a real guy reading it.

It's an interesting book... it's just not going to make you a better negotiator.

it's the life of a politician

decent information on how politician live throughout there term. The few negotiation lessons are indeed interesting to know

Inesting story, but not really a guide

I expected more of a focus on techniques rather than Richardson sharing some personal career episodes. There was some but sharing if techniques and strategies albeit loosely framed.

US Politicians life story. I'm not from USA

Bought this audio book to brush up on Negotiating skills. Did not help that much.

Great stories about how Richardson sweet talked some sharks.

Great stories about the politics of world affairs. This book gives great insight into what goes on in the world behind the scenes of keeping the world safe and getting things done. I do not agree with Governor Richardson's view about the access of information collected by the NSA, but I loved how truly honest he was in this book about his success and failure as a political negotiator during his years in public service. Bill Richardson's ability to weave a story and make some of the most ruthless men in world history seem almost likable is fascinating.
I wish that the book was truer to its name and helped the reader sweet talk sharks or at least be able to better negotiate with people. Would have been nice to have a list of bullet points to go along with the stories.