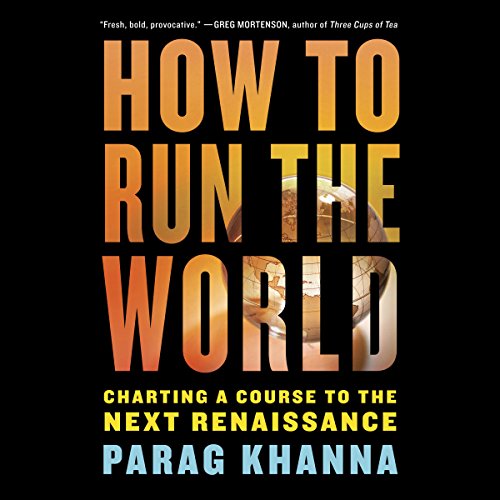 How to Run the World

Here is a stunning and provocative guide to the future of international relations—a system for managing global problems beyond the stalemates of business versus government, East versus West, rich versus poor, democracy versus authoritarianism, free markets versus state capitalism. Written by the most esteemed and innovative adventurer-scholar of his generation, Parag Khanna’s How to Run the World posits a chaotic modern era that resembles the Middle Ages, with Asian empires, Western militaries, Middle Eastern sheikhdoms, magnetic city-states, wealthy multinational corporations, elite clans, religious zealots, tribal hordes, and potent media seething in an ever more unpredictable and dangerous storm. But just as that initial “dark age” ended with the Renaissance, Khanna believes that our time can become a great and enlightened age as well—only, though, if we harness our technology and connectedness to forge new networks among governments, businesses, and civic interest groups to tackle the crises of today and avert those of tomorrow.

With his trademark energy, intellect, and wit, Khanna reveals how a new “mega-diplomacy” consisting of coalitions among motivated technocrats, influential executives, super-philanthropists, cause-mopolitan activists, and everyday churchgoers can assemble the talent, pool the money, and deploy the resources to make the global economy fairer, rebuild failed states, combat terrorism, promote good governance, deliver food, water, health care, and education to those in need, and prevent environmental collapse. With examples taken from the smartest capital cities, most progressive boardrooms, and frontline NGOs, Khanna shows how mega-diplomacy is more than an ad hoc approach to running a world where no one is in charge—it is the playbook for creating a stable and self-correcting world for future generations.

How to Run the World is the cutting-edge manifesto for diplomacy in a borderless world.

"By exhorting leaders to make use of new, open technologies that encourage more diverse and dynamic marketplaces, Parag Khanna makes a powerful argument: the world can become smarter than the sum of its parts. We need to pay attention to his ideas." (Eric Schmidt, CEO, Google)
“Khanna writes clearly, with conviction and charm, and his neomedieval metaphor is intriguing.” ( Publishers Weekly)

What listeners say about How to Run the World

This comprehensive and necessary review of global affairs and diplomacy by Parag Khanna makes a critical point: to save the world from ourselves we must take individual responsibility and look for local a such as global solutions. While a bit carping at times, Khana makes a compelling case for public-private and citizen driven reforms to global affairs.

Khanna offers a fresh look at today's problems. As an active duty member of the military, I have spent too much time in the areas that Khanna is focused on, and I find his analysis and recommendations highly insightful. Clearly an up and coming voice in today's geo-political discussion - and a much needed one!

What I liked in the book: the observation about everyone being a diplomat of his/her country, culture and/or institution, of the fact that NGOs can be more flexible than nation-states, and the acknowledgement that NGOs, corporations and even single people are important political players in todays world. This is the reality and it certainly should be embraced in one way or another.

However, apart from this, the rest 4/5ths of the book is over-optimistic praise of the actions of said players, at the expense of nation-states with some ideas that contradict each other and present the author's shallow understanding of history or economics mixed in with hopes and dreams of some globalist institutions and think-tanks.

After reading the first part it almost looks as if the good ideas (decentralization of power, initiatives that come from bottom-up instead of top-down) were really a bait and switch for presenting another Utopian vision of the world, which is not a result of proposed changes, just a place where the power was transferred to other big players.

All this also suffers from the one-sided look at human nature, without any serious consideration of the dark side - the thirst for power, the love of money, fraud (praising Khaddaffi's Sovereign Fund in the light of recent events in Libya is really a good illustration of author's bias), racial and ethnic hatred, and all other things that also make us human.

Overall the book is shallow, optimistic, and misleading. It might be important to read it to know that there are people who think this way, and who also have important voice in current world of politics, but apart from that - buyer beware.

I was looking for something based in fact as opposed to opinion. I would not want to live in a world run by Khanna.

I first saw Parag Khanna talk in 2016, and I found his vision of how connectivity changes the global order inspiring. But this work presents little more food for thought than his one hour speech at the Smart City Expo.

This book does a decent job of outlining emerging trends, and providing examples of the actors of these trends.

I find this book falls short of the mark due to its prescription to simply do more of what is currently being done. Rather than trying to envision how the emerging trends he presents are likely to truly change the world order.