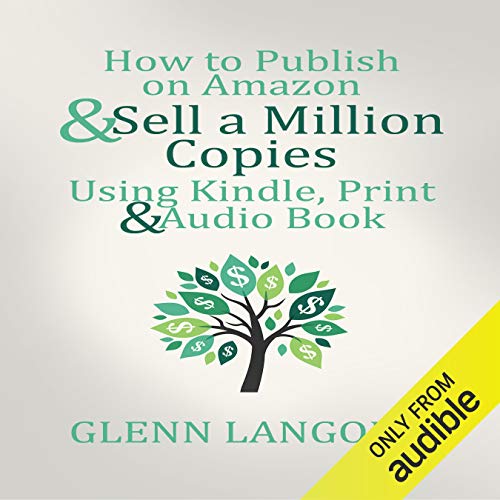 Want to earn royalties as an author and publisher and sell a million copies? Glenn Langohr shows you exactly how he did it.

What listeners say about How to Publish on Amazon & Sell A Million Copies Using Kindle, Print & Audio Book

I just wrote and published a book on Amazon and it took a lot more work than expected. Not only that, but figuring out how to sell it and price it was not easy. The book was getting very little attention. This book walks through how to market and grow book sales. It has been one of the most helpful resources I have found so far and recommend it to anyone who is thinking about publishing or already has published.

The most clear way how anyone can 1 be an author and 2 how to get it done. The step by step detail is phenomenal and I'm due to hit publish next week. Thank you beyond measure Glen for such an awesome perspective. Also the audible made it seem as though I just took a college class and sat for lecture. I grasped and understood everything.

I found this book very useful, it helps to make the process seem much easier as opposed to daunting. I am finishing my book this month band have notes from this book that I will be putting to good use. Thanks for a great resource Glenn!

Listened through whole thing: not worth a nickel. Should have realized the moment he brags that if he comes up with an idea that will justify 60 pages, he counts it as a book that he can throw at the wall and see if it sticks long enough to dupe people for money. This guy and his type are the ones that give self publishers a bad name.

This author is pitching garbage. Every word in this so-called book is utter nonsense. He is ripping you off even to read this review. He is encouraging others to rip off readers. I’m reporting this mess to Audible!

Some useful info, but terrible advice/narration

Author is definitely not meant to do voice-over work, as his narration was just bad and the quality of the audio was terrible. At first, there seemed to be useful info, but quickly realized when I listened further along how he emphasizes quantity over quality. He even admitted to writing books that have hardly any pages about topics he hardly knew and topics he "just did some research about". Only a few things were said that I found useful, the rest was trash.

I'm on my third time around, listening. I bought the Kindle version, as well. Since the book is a bit dated, several things weren't as they were described, but everything that was talked about was easily found, regardless.

I've been aiming to sit down and write for a long time. Buying Scrivener, MS Office, a new laptop and a few other books. This was just a few weeks ago that I listened to this book for the first time. Since the boost to the hope circuit, I talked about in the headline, I have decided to stop being an oral writer... that is, someone who just talks about writing, to actually get down to writing. I've started on a psych book on three differences each of us faces in regard to uniqueness and finding reason in one's life and a second book about biblical apologetics. I'm totally stoked about the second book, as I'm up to 19,814 words, and am just about halfway done with pulling information together. I know that I have quite a way to go, but I'm totally up for it!

I have never before gotten to this point, and the biggest thing is that I've not faced any of the times of depression I have to deal with every few days! (And no, I'm not bipolar) Glenn's book was the spark that I needed! I now have a list of things I KNOW that I can write about. It's funny, but I could never even come up with one thing to go on about, before this book.

The way that Glenn talks in this book isn't the most polished. I do voice-over work, and I cringe throughout this book. I really don't consider that a drawback, though. I hear the voice of a guy who has a message to share, and the conviction I hear throughout the book is something that has caused me to orbit back, now, for the third time.

I've gone through and set up accounts for my banking, Kindle Direct Publishing, and even CreateSpace, with its move over to KDP. The community that's talked about in this book is also a great motivator. Trust me, I'm a cynic's cynic. It's not that I'm a non-believer with stuff, but I do check things out. With Mr. Langohr's handholding, one is taken from idea to finished product, with plenty of stories in between. Mark me as a true believer. Books are forthcoming. :-)

awesome book. thank you for explaining how to publish my books on kindle and audio.

easy listen and to the point

this book is easy to consume and helpful, to the point and easy to follow recommendations

Information packed book! Easy to follow and very helpful to my first book project. I expect to use a large amount this authors instruction.

i'm looking to get started with KDP so this was very useful, nicely paced and didn't stretch out the topics, very good