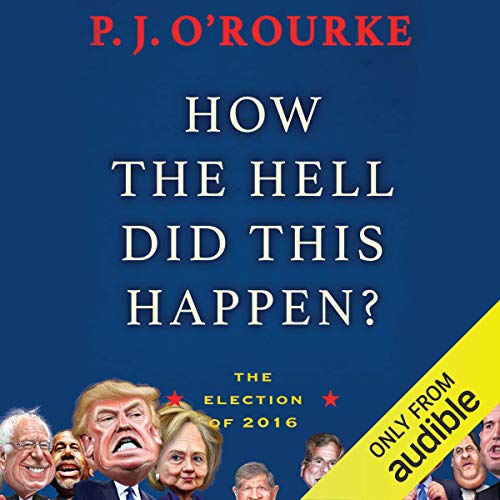 How the Hell Did This Happen?

This election cycle was so absurd that celebrated political satirist, journalist, and die-hard Republican P. J. O'Rourke endorsed Democratic candidate Hillary Clinton. As P.J. put it, "America is experiencing the most severe outbreak of mass psychosis since the Salem witch trials of 1692. So why not put Hillary on the dunking stool?"

In How the Hell Did This Happen?, P. J. brings his critical eye and inimitable voice to some seriously risky business. Starting in June 2015, he asks, "Who are these jacklegs, high-binders, wire-pullers, mountebanks, swellheads, buncombe spigots, four-flushers, and animated spittoons offering themselves as worthy of America's highest office?" and surveys the full cast of presidential candidates including everyone you've already forgotten and everyone you wish you could forget.

P. J. offers a brief history of how our insane process for picking who will run for president evolved, from the very first nominating convention (thanks, Anti-Masonic Party) through the reforms of the Progressive era (because there's nothing that can't be worsened by reform) to the present. He takes us through the debates and key primaries and analyzes everything from the campaign platforms (or lack thereof) to presidential style ("Trump's appearance - indeed, Trump's existence - is a little guy's idea of living large. A private plane! A swell joint in Florida! Gold-plated toilet handles!"). And he rises from the depths of despair to come up with a better way to choose a president. Following his come-to-Satan moment with Hillary and the Beginning of End Times in November, P. J. reckons with a new age: "America is experiencing a change in the nature of leadership. We're getting rid of our leaders. And we're starting at the top."

What listeners say about How the Hell Did This Happen?

A Never Trumper walks into a bar, stop me if you'v

You know it's TDS when the author lists everything wrong HRC but still calls her most qualified...

P.J. O'Rourke was my favorite writer starting with National Lampoon and lasting for somewhere around ten books' worth of his work. His quality of seeing through the fog to humorously explain the reality of politics was the draw that made me a loyal reader. He has lost or forgotten his gift and this book was disappointing. He still possesses an extraordinary vocabulary with which he still matches words that nobody else would see as related until he pairs them. But, he has tossed his logical foundation and now promotes an unconservative point of view. His stated disgust with President Trump and reluctant acceptance of Hillary Clinton demonstrates how unmoored his thinking has become. His decline in attitude is consistent through the book to the point that I think that, if you're looking for a happy ending, it would be better read from back to front.

Taking sarcasm to the limit.... and beyond. An equal insulting rant of both political parties and very funny.

The writing knocked it out of the box as always...

The writing knocked it out of the box as always... but OK actually narrating his own book... priceless!

If you attend Big Lebowski reunions, you will think this is revelatory, especially after you stop coughing from a couple fierce bong hits. Back in my dorm days, I would have thought so, of a guy this glib and clever and flowing over with pop-culture and history references, like a kaleidoscopic 360-degree puking of colorful, fuzzy peyote chunks (not that I would know; to slip into this guy's sly idiom, I never inhaled peyote) but that would be, for me, 42 years ago. It is colorful, it is flashy, it is clever in its way, it grabs images from anywhere even inside of one sentence, from cartoons to great works in poly-sci to whatever is in the guy's head this moment. It is often, IMO, anxiously dancing way, way too hard in such manner as, back in the day, to impress the freshman girls (sexist idiom of those times) in the dorm. This style, gonzo journalism, appeared in politics (once it escaped the oral-crowd-scene college outbursts of the 60s, which are referenced herein) as early as Hunter S. Thompson's Fear and Loathing on the Campaign Trail '72. And here is a guy schlepping this old schtick well into the 21st century. But, given the manifest laughing-crying bad-trip absurdity-scariness of our political times, the fit isn't that bad. If one can wade through all the flying flotsam (and yes P.,J., I got every last one of your pop or history or whatever references, sentence by sentence), this author alongside the over-amped facility with phrasings, does have some serious insights into our times and these players, and he makes a heck of a cartoon of everybody in sight. I needed a laugh. His portrayals of Hillary particularly made me guffaw and almost spit chunks myself. The tedious part happens when he wanders, not infrequently, off into some fantasy digression and one can wonder whether he is flashing-back, like, two-thirty in the morning and the dorm chicks (slang usage of the time, sexist, whatever) have long since gone home and he's still stem-winding some sort of abstruse loopy concept. If you can follow this review, you might actually enjoy this book. I did. But I have a shared experiential background, if a shade less hippie. As for the narration: he did it himself, and he managed to vividly revive in memory those DJs in the early 70s who went to great lengths to sound like the most stoned people on earth, a sort of sly looping baritone. There's something about intonations rooted in those times -- a slice of authentic Americana. Spark up!

Loved it! I will recommend it. PJ O'Rourke is one of my favorites. Great reading.

Funny and interesting. I liked the book, but the ending seemed rushed. Overall good read.