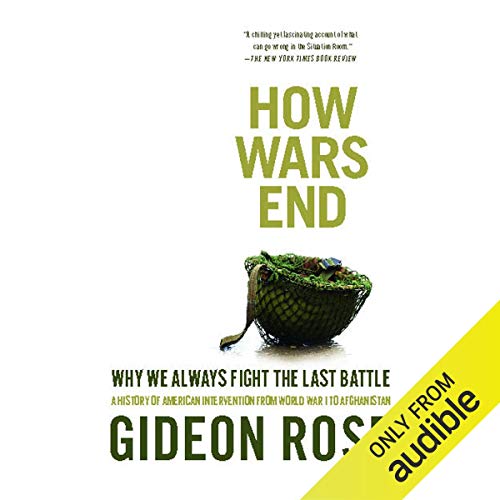 In 1991, the United States Army trounced the Iraqi army in battle, only to stumble blindly into postwar turmoil. Then, in 2003, the United States did it again. How could this happen? How could the strongest power in modern history fight two wars against the same opponent in just over a decade, win lightning victories both times, and yet still be woefully unprepared for the aftermath?

Because Americans always forget the political aspects of war.

Time and again, argues Gideon Rose in this penetrating look at American wars over the last century, our leaders have focused more on beating up the enemy than on creating a stable postwar environment. What happened in Iraq was only the most prominent example of this phenomenon, not an exception to the rule. Woodrow Wilson fought a war to make the world safe for democracy but never asked himself what democracy actually meant and then dithered as Germany slipped into chaos. Franklin Roosevelt resolved not to repeat Wilson's mistakes but never considered what would happen to his own elaborate postwar arrangements should America's wartime marriage of convenience with Stalin break up after the shooting stopped. The Truman administration casually established voluntary prisoner repatriation as a key American war aim in Korea without exploring whether it would block an armistice - which it did for almost a year and a half. The Kennedy and Johnson administrations dug themselves deeper and deeper into Vietnam without any plans for how to get out.

Drawing on vast research, including extensive interviews with participants in recent wars, Rose re-creates the choices that presidents and their advisers have confronted during the final stages of each major conflict from World War I through Iraq. He puts listeners in the room with U.S. officials as they make decisions that affect millions of lives and shape the modern world - seeing what they saw, hearing what they heard, feeling what they felt.

"This is a brilliant book on an important subject. Americans are always disappointed with the outcomes of wars and the troubled peaces that follow. Gideon Rose explains that this is because of the way we think—or don't think—about war and peace. The book is a masterpiece of historical analysis with lessons for our strategy in Afghanistan and beyond.” (Fareed Zakaria, author of The Post-American World and editor of Newsweek International)
“Gideon Rose’s wise, trenchant review of the last century of world conflict is one of the startlingly rare books that gets the connection between war and politics, means and ends.” (Fred Kaplan, “War Stories” columnist, Slate)

What listeners say about How Wars End

This is one book that will give "ah ha" moments, but there are some "oh my gosh" moments here too. Each chapter is a stand alone discussion of a particular conflict and how it was resolved. A high point for me was the revealing section on WWII in the Pacific. This book lends value to the reader because it looks solely at how particular encounters were ended and what motivated the end. There are a lot of insights to be gained from this approach and analysis. This is, above all, a thoughtful volume - well written, informative, and professional read by the author himself.

Gideon Rose has provided an illuminating and very interesting perspective on war: how combatants bring them to an end, specifically the United States. The book provides detailed end notes. Rose writes with confidence. He also does a good job narrating the book for Audible.

Begin at the End

Gideon Rose spends each of his chapters examining the consequences of US policy and actions in conflicts since WWI. Using various international relations and organizational theories he explains how momentum, confusion or personality led to many of the mistakes of the past. In the end, he counsels to begin at the end. Stable government is the endstate sought and all actions of forces and policy should be towards that end. As a military planner, that is where plans naively begin but are often trumped by shortsighted priorities. A book worth the read but if you are a history buff, don't anticipate any new insights.

The book becomes somewhat redundant about halfway through. Also, the writer has a complex style, uses many commas, and at times makes it a bit tricky to decipher and comprehend. All together, some great learning points though.

Stopped listening about half way through to finish some other audible books. But after I finished those then I went back to listening to this one. The book skips around, first it discusses Iraq signing the surrender documents after the first Gulf war but then it starts from the beginning of the build up. Does that for other events as well.

Yes, it covers very important topics and is an excellent book.

Who would you have cast as narrator instead of Gideon Rose?

Anyone, Gideon Rose is a smart guy, but somehow he totally managed to mispronounce things like Bin Laden, etc. It is unbelievable. I thought the book was read by someone else, but sure enough it is not. I don't understand how it cane be so bad.

Would you recommend How Wars End to your friends? Why or why not?

No. The narration is too monotone. Very boring way to read a book.

Who would you have cast as narrator instead of Gideon Rose?

I don't know many readers but anyone who can do presidential impressions and change the tone of the speakers in the book would be way better.

I just found out I can listen to samples. Would have avoided this book if I recognized that ahead of time.

an interesting and thought provoking book

Good book but totally US centered didn't look at how wars end in general as the title suggests.