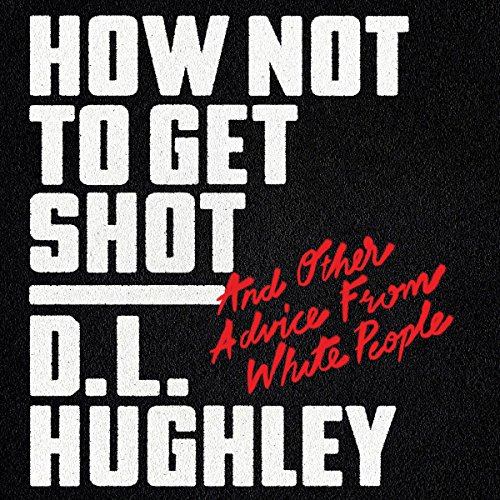 How Not to Get Shot

A cutting satire of race relations in the age of Trump and Black Lives Matter from the hugely popular comedian - one of "The Original Kings of Comedy" - and author of the New York Times best seller Black Man, White House.

"White people are always giving out 'helpful' advice, such as: 'Comply with the police and you won't get shot.' They've been doling out advice to black people ever since 'I suggest you pick the cotton if you don't like getting whipped.' Not getting shot by the police has long been a problem for black people. Even when we had a black president! Now that we have a new set of overlords, with President Trump at the head, wouldn't it be nice to get a little advice on how not to get shot?"

From the elections of Barack Obama and Donald Trump to the tragic events of Ferguson and Charlottesville, the subject of race has come to the forefront of American consciousness. Legendary satirist D. L. Hughley offers his own cutting observations on this contentious issue that continues to traumatize the nation, a wound made more painful by the ongoing comments and actions of the 45th president.

Hughley uses humor to draw attention to injustice, sardonically offering advice on a number of lessons, from "How to make cops feel more comfortable while they're handcuffing you" and "The right way to wear a hoodie" to "How to make white food, like lobster rolls" and "Ten types of white people you meet in the suburbs."

How Not to Get Shot is a much-needed antidote in these distressing times.

What listeners say about How Not to Get Shot

Great until the Homophobia & Transphobia

This book made great points about racism and hypocrisy through humor, but it took a distasteful and nasty turn in the last 5 minutes. The author was very dismissive and ignorant about the struggles that queer and trans people have faced, and the comparison of black and sexual/gender minority struggles was so incredibly unnecessary and counter-productive. The author states "Our rights were a little more hard fought. Listen, we had several civil rights leaders assassinated, we were hung, water-hosed, jailed." The rights of black folks, queer folks, and black queer folks have all been hard fought and are still being hard fought. Black, queer, and black queer folks have all been systematically killed, assaulted, criminalized, ostracized, excluded, and jailed. People with these marginalized identities should be working together, should support each other, should learn about each other's histories and cultures, not criticize and compare.

Thanks! Great book and fantastic performance. For a white European it’s an education on racism and history of America for a bit better point of view. Yes I’m from Norway and yes most European comes here to see the wonders and stereotypes of this great nation! Funny and a lot of pointers for tourists that will come in handy :)

This latest entry by Mr. D.L Hughely does not disappoint. Even though this may be considered satire it brings up very relevant issues in our society.

A pointed commentary on the state of race relations wrapped in some seriously funny sh*t. If you haven't read it, why?

As a black man who is about to turn sixty. I was born in 1958. When civil rights for back people, were not, yet, realized. I have seen the first black president elected; and also saw the hatred, and disrespect he received. Donald Trump was a major force in the movement to discredit hlm. Now he is trying to erase his legacy. I am witnessing the dismantling of the civil, and voting rights act, that began, when I was born. The nation is so divided. And there is no love. D.L. has always been beacon for black people. His tv series was groundbreaking; Although it was a sitcom, it dealt with race relations and social issues head on. That, tradition is carried on with shows like "Black-ish" and 'Fresh off the boat". His quick wit and ability to be humorous and brutally honest, allows all people to laugh, and learn about things, they never thought about.

Loved it. Captured the pain and expressed it in a comedic and intelligent manner. ✊🏾

Laugh at this one until you cry.

There may be some Dave Chappelle or Richard Pryor here – yeah, they’re the all-time reigning champs, I know – but I suspect there’s a heavy dose of Dick Gregory too. This is humor, humor about the weight of racism, but it’s humor focused as a studied political act. Hughley is performing pain and anger; he’s harnessing them into a performance.

At one time he jokes that he hopes his book will save just one person from getting shot, but not really. He wants it to save a lot of people because, if it were just one, he wouldn’t sell enough copies to make any money.

But, of course, he’s also deadly serious. He references far too many times when Black men – and sometimes Black women and Black children – have been shot for preposterous reasons: carrying a BB gun (unloaded) in a toy store on the way to pay for it, reaching for a wallet, saying “I have a gun” without reaching for it, or simply being large. He’s channeling real and abiding pain, but he knows how little Black pain seems to register in the larger world. So he’s making us laugh at the horror instead.

And, somehow, he keeps the laughs coming. At one point he goes into a tangent about police violence, noting that you know it’s a problem when they accidentally kill white people. He recounts a police killing of an Australian yoga instructor – blonde, no less – and refers to her as probably “the least killable person you can imagine.” “What’s next,” he muses, “Nicole Kidman?” That’s edgy but, with apologies to Nicole Kidman, it’s funny too.

Or there’s his quick analysis of the white dispossessed working class’s voting for Donald Trump because he promised to bring back the factory jobs that have mostly vanished. They don’t seem to realize, though, that it’s not immigration but automation that’s taken most of those jobs. As he puts it, “They voted from Trump, but they really needed DeVry.”

As an answer to the question of his title, he concludes with a biting final observation: What’s the best way not to get shot? Don’t be Black.

As a white person, it’s not my job to say much in response to this. My job is to listen. Hard as these truths are, I’ve done that with an admiration that only amplifies the power of the message.

This book was the most honest and satirical confrontation of the truth about race relations in period.

This was an insightful and humorous read. D.L. has an unique prospective that is easygoing but rooted in truth.

Summary: A standup around the idea of thinking about the advice that White people will give to Black people about how to not get shot.

How Not to Get Shot is probably best as an audiobook. Hughley knows how to present it for laughs and when to pull back and be sober. The book is mostly satire, but he does pull back relatively often from straight satire to comment on how ridiculous some of the advice is. Quite a bit of the nearly 4-hour audiobook is advice that you have either heard, thought (said), or can imagine someone you know saying.

Hughley has helpful section such as: comply with the police, don’t talk back, remember that the cops are scared, don’t match the description, what type of music to listen to, how to name your children, don’t rush to judgment if you do get shot, etc.

The main point is that the best way to not get shot is to not be Black. But since that isn’t really an option, his use of satire to help White people understand the ridiculousness of the common rhetoric around police and other shootings is thought-provoking, while being funny.

I think there is value in standup comics talking about racial issues. Humor is one way to lower defenses and get people to actually think about something that is rhetorically difficult.

DL has a funny but accurate take in the past that apparently influences our current socio-political landscape. Some will listen to this and see the funny, I urge you to look past that to the truth of how it applies or is taking place in your daily lives.

DL once said that when he was young his mother told him that sometimes you gotta laugh to keep from crying, and that's kinda how I see this book, a very serious topic but told in a very funny comedic way. As black people if we didn't spin some humor on things we'd be defeated already.

Funny but at the same time a reality. Hopefully someday we recognise the struggle. No just pity us, that we don't need as a race.

A very funny book with some extremely hilarious anecdotes. But also shedding light on in the real issue.

Whilst comedic and funny, it's also scary to think how easy it is for some to lose their life over something as innocuous as a brake light or wearing a hoodie. DL Hughley uses comedic genius to traverse such a deeply sensitive subject in a way that black people will find funny and white people may find uncomfortable, but that is the point. And although I live in the UK I am sometimes subjugated to the same stereotypes, and I think people of colour will feel regardless which country they live as long as they are the minority.

My experience and my truth..

need to explore my history more...