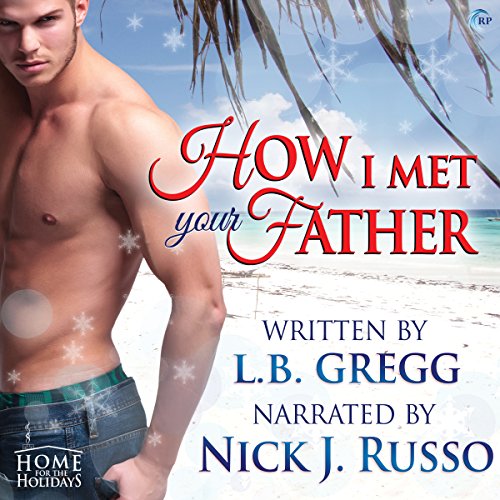 How I Met Your Father

The man of your dreams could be sitting right next to you.

Former boy band member Justin Hayes isn't looking for a man. He just wants a quiet, scandal-free Christmas at home in Chicago, out of the public eye. But his best friend and bandmate is subjecting everyone to his destination wedding, and Justin can't dodge the "best man" bullet. All he has to do is get to the island on time, survive the reunion, and get Chuck to the altar with as little drama as possible. What could possibly go wrong?

Jack Basinger's own plans for a quiet Christmas have been dashed by the summons to his daughter's hasty wedding with a man Jack has hardly met. On the bumpy flight to the island, he finds himself comforting a nervous - and extremely attractive - young man. One hasty sexual encounter in an airport bathroom later, they both feel much better. No one ever has to know, after all.

Now Justin and Jack must find a way to explore their attraction, despite the distractions of disapproving family members, unexpected announcements, an impromptu concert, and an island paradise that proves there's no place like home.

Note: 20 percent of all publisher proceeds from this title are donated to the Ali Forney Center in New York, whose mission "is to protect lesbian, gay, bisexual, transgender, questioning (LGBTQ) youth from the harm of homelessness, and to support them in becoming safe and independent as they move from adolescence to adulthood."

What listeners say about How I Met Your Father

Imagine that you see a woman walking down the road laughing hysterically at seemingly nothing.

This was me, walking my dog, getting strange looks by passersby. This had exactly the right amount of angst, humor, and smut to make me a very happy person.

Nick J. Russo is quickly becoming an auto-buy narrator for me. I love his character voices, his tempo, inflections...he just rarely goes amiss for me and this time is no exception.

It doesn't hurt that I also like the story; it's quick, fun and hot with some really good humor sprinkled throughout. Which anyone knows is my crack.

Entertaining, funny story but too rushed for the material. It was a good story that could have been excellent had it been longer. Excellent narration by Nick J. Russo.

I have to start off by saying the narration on this was amazing. I say this because of the number of different characters that he gave a distinct voice to. I was never confused by who was speaking in the dialogue. This was a cute story that was intended to be short but would give the standard HEA. I have to say that l enjoyed it but would have enjoyed this more as a longer book where we got to see more of the Jack and Justin together. There was also some key conversations that I am nosy enough that I wanted to see how those played out as well. Particularly between Jack and his daughter. She had some 'splaining to do : )

This is a perfect love story with life's humor thrown in. This is a short but good audiobook and the narrator is brilliant!!

such a fun premise how they meet where they're going and how they eventually get there. really well paced story and Nick Jonas Russo does the BEST job bringing everybody to life. very fun book to listen to.

This was an absolute delight for me. I laughed out loud so many times! I am quickly becoming a fan of Nick J Russo. His narration is always on point and he just makes the story that much better. This was a quick listen. There was some conflict but it was resolved nicely. There wasn't any penetrating sex in this book but there was sexual content. All around a really nice short story. I would have loved a little more story but I still finished this book feeling satisfied. :)

Too short but narrated well

Justin is the former leader of a boy band. He’s gay, but in the closet. He’s headed to the Caribbean to watch his best friend and former band mate get married. While on the puddle jumper to the island he experiences some turbulence and gets a helping hand from an older (hot!) guy in the next seat. This leads to a different kind of helping hand in the bathroom and it results in him missing the rehearsal dinner – but no biggie, right?

Turns out… the helping hand is the bride’s father – he’s pretty cool and laid back – but will Justin’s fans accept that he’s gay? Will Jack’s kids accept the younger man in his life? Can something like this mean anything in the long term?

The writing, the characters, the humor, the smexy times – were all wonderful. What failed for me was the giant leap we made from the last chapter to the epilogue. I feel like we missed at least 30% of the book in that leap. (Where we go from – hey we might have something, through – hey should we date? To – hey- I think we’ll live happily ever after). All of that was off page and just assumed in the epilogue – which was awesome, but not enough.

Nick J Russo kicked butt again! He did a wonderful job with all the various stoner voices, the growly dad, the tempting Justin and the bratty Benjamin.

I really liked the book (except for the brevity) and enjoyed listening to it and would love a re-vision that added another 2-3 chapters.

Would you consider the audio edition of How I Met Your Father to be better than the print version?

As I never had the print/ebook version, I can't tell you. But between the fantastic words of LB Gregg and the amazing narration of Nick J Russo, this story cannot be beat.

Is there a 'best'? I loved the humor, the subtle jabs at modern day, the voices, and the subject matter.

Which character – as performed by Nick J. Russo – was your favorite?

Ooh that's difficult. I, of course, love his regular narrator voice as he speaks from our hero's POV, and the fact I could tell the charactger by the voice he used, but if I HAD to pick a favorite, it would be between Jack and Chuck's voices. But it's hard to choose, because while I loved the voices he gave to those two characters, it was an entirely different character - Matt, who made me laugh the most of all.

I loved it. The humor that made up this story was so wonderful. And my favorite line is the title of a possible new song as spoken by Matt "My baby is having my baby" and believe me, until you hear him say it, (as well as all the baby jokes that had been made up until that point) you won't get the humor. I've now listened to it twice and it still makes me laugh out loud.

This was a wonderful find for this holiday season. I loved the characters and the story. I would suggest it highly to listen to at ANY time of the year when you want to read a m/m romance with a HUGE dash of humor.

OMG! This book was a wonderful surprise for me. L.B. Gregg is a new to me author and if this book is anything to go by I’m a new fan. The characters were colorful and funny. From the very beginning I was laughing. I loved the dialogue between all the characters but especially the brotherhood between the friends. Nick J. Russo was awesome and did an amazing job. I give the overall book and performance a 4.5⭐️

Yes, really enjoyed listening to this.

Have you listened to any of Nick J. Russo’s other performances? How does this one compare?

I think Nick's voice is great for audio narration, this is the second book I've listened to narrated by him and I've enjoyed them both immensely.

When Justin realised who he had had a quick few minutes was.

Justikn is going to the wedding of a close friend from his days as a member of a boy band. He has a chance encounter on the way to the wedding and then again at the airport whilst changing planes with the same man. This sets up the days of confusion and mixed feelings.

I had a problem with this story when I read it and that didn't go away in audio. There was far too much time spent with the band of friends and not enough with the blossoming romance.