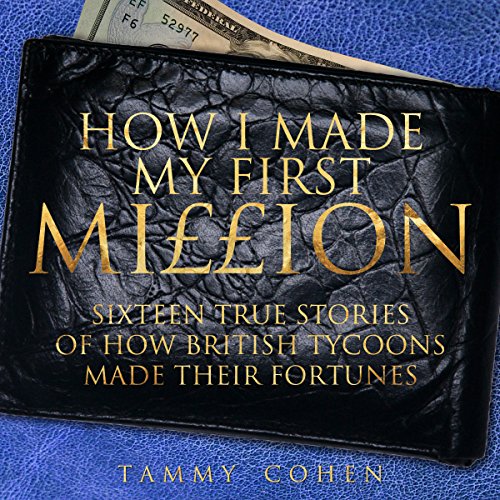 How I Made My First Million

Who doesn't want to be a millionaire? Well, if you have ever wanted to join the growing ranks of British millionaires, then this is the audiobook for you. Here, 16 self-made multimillionaires come clean about how they became filthy rich.

There's Andrew Reynolds, who grew up in a small caravan yet went on to make £30 million working from home. And Dominic McVey, who made a fortune importing scooters when he was just 14 and now, 10 years on, is head of a thriving cosmetics distribution company.

There is no such thing as a 'typical millionaire'. Some are middle-aged, others are barely out of school; some come from nothing, others reinvent themselves after changing careers. In fact, all they have in common is ambition, motivation and the ability to think big.

What listeners say about How I Made My First Million

Title says the book is about tycoons making their first million it should be at least the story of their beginning to establishment but it's just a series of consisted biographies.

None of the stories fully focus on the making the first million (or how they established / zero to one).

Also while the narator is ok, all stories being narated by the same person makes listening dull. You can't even figure if the tycoon is a woman or a man unless it's mentioned in the story.

Nice storyes for kids but for professionals it's kind of boring. It does not realy explain how they did it. It just says that they did it, and we new that from the begining.

No info on HOW they did anything

So I found it a bit boring. They just talk about themselves with self-congratulating stories. Hardly any info on actual tactics or strategies that these people used.

Interesting but no secrets to success

This audiobook is very interesting, but of course doesn’t reveal any secrets to success because there is no secrets to success, it’s just hard work and taking opportunities. After listening to the audiobook, that is clear as the thread of the narrative. There are books that break success down into actions. That is not this book. This book just gives you insights into 16 different millionaires’ stories; like mini biographies, which were interesting. Overall great book, and well read by the narrator.

Quite interesting, varied mix of people - personally I woukd prefer to hear the contributers rather than a narator throughout. Good idea though.

It's easy to look at successful people and understand that there was a process, time and determination to get where they are.

Very interesting read makes me feel it's never too late. I think younger people should listen to this too to understand that the only thing that the people in this book have that is different to them is 'time'. Would put the 'I want it yesterday' mentality into perspective.

Loved every story. Connected with the humanity of very successful people and a I'm taking some good advice for self growth.
But personally didn't like the narrator. Only because it sounded like someone reading a book for kids. Plus, would've preferred a female voice when convenient.

Some interesting stories. Learned a few things and gained some inspiration. Worth a listen in my opinion.

Very informative and straight to the point. One of the best audio books I’ve listened to.

A great audio book and very inspiring. This book has pushed me to pursue my goals and dreams.