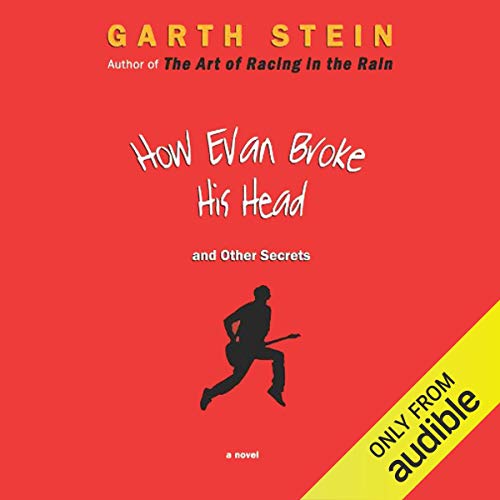 How Evan Broke His Head and Other Secrets

How Evan Broke His Head and Other Secrets

From Garth Stein, the New York Times best-selling author of The Art of Racing in the Rain, Audible presents How Evan Broke His Head and Other Secrets, winner of a Pacific Northwest Bookseller Award—in audio for the first time, and read by one of our most talented narrators, Oliver Wyman.

Thirty-one-year-old Seattle rocker Evan has been drifting. He had a hit single ten years ago, but lately he’s merely been getting by, teaching middle-aged men how to play the electric guitar. When his high-school girlfriend is killed in a car crash, he suddenly finds himself responsible for Dean, the fourteen-year-old son he’s never known.

Dean changes everything. Evan can't keep drifting now that he's a father. He will have to do something about his life if he's going to provide for the two of them. Partly this will mean finally confronting his own father. It will also mean facing up to the nagging, burning issue that is like a hole in his soul: the epilepsy that haunts him and threatens his every moment.

Great narrator of a fine story.

Oliver Wyman is a wonderful reader. His narration of Billy Lynn's Long Halftime Walk has been one of the highlights of my twelve years of listening to audiobooks. I find myself telling people about how great that book is regularly. How Evan Broke his head is nothing like that. The book stars Evan and his son Dean, and then there is a cast of characters around them. The plot moves slowly. Mr. Wyman is again a perfect narrator of the material.There are excellent moments, in which we see the father and son growing into enjoyment of each other. I agree with the reviewer who said that the author's fascination with the Seattle music industry seemed to be far greater than his interest in his own characters, and that is no doubt why the book flags so badly in the second half. There is a fundamental rule about parenting: once you are yelling, you've lost. This book is largely about learning parenting from scratch when the "child" is a fourteen-year-old adolescent. When Evan begins screaming at Dean, and Dean spits in his face and screams "I hate you!": this is the point at which the book becomes hard to tolerate. If you can keep listening, though, you will be rewarded. Evan does a number of dumb, self-destructive things, but in the end the father and son reunite, and they both are wiser for the experiences. I love Oliver Wyman, and I hope I can find another book that is anywhere near as fantastic as Billy Lynn. This book is worth the listen, but I hope to hear Mr. Wyman narrate another book that is even better. I can recommend this book to you, with the caution that some of it is really tough to hear. It is not for the skittish or the squeamish.

I admit that I got this book because it was a deal. I didn’t expect that I would like it so much. It had me captivated early on and I listened to it late into the night. I found the characters charming and lovable and at times so frustrating that I wanted to ring their necks. The characters were well developed. An excellent book. I highly recommend it.

this is my 3rd book by Garth Stein. loved it. Narrator was great too! recommend.

Yes - I love Garth Stein's writing style. He's such an engaging story teller. This story is frustrating and enthralling at the same time.

really enjoyed listening to this story.

heart felt and engaging. Oliver Wyman really drew me in with his interpretation and dramatic reading.

Pretty bad...considering the author's other work

Nothing, the story was so bad that the narrator didn't stand a chance.

What was most disappointing about Garth Stein’s story?

By the middle of the book, all of the characters were quite pathetic and not very like-able, including Evan. By the end, there was no one you were siding with or even rooting for. I just wanted it to end, And don't get me wrong, I love a good pathetic character (Christopher Moore books at full of them), but you have to make them like-able and want them to triumph. Garth Stein spent most of his energy describing (over-describing) the Seattle music scene, which seemed to be more interesting to him than his characters. Same with the over-indulgence of epilepsy descriptions.
Just to note, if Evan's epilepsy is such a big secret, then how does everyone not notice his medical ID bracelet. Trust me, I had to wear one, everyone can see it and know it's not jewelry. This is just one example (of many) that makes the story so thin that only extremely good characters could overcome the weakness. And that just didn't happen here.

even, clear and articulate

Garth Stein is always Real and doesn't hold back. He keeps my interest and paints a picture of modern real life.

Another great Audiobook from Garth Stein

Where does How Evan Broke His Head and Other Secrets rank among all the audiobooks you’ve listened to so far?

I loved Garth Stein's Racing with Rain so much as an audible book that I researched for another one by that author. The narrator did such a wonderful job again. Totally kept me engaged.

Evan of course. It was nice to see his growth thru the book.

What does Oliver Wyman bring to the story that you wouldn’t experience if you just read the book?

Great voices for different characters. And love the quieter voice he uses for what Evan is thinking

Very entertaining. Made me want to get in the car to commute!!

This is the second Garth Stein I've heard. I will now listen to all the rest. Writing style that I find fascinating and narrated superbly particularly the end where the final wrap comes across with absolute clarity. Garth Stein has an amazing way of seeing and describing things that resonates with me, i am sure many others feel the same