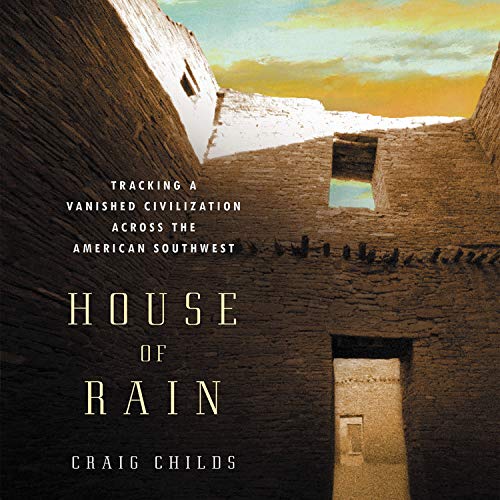 In this landmark work on the Anasazi tribes of the Southwest, naturalist Craig Childs dives head-on into the mysteries of this vanished people.

The various tribes that made up the Anasazi people converged on Chaco Canyon (New Mexico) during the 11th century to create a civilization hailed as "the Las Vegas of its day", a flourishing cultural center that attracted pilgrims from far and wide, and a vital crossroads of the prehistoric world. By the 13th century, however, Chaco's vibrant community had disappeared without a trace.

Join Craig Childs as he draws on the latest scholarly research, as well as a lifetime of exploration in the forbidden landscapes of the American Southwest, to shed new light on this compelling mystery. He takes us from Chaco Canyon to the highlands of Mesa Verde, to the Mongollon Rim; to a contemporary Zuni community where tribal elders maintain silence about the fate of their Lost Others; and to the largely unexplored foothills of the Sierra Madre in Mexico, where abundant remnants of Anasazi culture lie yet to be uncovered.

What listeners say about House of Rain

This is not a serious book about ancient culture in the Southwest, which is what I expected. Big disappointment, couldn’t finish it. If you’ve never been to any of these sights and don’t mind overly flowery prose, you might enjoy.

I am admittedly an ancient sites junkie and have been to a number of the sites which the author reviews and many many others I will never see. He puts everything into perspective and tells a winding story of how all these sites relate to each other, along the way showing how some long held myths do not hold up to scrutiny. Childs never loses that sense of wonder as if he is seeing each place anew. I absolutely loved this book; listened while I worked in my studio, in the car, before going to bed.

Fascinating information but a bit too much memoir

I started listening to this while on a road trip to visit Chaco canyon, and it was an excellent companion to my travels. Childs does a great job weaving together recent research on the ancestral Puebloan people who lived (and live) in the American southwest. It's a very good book overall & reminds me of the mindblowing history 1491, by Charles Mann. Unlike 1491, however, the history and information are frequently interrupted by literary memoir anecdotes about the author's own travels. I'm sure it's fine if you like that sort of thing, but I found myself skipping ahead frequently to return to the history & anthropology & archeology.

I'm sure that this book / story / history is incredible. It certainly "ticks all the boxes" for my interests: American history, folklore, archaeology, compelling first person storytelling...but, IMO, the author isn't a great reader. Additionally, the recording seems pretty poor. I'm not usually too sensitive to audio quality, but this one sounds like it was quickly recorded at home, with low fi gear.

I'll certainly seek out the print version of this book.

Strap on a pack, try to keep up as Craig Childs tracks the Ancient ones.

An evocative journey through time and space. The curiosity of the seeker and links between the landscape and its people are explored in a magnificent fashion. You are going to inspire more visits to the region. Kudos.

I have heard Craig Childs in person a number of times and know him to be a fascinating storyteller. Listening to him read House of Rain was like being with him on his extended, fascinating adventures. I will savor this experience for a long time.

This was very intriguing. It increases my interest in the people native to the southwest. The narration was good, but could take an occasional break from the dramatic tone. It is more like field notes than a story. I would like to hear more.

where the Anasazi "disappear" to

I listened to it twice in a row. Very good story and inquiry of where the Anasazi went when they "disappeared".

Not to my liking

Disappointed. Maybe because I watched the Amazon video "Chaco Canyon", I found this audio book inferior.