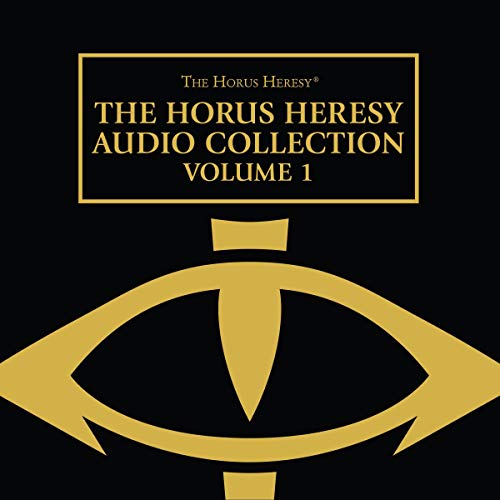 For the first time, get seven classic audio dramas from the Horus Heresy in one fantastic collection - including a brand-new audio drama edition of Dan Abnett's short story 'Little Horus'.

If you don't know where to start with Horus Heresy audio, this curated collection is the perfect beginning - and if you just want to reexperience these exciting adventures, this is your chance!

For more than 200 years, the armies of the Emperor of Mankind fought to reconquer the galaxy - led by the superhuman primarchs, the Space Marine Legions brought countless worlds back under the rule of ancient Terra. Now Horus, once honoured Warmaster and favoured son of the Emperor, has been corrupted by the whispered promises of Chaos. At his command the Imperium is torn apart by a terrible and bloody civil war, the likes of which the galaxy has never seen....

This audio drama anthology contains seven stories, detailing brutal wars - from the aftermath of the Isstvan V massacre to the horrors of the Shadow Crusade and even the doorstep of Terra itself - and bringing new insights into the heroes and villains of the Horus Heresy. It also includes a brand-new audio drama version of Dan Abnett's classic short story 'Little Horus', specially converted into a script and recorded for this collection.

Great first experience with the Horus heresy series, can't wait to listen to more. Some of the character dialogue needs to be turned up to match the volume of the main narrator though.

Having all these stories broight together and relased in this format is wonderful. I've wanted to get into the Horus Heresy for a while, and this was the perfect way to do it.

The production values are sky high, you're not just listening to someone reading a story. The music and sound effects are very well done and put you right there in the moment.

The performanes match the production in excellence, again adding to the immersion you feel as.you experience these stories.

This was so very well done! Each short story had me on the edge of my seat and sucked me right in.
My favorite was the small glimpse into Void combat in ‘Butchers Nails’. And getting info on what the Primarchs were doing and what they were like during the Horus Heresy. The cast was great all around! Hopefully there will be a Vol. 2

A smattering of imperium.

Some of my most favorite tales from the Horus Heresy great for longtime fans of the lore but might be over the heads of the uninitiated.

If Michael Bay did an audio book

The writing is solid, as you would expect from the authors listed. But the background audio production was so over the top as to be distracting.

excellent story but one story was too quite.

the stories were great. fighting described in great detail. one story was too quiet I had to turn the volume way up. not Good on a phone.

immersive, well read grouping of 7 different stories. You won't be disappointed getting this. Audio is excellent.

I love the audio books with sounds effects

The books with accompanying sound effects for the narrative are well done in this collection. Thank you all for the production.

Some of the stories are good, but I’d recommend sampling and buying each one separately, so that you don’t pay for ones you don’t like.

My first anthology book on the Horus Heresy series and I have to say I am not overly enthused by it, performances are good but the stories themselves are hit or miss for me

I normally don't like audio dramas bit my god this was amazing. the pacing and voice acting was outstanding!
only issue was rather than naming the stories they are just listed as chapter 1 2 etc

loved it, action, drama, descriptive and atmospheric. can't wait for volume 2, well worth it

Well dramatised stories. But hard to understand if you are unfamiliar with the 40K background.

Really enjoyed, back stories and information I never knew. Sound effects helped bring this book to life. Would recommend and will definitely listen to again.