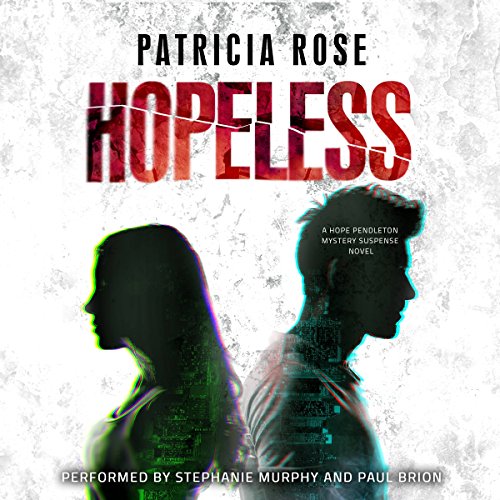 Hope Pendleton is a prude – a straight, by-the-book investigative reporter. Then her best friend, Callie, goes on a date and doesn't come back.

Gone. Totally off the grid.

The scene in Nashville, though, isn't just a bunch of consenting adults playing sex games. Before Hope realizes it, she has gone from investigative reporter … to bait.

What listeners say about Hopeless

The characters were strong and bold and I think that was a great combination for this story. Hope started off a skeptic of the BDSM lifestyle but she was ready to do whatever it took to find her missing friend. Eric was a man on a mission and showed right away that he would do anything he needed to get the job done. Together these two had chemistry and a mutual goal. The heat between them is a low simmer in the beginning and turns out to be boiling by the end. The sex scenes were good because they leave a lot to your imagination.

While it wasn't what I was expecting based on the genre it was listed under on Audible (Erotica - Fiction), it was exactly what I wanted it to be. I would say it's more Romantic Suspense because it's mainly about an investigation which takes place in the BDSM community. Erotica to me is the amount of sex & how detailed the sex scenes are. While this book has sex scenes, they are few, short and light on details. If you don't read erotica because you need more story and less sex, don't let the genre sway you, this might be just for you. It's worth the credit IMHO!

I really enjoyed Paul Brion & Stephanie Murphy's narration, they are both new to me but I will be looking for more book they have narrated.

There is so much to say about this book I’m not sure where to start. What I thought was going to be a story about friendship and experimentation quickly became something much darker a much more important to talk about. I commend Ms. Rose on taking on such a tragedy in our country and providing awareness of how it can happen. I live in a location where we are told the possibility is very high, but incidents of raids similar to that in the book are very infrequent. I would encourage readers to research how to identify the those that might be in danger so that we can stop these atrocities.

I’d also like to say that I appreciated the additional information provided by the author’s notes. I’m not one who typically reads the notes or pays that much attention when they are playing, but I would encourage anyone who reads this book, or even starts and decides its not for them to listen to Chapter 33 and keep it handy.

This book is so much more than just the story it provides, but it was certainly entertaining and a definite page turner. I wanted, no needed, to know what happened. It is certainly a story I will read again, because once you finish, you almost have to read it again.

This book not only left me with a book hangover, it also makes me want to take action. Great job!

I was provided with a free copy of this audio book for my honest review. The views expressed here are entirely my own.

Stephanie​ Murphy and Paul Brion do an excellent job with the narration! Each of them take on multiple characters and accents. Both of these narrators are new to me but I enjoyed both and plan to check out more of their work. Stephanie has a very seductive voice for her character and Paul's voice is very confident and commanding.

Patricia Rose is my favorite author! I was first introduced to her work in 2015 with her first book, Iron Mike. Another great book worth checking out! Patricia is one of only 2 authors I'd buy a book without even looking at the description! I love her work.

On a side note, I love Agent Todd Vogel! lol Seems like am awesome guy! Thank you Patricia!

The narration from both narrators was well done. I especially enjoyed Mr. Brion’s narration for his ability to grant different accents and keep them going throughout the entire story.

This was a seriously entertaining story. Both narrators were excellent. I don't really know what else to say, except wow! The story has the feel of an episode of Law and Order: SVU. Just a little uncomfortable, a lot mysterious, and very hopeless. I love how Hope grows as a person, and how Callie is such a free spirit. I would recommend this book to anyone who likes to be pushed, just a little, outside of their comfort zone. Well done.

I thoroughly enjoyed this book, P. Rose is a gift author, she created a great story here, a thrilling romantic suspense, with a side of BDSM, mystery along with some investigative elements too. The story grabbed my attention right from start and held it right to the end. The characters are complex and well developed. Hope Pendleton’s friend Callie enjoys her kink and alternative lifestyle, Hope is not into that lifestyle but when Callie goes out to play she is supposed to call Hope to let her know she is OK. When she misses her check in she knows something is not right when she finally gets in touch with her Callie drops her safe word to let her know something is wrong. Hope, an investigative reporter reports it immediately to the police. When an FBI agent reaches out to her she knows how much danger her friend is in, she teams up with him to get her friend back. Going undercover is not new to Hope but the world of BSDM is and it is way out of her comfort zone but she is willing to do it to save her friend. Eric has been working on this case and is close to getting all involved, he plays an alpha Dom and he is going to teach her ropes so she can join him and infiltrate an exclusive BDSM club, where he is a Dom. I loved how well plotted this book it, there is never a dull moment and the author keeps you thinking and on your toes all the way to the climatic ending. P. Rose thank you for this great story.

I listened to the Audible edition, Stephanie Murphy and Paul Brion are terrific narrators and voice artists. They bring the characters to life giving each their own voice and personality. They do a great job portraying the characters and projecting their emotions into their performance. They are entertaining storytellers and a pleasure to listen to. Thank you for this great listen🎧

Reviewed for AudioBook ObsessionHope and Eric come together by somewhat somewhat forced issues aka Hope’s stubborn need to know what has happened to her missing friend.
Eric is an FBI agent and Hope is a journalist. Hopes friend went missing after going to meet someone from the internet who like her was into the BDSM culture. Eric happens to be investigating a really sadistic person and would rather Hope or any other female be nowhere near this manor his cohorts, but she is so determined he would rather know where she is so he can protect her than be clueless to where she is.
The odd couple start to investigate together and their relationship becomes more than just business the deeper and longer they go.
Will they find the friend in time? What secrets will they uncover?
Really well developed characters and plot. Good twists and turns i enjoyed the story and narration

Great audiobook and fantastic narration.
This is a different kind of story and I really appreciated that. It’s written well with lots of emotion. Narration makes the story that much better for the performance. Nicely done and well worth the listen!

A book that is full of suspense

This is not my usual genre but it had me hooked from the start my only peeve was the way the main male lead treated the female but as it fit in with the theme of the story I suppose it’s to be expected.
Stephanie Murphy and Paul Brion do an excellent job narrating.

Hopeless was my first book penned by Patricia Rose. I liked the concept of the story, it was well thought out and suspenseful. I liked the writing style. I'm not sure I fully liked the H though. I didn't like how Eric treated Hope. For the bigger part of the story he didn't think about her as a person but rather an object, merely a means to an end. His character was flawed and not somebody I'd call a perfect dom, but I warmed up to him by the end. Hope was infinitely brave and willing to sacrifice everything for her friend. Even teaming up with an infuriating agent who seemingly found joy in constantly keeping her on her toes while riding on his high horse.
This book was definitely one of those where I'd have loved an epilogue, looking a few months or years in the future. The author's note at the end was thought-provoking.

The narration was very good. Both narrators did a very good job. Their performance was absolutely enjoyable. I liked how both Stephanie Murphy and Paul Brion portrayed the different characters.
The quality of the recording could have been a tad better. I'm using earphones and a bit of static was audible throughout.