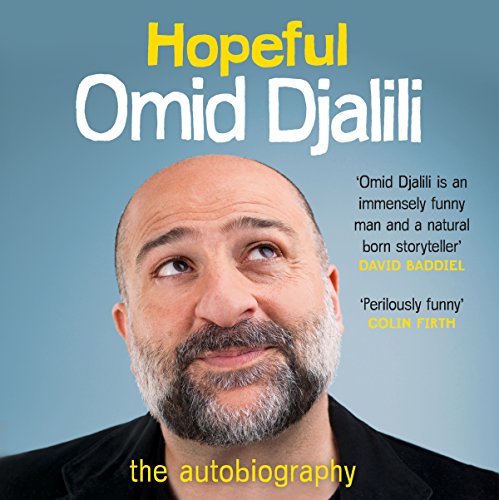 Omid Djalili's fascinating story begins with an unconventional childhood spent at his family's London guesthouse for visiting Iranians. At school he is kept busy with the beginnings of a passionate love affair with football but he hopes one day to live a more intellectually fulfilled life. For one wonderful summer in California it seems that maybe he will find his spiritual home at UCLA. Sadly his exam results don't quite hit the mark (it's difficult to study astrophysics at one of the world's top universities without O-level maths) and so, ever hopeful, Omid returns home to spend the next three years sitting his A-levels again, and again, and again.

Eventually, in a moment of madness, he concludes that the best way to achieve the desired A-level results is to 'improve' his certificates. Travelling to the university of Ulster he finds true connection and relaxing solitude despite the backdrop of Northern Ireland at the height of the Troubles and nearly being killed by paramilitaries. Here he decides that a life in show business is the only secure option he has left, and what follows is a hilarious and captivating insight into the life of a young performer who embraces his cultural identity, works harder than anyone else, and doesn't give up until he has hung out with Brad Pitt in Morocco, injured himself severely while showing off in front of Kate Winslet, and shared an 'intimate moment' with Oliver Reed in Gladiator.

Full of the warmth and intelligence that makes Omid such a successful comedian and sought-after actor, this memoir takes us on a joyously vivid journey through an unusually British life.

What listeners say about Hopeful

What a roller coaster inspiring life

I enjoyed, laughed and got emotional almost all the way throughout the book. Absolutely recommend

This book exceeded my expectations. I purchased it thinking it might be a light comedy about his life an a second-generation Persian immigrant, however i got much more.

Would you listen to Hopeful again? Why?

Yes, most certainly. Omid Djalili spins a tale like no other. Down to Earth, an hint of crazy, lots of humor and of course, honesty. One listening will not be enough.

The choice of Omid doing the narration is a true gem of a decision. I have admired this man's humor for many years and no one but him could do himself justice. You can picture Omid in the Studio having fun narrating this book.

Have you listened to any of Omid Djalili’s other performances before? How does this one compare?

I have his other two books and enjoy them immensely.

I have to say, in today's age there are jokes that would be considered wrong if said by any other person but Omid somehow gets away with it and makes us laugh doing it.

I find Omid a great comedian, I adore everything he does. He is able to, in this day of (as I see it) too much political correctness say what he does in a manner we just love, yet potentially said by others could be seen as racist, derogatory and offensive. Somehow Omid gets away with it - to our enjoyment. An honest comedian.

Well done Omid a fine book, a fine narration. And made a few travels on Public Transportation a lot more fun for me.

I am also British-Iranian (English mother & Persian father). So Omid's autobiography has some relevance. His performance reading this book is very good and amusing, who could have done it better ? I have also seen him live at the Eventim Apollo in Hammersmith; he was very funny. My only criticism is that he could have written more about his comedy act and career. Recommended.

I thoroughly enjoyed this audiobook! I would recommend it, highly and as a fan, it did not disappoint.

Brilliantly narrated, fascinating story of his life, with hilarious stories mixed with some very heartfelt and moving moments too. Highly recommended.

An amazing and weirdly relatable story. you have lived life Omid, thank you for sharing it with us 🙏🏾

Good laugh by an interesting guy

Loads of funny content and a good story of how to overcome rejection. 7/10 for me.

Not as funny as I hoped

I’ve listened to other comedian/actor autobiographies and found them much more engaging and amusing (ie Stephen Fry, Kevin Hart, Kevin Bridges) - the book is well written and well read, but missed really funny stories to make you laugh out loud

A highly entertaining listen- definitely a repeat listening book! Would highly recommend buying this one!

Very honest and down to earth.

Really enjoyed this audiobook. An interesting character. And nice he was telling his own story.

From beginning to the end I was captivated by this very funny, interesting and just a bloody nice bloke!

Beautiful read but a bit all over the place

Read with integrity, humour and pace it was an enjoyable listen. The story though felt like it jumped around too much.