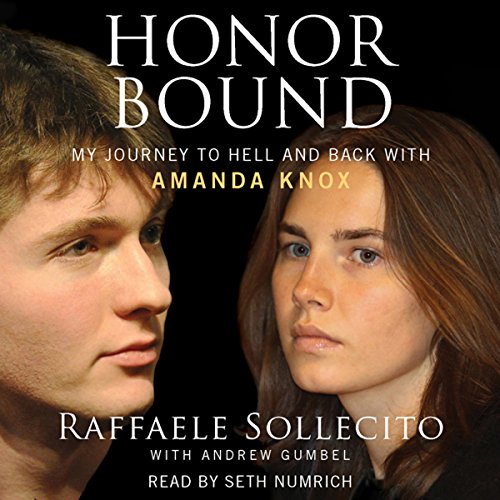 A gripping memoir from Amanda Knox's Italian ex-boyfriend, Raffaele Sollecito, chronicling his relationship with Amanda and the four years they spent in an Italian prison for a crime they did not commit. Sollecito was a computer-science student at the University of Perugia when he and Amanda Knox were first accused of murder in 2007. On October 3, 2011, after four years of trials and appeals, he and Knox were cleared and released.

What listeners say about Honor Bound

If you could sum up Honor Bound in three words, what would they be?

I thought I was pretty well versed on this case before I read this book but I was still surprised by a few facts in this memoir.

Giulia Bongiorno maybe my new personal hero. Judge Hellman is up there also.

This was my first audiobook read by Seth Numrich and I enjoyed his pace and voice, I would listen to him again.

I think the title of the book says it all - Honor bound.

Fast paced and straight forward. It was compelling to see Raphaelle's point of view, largely viewed as merely pawn in this tragic series of events; he is brutally honest and doesn't always paint himself in the best light but is unwavering in his pursuit to do the right thing. All for a girl he had known for barely more than a week.

This book also details the immense cost this trial took on his family which was touching, I particularly felt for his sister. Their father should be proud of having raised such upstanding children.

I was always amazed at how easily he could have chosen to save or at least help himself but stuck to the truth. He possesses qualities that are increasingly rare in this day and age.

I really enjoyed all aspects of this book.

Where does Honor Bound rank among all the audiobooks you’ve listened to so far?

If you were interested in this case, you will enjoy this book

What was one of the most memorable moments of Honor Bound?

We all heard about this case. Now I feel like I know what really happened.

My heart hurt for everyone involved. There are no winners.

Narration was excellent, good pacing. This was a quick listen for me and definitely kept my attention throughout. I listened to this after listening to "Waiting To Be Heard by Amanda Knox" to get a greater perspective. Heart-wrenching ordeal for all involved, esp. Meredith and her family. There are no winners here. Amanda and Raffaelle went thru a horrific experience that lasted four long years after finally being proven to be innocent, released, and then fully exonerated by the Italian Supreme Court. Raffaelle lays out exactly the reasons why they were found innocent of the murder on appeal. This is also a cautionary tale for any American traveling overseas, be aware of your rights if being questioned by the police and always obtain legal advice.

Raffaele is a good man

great book. he stuck by Amanda and never threw her under the bus. amazing story.

What did you love best about Honor Bound?

After listening to Amanda's "Waiting to be heard", I was eager to hear Raffaele's side of the story. The media painted terrible profiles of them both. After listening to both, similar versions of the story, I choose to believe in their innocence and am dismayed by the Italian judicial system. I hope the ruling on acquittal stands as they have both been through so much. My heart aches for Meredith's family and hope that Rudy's guilt and sentencing will begin their healing process.

What made the experience of listening to Honor Bound the most enjoyable?

I think the fact that his story backs up everything Amanda said- getting his perspective was enlightening.

The fact that no matter what, he would not sell Amanda out.

No- I have not heard Seth Numrich before.

I think the verdict that set them free- it was quite emotional.

Yes! This put to clarity every question I had after listening to Amanda Knox' book.

The complete consistency with which Sollecito's story and Amanda Knox story of the events parallel.

What does Seth Numrich bring to the story that you wouldn’t experience if you just read the book?

Yes, I wish I could have.

A riveting read of an astoundingly horrific plight

Where does Honor Bound rank among all the audiobooks you’ve listened to so far?

Honor Bound is very definitely ranked up there as one of the most riveting, well written and emotional accounts I have ever heard. It is the top of my list for both style and presentation.

I take the time to carefully select the non-fiction text in which to fill my personal down time - this is such an emotional account of such a shocking ordeal that all I can say is thank you Raffaele for your bravery in sharing it with those who care to listen.

Seth Numrich's reading of the book was highly commendable, with a solid pace, clear diction and outstanding emotional balance which came across so well that I had to remind myself that this was not Raffaelle himself speaking to me in person. Extremely well done.

It was all so moving that it would be extremely hard to select one particular moment.

Raffaele Explains His Side

Would you listen to Honor Bound again? Why?

It was extremely nice to get more Raffaele, than Amanda. He explains his thoughts, fears and frustrations all the way through.

How much his family went through while he was in prison.

If you're at all interested in the Amanda Knox case this book is for you. Sollecito recounts his time in prison along with before and after the indictment.