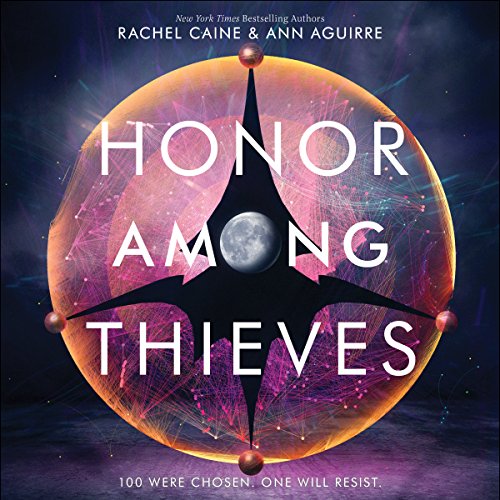 Meet your new favorite kickass heroine in this daring YA series by New York Times best-selling authors Rachel Caine and Ann Aguirre, a thrilling yet romantic futuristic adventure perfect for fans of Claudia Gray's A Thousand Pieces of You.

Petty criminal Zara Cole has a painful past that's made her stronger than most, which is why she chose life in New Detroit instead of moving with her family to Mars. In her eyes, living inside a dome isn't much better than a prison cell.

Still, when Zara commits a crime that has her running scared, jail might be exactly where she's headed. Instead Zara is recruited into the Honors, an elite team of humans selected by the Leviathan - a race of sentient alien ships - to explore the outer reaches of the universe as their passengers.

Zara seizes the chance to flee Earth's dangers, but when she meets Nadim, the alien ship she's assigned, Zara starts to feel at home for the first time. But nothing could have prepared her for the dark, ominous truths that lurk behind the alluring glitter of starlight.

What listeners say about Honor Among Thieves

Where does Honor Among Thieves rank among all the audiobooks you’ve listened to so far?

This was probably one of my favorite audiobooks to listen to.

The characters were all well developed and rich, and Rachel Caine makes you understand even the more antagonistic characters and their motives. It was a delight to journey along with Zara and watch her grow, as well as to watch her struggle when her rather prickly personality clashed with the world she is thrown into.

What about Adenrele Ojo and Adam Lazarre-White ’s performance did you like?

I'm very picky about audiobooks, to be honest. If the narration isn't great, it throws me out of a story so quickly. This story had a wonderful reader, though, and she had me drawn in every second. She really put life into the characters in a way that made it a real joy to listen to.

Honor Among Thieves by Rachel Caine

Was not sure how this book would be, was good. Not one for bad language, that's me. The author writes in a way that makes you feel as though your there. Thank-you.

Loved the story hated the language.

The characters were amazing and so was the story. The world building interesting and believable. I just couldn't stand the constant bombardment of swear words. I don't know anyone who speaks like that and it was very distasteful to me. There are other ways to show someone is strong and willful without beating the reader up with cuss words. Sadly I will never know what happens to these great characters and how it all ends.

Took awhile to be drawn into the story.

The first chapter was a bit too abrupt. It put me in the middle of a scene without any background information. Not knowing what was going on, I almost skipped listening to this book. However, after the first couple of chapters, I was thoroughly drawn in and couldn't put the book down.

The Story drug on way too long and that made it difficult to get through. Also it was challenging to follow. The ending was uneventful in my opinion, it was long awaited in then.... The good side to the book is the beauty and the appreciation of nature and native American culture.

Very enjoyable and a nicely different

I have to say I am a long time fan of Rachel Caine - from way back and the Weatherwarden series and the Morganville vampire series . Sooo I had high hopes for this new series . I was not disappointed. It’s a good idea to have a species of leviathan who live in space and who travel with selected humans . Finished this and gone straight into the next - what bigger praise !