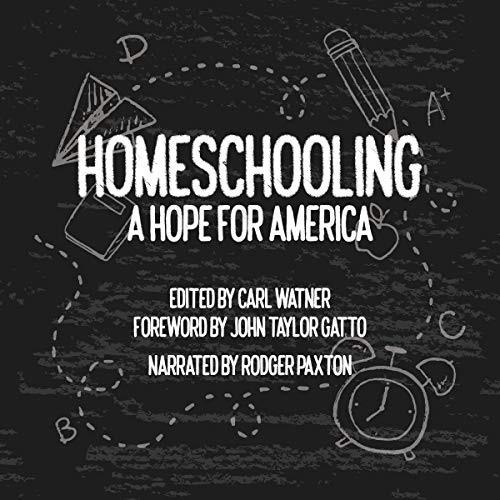 Homeschooling: A Hope for America is a collection of articles taken from The Voluntaryist, a newsletter with a libertarian outlook which has been published since 1982. The anthology has been assembled by Carl Watner (from many of his past articles, as well as those of others), and contains an original foreword by John Taylor Gatto. This anthology argues against government education in a unique way. One who advocates voluntaryism opposes government schools, not because he opposes schooling but, because he opposes coercion, which is to be found in government taxation, compulsory attendance laws, and in the monopolization of public services. Most of us would agree that there should not be any state religion; that religion should not be supported by taxation; and that people should not be compelled to attend religious services. Why shouldn’t the principles of voluntaryism in religion apply to education?

All government depends on the cooperation and/or tacit consent of the majority of its citizens. When the state could no longer use government churches to legitimize its rule of the divine right of kings, some other institution had to be found that would induce consent among the masses. Government schools became the chosen instrument to produce good citizens for the state. Indoctrinate the young: then they will support the state for the rest of their lives.

America is at a cross roads of cultural and economic disintegration, yet voluntaryists believe that there is hope. It is to be found in home schooling. Rather than cursing the darkness, parents can light one small candle of wisdom and learning and pass it along to the next generation. “Ages of experience testify that the only way society can be improved is by the individualist method; … that is, the method of each one doing his best to improve one.” This is the quiet or patient way of changing society because it concentrates upon bettering the character of men and women as individuals. As the individual units change, the improvement in society will take care of itself. In other words, if one takes care of the means, the end will take care of itself.

What listeners say about Homeschooling

The Book That Made Me An Anarchist

A great primer for home educators, voluntaryists and american parents. It's hard to overstate the issues covered in this book. It's entertaining, challenging, encouraging and deeply moving. Through essays, articles, and letters we see the touchstones of education throughout our nation's history and discover how and why it has become the way it is. This book is an encouraging charge to parents --all parents-- to take their part in ther growth of freedom.

Because it is a collection of articles, it feels a little disjointed, but it is filled with vital insights about the 'why' of homeschooling that you won't find anywhere else. It's an important supplement to the struggle of preventing the further indoctrination of our children.

Great story with some amazing narration. Really interesting pieces about the Amish, too. Well done!