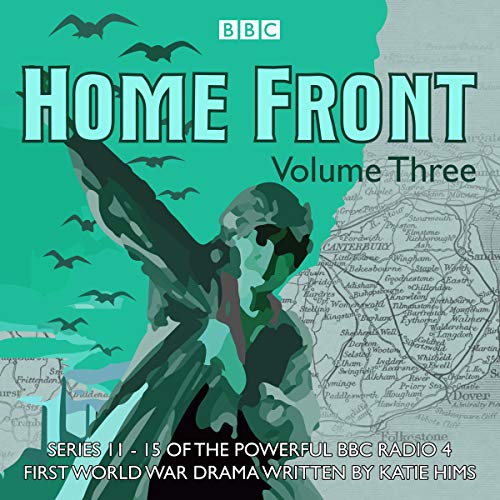 First heard on radio between 4 August 2014 and 9 November 2018, each episode of Home Front is set exactly 100 years before the broadcast date, and each follows one character’s day. Together they create a mosaic of experience from a wide cross section of society, mixing historical fact with enthralling fiction to explore how ordinary people coped with daily life in wartime Britain.

Back in Folkestone, the residents are dealing with the aftereffects of a devastating air raid. Howard Argent is kept busy at the Bevan while Ulysses Pilchard experiments with electroshock therapy. Meanwhile, women’s suffrage, prostitution and unmarried mothers are hot topics, and Kitty Lumley experiences the sharp end of intolerance.

In Tyneside, ripples from the 1917 Bolshevik Revolution lead to a rise in union activity, and the factory faces the threat of strike action from the munitionettes.

And in Devon, women, children and prisoners of war are being put to work on the land. With Britain on the brink of starvation, summer 1918’s harvest is crucial - but conscientious objectors, unwilling or unable to help, arouse fury.

As the Great War moves towards its end, can the wounded communities back home find some sort of peace, however fragile?

Tackling themes including trauma and madness, industrial unrest, morality and sexuality, surrogate labour and the outbreak of peace are some of radio’s foremost dramatists including Katie Hims, Shaun McKenna and Sarah Daniels. Among the extensive cast are Helen Schlesinger, Kathryn Beaumont, Roy Hudd and Billy Kennedy, with guest appearances from Geoffrey Palmer and Mark Heap. Also included is 'Home Front: A Fragile Peace', a special 75-minute episode which flashes forward to explore the lives of the characters on 10 November 1919.

I missed this when on radio 4 but was interested enough to buy the three volumes. And I must admit I learnt a lot - things I never knew about WW1. They mention conscientious objectors but no mention of those Shot at Dawn for their beliefs. The role women played was bigger than I was aware and I enjoyed seeing life in 3 different environments Folkestone, tynemouth and Devon. From those in service, working class, middle class and gentry.

Would recommend that children listen to this as part of history lessons. And adults alike on how much devastation was caused by the War.

Brilliant casting - well known names. My only bone of contention was actors changing between volumes but given this was delivered over 4 years to commemorate the duration of the war - you can understand that actors were no longer available. But the majority of the characters stayed the same so was easy to follow their stories. At times sad, funny and tear jerking.

I lived with the whole series, all three volumes for nearly 4 months, and I have loved every moment. I was devastated when it ended towards the end of my commute. Like the Archers I had grown to love and loathe the characters, and I mostly was gripped by the stories.

There is one negative, the obsession the writers appeared to have with gay issues, to a point where it threatened the whole integrity of the series. I am not homophobic, and of course, there were gay affairs in WW1. However, there so many in this, it was obvious the writers were looking at this from a 21st-century perspective. It is highly unlikely the real people would have got away, as lightly as the characters did.

That aside, the whole series does inform and the events are mostly historically accurate. One example is the sinking of The Onward, which did happen, and was salvaged ( to work as an IOM ferry, and become the first civilian ship to return soldiers on at Dunkirk) was raised using 5 locomotives, but not until 1920.

The last episode was radio at its best, all stories resolved and an insight into the future. Well done to all concerned.

An amazing production filled with characters each with their own distinctive story, their struggles and triumphs. I laughed and cried with them as I listened for many, many hours. (I have listened to all three volumes).
Now their war is over, but this memorable listening experience will stay with me for some time.

I would highly recommend if you enjoy radio dramas. I've listened to the whole series and thoroughly enjoyed every minute. The sadness and loss caused by war made me realise how lucky we are today and that we should appreciate the times we live in and not take life for granted.