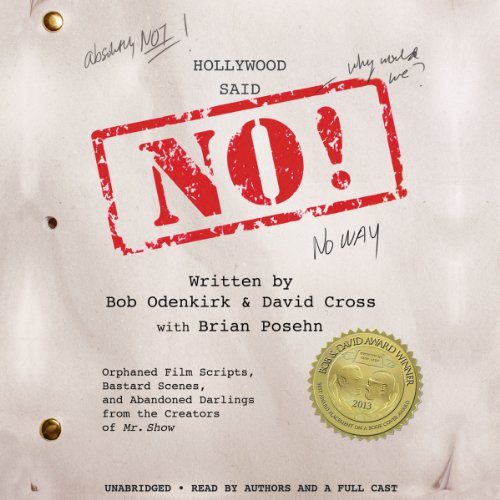 Since Mr. Show closed up shop, Bob and David have kept busy with many projects - acting in fun, successful, movies and TV shows, directing things, and complaining about stuff that didn't turn out well to anyone who would listen, and even alone, in silence, inside their own heads.

Hollywood Said No! reveals the full-length, never-before-seen scripts for Bob and David Make a Movie (fleshed out with brand-new storyboards by acclaimed artist Mike Mitchell) and Hooray For America!: a satirical power-house indictment of all that you hold dear.

This tome also includes a bonus section of orphaned sketch ideas from the Mr. Show days and beyond, suitable for performance by church groups that aren't all koo-koo about religion. What you are looking at online, and are about to buy, is chock-full of comic twists, turns, and maybe a few hard truths. We said "maybe," but what we mean was "probably not."

Now, for the first time, take a peek at the scripts that didn't get the go-ahead and ponder a world we can only dream about...and beyond!

What listeners say about Hollywood Said No!

It's Bob and Dave in Mr Show mode, it's great

I figured I'd add in a good review since most of these reviews are pretty awful and worthless.

The idea of this book is that it's a couple of movie scripts that were never made and then some short skits, that's it - it's not Mr Show, it's nothing behind the scenes, but it's extremely entertaining if you liked Mr Show.

This is absolutely a book that is best in audio format as the audio is fully produced with much of the Mr Show cast, they have sound effects and music - if you've seen enough Mr Show you can easily visualize what is happening in the scenes and they do a really good job of setting scenes and such. The book starts off with two movie scripts in a row which take up roughly 3 hours and 10 mins or so, which is awesome since they're like fully movies, just in audio format. After that you get some new short skits to fill out the rest of the book.

Overall this is an easy recommendation if you just pay attention to what you're getting. If you like Mr Show and you want more of that in a longer form factor and you have the ability to visual things, then you should very much enjoy this.

The voice acting and production is top notch.

What made the experience of listening to Hollywood Said No! the most enjoyable?

This book of scripts and sketches is not read, it's acted. Music, Sound effects, occasional bouts of laughter and ad-libs bring an extra dimension to what is on the written page, and in some cases, enhances our understanding of what the printed page can only hint at. You know these people care... giving their fans extra effort, extra audio layers, and making this "reading" an incomparable event.

There are too many to list, although David as the "President" of the United States is a real standout.

During the performance of the first script, narrator Paul F. Tompkins suddenly disappears and is replaced... the clumsy explanation of this brings laughter from the actors and this listener.

I listened to this in two "sittings"... driving. But only because I had to get out of the car.

This Audible edition is well worth it, even if you bought the print edition already. It's like a new episode of Mr. Show, with much of the same cast (in addition to Bob and David, I mean). Highly recommended. I only gave the "story" 4 stars because this book is made up of course of scripts Hollywood rejected. I mean, Hollywood knows what it's doing, right?

For all you Mr. Show Lovers

The audiobook is so good you won’t want to throw yourself into a vat of acid.

The cast knows their craft and are passionate, and I am a fan of their comedic style. It is a fun short listen but I did not laugh out loud. What I enjoyed most was gleaning how a movie script is written differently than a novel.

What made the experience of listening to Hollywood Said No! the most enjoyable?

The comedians who read the book and the funny stories.

The originality and free-form silliness.

Their rapport and obvious comfort with the material (since they wrote it).

Mistakes of the Ancestors

What did you love best about Hollywood Said No!?

I understand why these were not made into movies but that just makes the whole thing more ridiculous.

the cast are witty as ever, but they left the some of their crackups in the final recording, which i thought was funny.

Funny the whole way through!!! Like an extended Mr. show episode. Wish I could hang out with these guys!

Laugh out Loud, For Real!

Would you consider the audio edition of Hollywood Said No! to be better than the print version?

I didn't read the print version, but I can't imagine it would be better when you have the actual authors and their friends reading the book.

Bob is so sensible but David spouts the craziest shit! I wonder if they come up with each others jokes and swap...

What does David Cross and Bob Odenkirk bring to the story that you wouldn’t experience if you just read the book?

They're intentional inflection. Humor is found in the words and the sounds.

I laughed out loud on the bus so many times that I stopped caring if people looked at me!

You get a window into a screenplay reading. Is that really how those things go down? I hope so 'cause that shits fun! And Funny!

I'm a fan of Mr. Show, but I enjoyed this way more than I thought I would. It's a funny and fun experience and I will listen to it again. I thought the first script was perfect, but I can see why it was unproduced. It kinda reminded me of the Kids in the Hall movie "Brain Candy," which is also a solid work of satire that didn't and doesn't get the recognition it deserves.

Hey everybody, it's Bob and David!

If you could sum up Hollywood Said No! in three words, what would they be?

"Old Gregg" - because he has a mangina and "all things good"

Have you listened to any of David Cross and Bob Odenkirk ’s other performances before? How does this one compare?

its not a book and yes I wet myself

For fans of Mr Show

What did you like most about Hollywood Said No!?

That it was fully formed, it seemed effortless despite the fact the script was at the time over a decade old.

Bob yelling is up there with the best catchphrases.

It's always great to hear from Jay Johnston

I nearly choked a few times due to laughter.