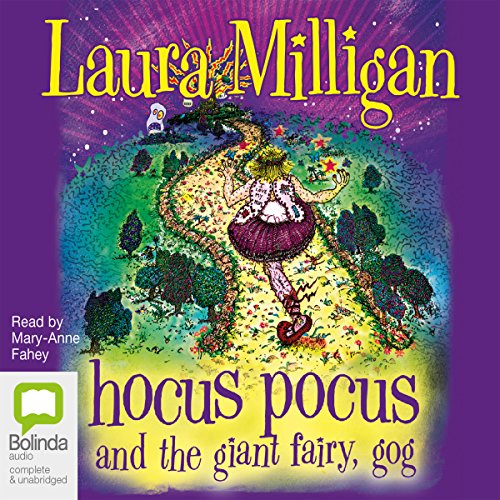 Laura Milligan brings us this delightful sequel to Hocus Pocus Versus the Stinky Pong. Gog the Giant needs some help from his friends the Wizzles to achieve his dream of becoming fairy. Milligan's stories are as funny as they are adorable. Besides, they never avoid a good fart joke. Mary-Anne Fahey brings excitement and wonder to this fanciful tale. She breathes life into Milligan's imaginative characters, giving them funny voices that will surely elicit giggles. Meanwhile, her easy pacing and expert enunciation is perfect for those little listeners.

Gog the Giant wants to be a fairy. It seems unlikely that he will ever pass the fairy test, however, so Wizzles - Lucy and Joe - set about training him for the big day. If he passes, Giant Gog will be able to fly to the tail end of Hocus Pocus to rescue his father from the evil clutches of Witch Jellypoo, who wants to melt Gog's father's golden bottom off and become rich.

With shades of Roald Dahl and Enid Blyton, Hocus Pocus and the Giant Fairy, Gog will delight young readers with its humour and creativity. This book is the sequel to the popular Hocus Pocus Versus the Stinky Pong.

What listeners say about Hocus Pocus and the Giant Fairy, Gog