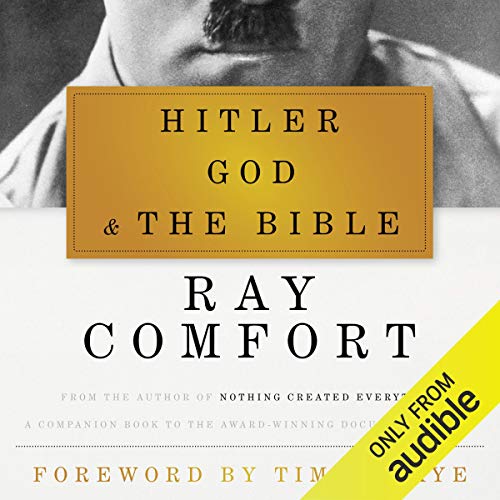 Hitler, God, and the Bible

Hitler, God, and the Bible

In Hitler, God, and the Bible, international evangelist and bestselling author Ray Comfort exposes Adolf Hitler's theology and abuse of religion as a means to seize political power and ultimately instigate World War II and genocide.

This fascinating study mines the depths of Hitler's beliefs and convincingly argues that without Hitler's misuse of Christianity the Third Reich would not have had its legendary rise, resulting in the deaths of more than six million Jews.

Highlighting Hitler's youth, his influences, and his path to seducing a nation, Hitler, God, and the Bible is a fresh, stinging reminder of the power of the cross and how its misuse led to the Final Solution.

Ray really sorted things out politically and Biblically without any aggression towards Hitler and his regime.

Ray Comfort is a master at what he does.

i thoroughly enjoyed this book and could not agree more with the parallels to abortion.

I was expecting a book about Hitler and his theology, which it was. But I was not expecting the sneak attack on the topic of abortion. Maybe I should have read the book description a little better.

Not exactly what I thought it would be

The book was an informative look into Hitlers rise to power, but it was not the parallel of hitlers religious views or lack there of that I was expecting. There was maybe a chapter in it that related to the title but that was about it.

It is a very interesting historical book.

It makes you think and it says you many interesting things about Hitler's personal and political life.

History must be taught and never forgotten

I love Ray Comfort for his work and love for God. I enjoyed this book as it gave me a better understanding of the evil behind the man, Hitler.

It disgusts me to know that so many people were fooled my this man and his evils.

I pray that others will read/listen to this book and always be reminded of the Holocaust and keep the innocent victim’s memories alive.

Worth reading two or three times.

Learn some things about Hitler and the 'Third Reich' that you may not have known before. And perhaps learn a few things about yourself, in the process. It will be well worth your time.

Very interesting and well put historical perspective. Comfort does a good job of relating and clarifying Hitler's view on Christianity. The only downfall was the performance of the reader. His "Hitler voice" was laughable and got a little annoying. Just my opinion. Overall, it was a great book and definitely worth a read!

A sterling example of audio greatness.

Would you listen to Hitler, God, and the Bible again? Why?

Yes. The story is compelling, documented through actual quotes of the historical participants.

It demolishes the caricatures that are prevalent today, revealing a textured life and the many influences that led him to his evil deeds.

What does Tom Parks bring to the story that you wouldn’t experience if you just read the book?

Specific voice characterization for each person. His "narrator" voice is totally distinguishable from his "Hitler" voice, and every other historical individual cited, whether it be Henry Ford, Charles Darwin, or other German Nazi officers.

The list of all the laws enacted in Germany to oppress the Jews. Amazing that the progression could go so far, so fast, ending in murder of millions.

I like this reader very much. Want to hear more of his readings.

Not what you think

Interesting history lesson, then classic christian preaching, then you get to what the book is actually about - anti abortion.
Better history books out there.