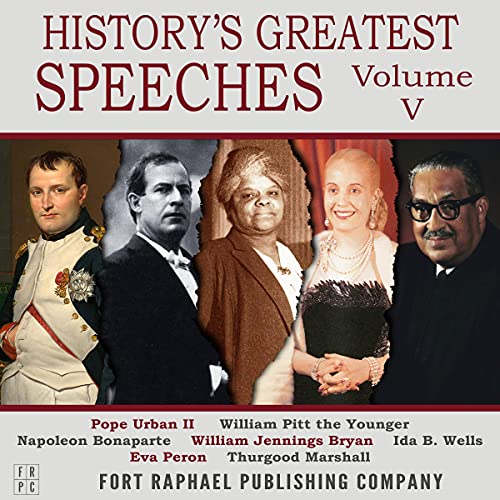 The most profound and important speeches ever delivered are here collected in this anthology, featuring some of the most influential figures in world history. From ancient times to the American Revolution to as recently as this past century, Fort Raphael Publishing has collected some of the most important and iconic speeches of all time and presented them in this series. Some of the finest narrators in the world have been tasked with bringing these phenomenal speeches to life and SoundCraft Audiobooks has crafted the recordings - using atmospherics and sound effects - to allow the listener to feel as if they might have present when the orations were first delivered.

Volume V features such disparate historical characters as Pope Urban II urging the beginning of the Crusades, Prime Minister of England William Pitt the Younger arguing against negotiations with Emperor Napoleon Bonaparte, the defeated Napoleon Bonaparte himself, bidding farewell to his Old Guard as he steps down as Emperor of France, William Jennings Bryan's fiery "Cross of Gold" speech, Ida B. Wells speaking on the scourge of lynching in America, Eva Peron stepping down as candidate for the Vice Presidency of Argentina and Thurgood Marshall delivering the closing argument in the landmark Supreme Court case of Brown v. Board of Education.

This collection of powerful and moving speeches pays tribute to these great world leaders and the words they used to inspire millions.

This is the fifth volume of this series.