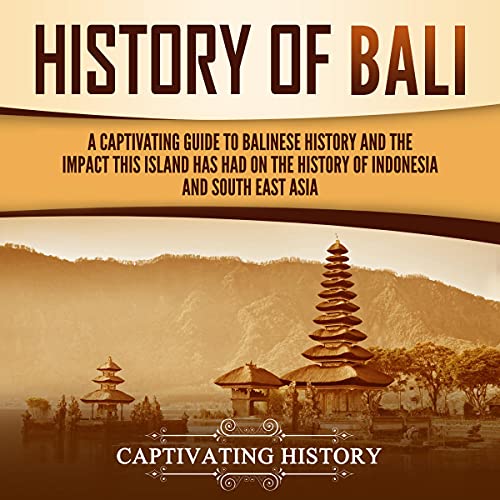 Discover the magic of the Indonesian island of Bali in this captivating book on its history, from the origins of Bali’s geological formation until modern times.

Bali is known as “the Island of the Gods”, with its tens of thousands of temples and shrines dating back more than a millennium to the exotic Indianized empires of Java that influenced Bali greatly. Although it bore witness to the ancient Maritime Silk Road of Southeast Asia, Bali mysteriously avoided complete domination by ocean traders and European colonizers until as late as the 20th century.

Bali is visited today by millions of international tourists, not only for its magnificent beaches and lush, tropical scenery but also as a living monument of an ancient cultural past. The Balinese of today adhere faithfully to the unique Balinese Hinduism of their island paradise and continue following traditions and art forms that were brought to its shores by their ancestors thousands of years ago.

In this audiobook, you will learn:

Buy this audiobook now to learn more about the history of Bali!

What listeners say about History of Bali

who knew that such a small island could have so much history. this was a very good book.

For a small country Bali has a rich history. Is there any where the Dutch did not try to take over. Fascinating how much has happened would love to visit there one day. Good read!