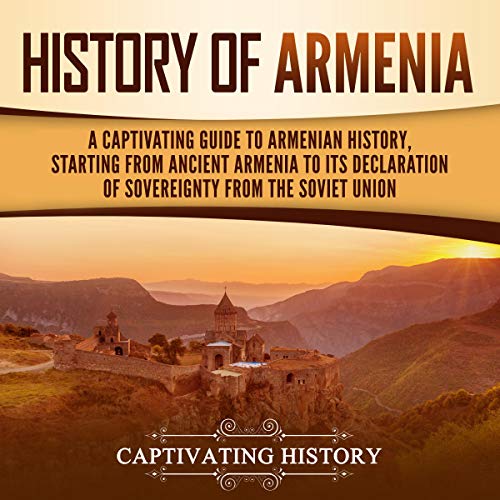 If you want to discover the captivating history of Armenia, then pay attention...

The tale of Armenia has its beginnings as a glorious ancient kingdom, one that commanded the respect of nations as mighty as Egypt and Babylonia. As its history takes a turn for the darker, each section reads like a roll call of the most famous of figures: Antony and Cleopatra, Alexander the Great, Genghis Khan, Frederick Barbarossa. Armenia saw ancient Rome rise to power; it knew Egyptian pharaohs, the Golden Horde, the Soviet Union, and saw the first invasion of the first Muslim army. For a long and ugly part of its history, Armenia struggled under the yokes of one empire after another: The Roman, Parthian, Persian, Byzantine, Timurid, Mongolian, and Ottoman Empires, to name just a few.

Yet through it all, Armenia, time and time again, emerged as a nation with a powerful identity, one that caused much grief over the years, but one that still remains a pillar of strength to its people in good times and in bad.

In History of Armenia: A Captivating Guide to Armenian History, Starting from Ancient Armenia to Its Declaration of Sovereignty from the Soviet Union, you will discover topics such as:

So if you want to learn more about the History of Armenia, get this audiobook now!

What listeners say about History of Armenia

I like the story very much the history comes alive with the retelling of all the famous people who are part of that history. I hope that you'll get this retelling of the history because it's is of the of the Mesopotamian culture which is very fascinating.

A well-written, entertaining history of Armenia.

I took a class in the Armenian language, but found the history of this nation so interesting. This book fleshes out the lessons learned.

Extremely well researched and well written. Much information about the Parthian empire which I did not know. Somehow Parthia seems to have slipped through the cracks in history books. This history of Armenis is heartbreaking.

It is a clear and concise narrative, it makes a lot easier to understand their pain, their strength, and their soul.

Armenia's history takes us back to prehistoric times described in biblical literature as the Garden of Eden and Archaeologists discovered evidence it was one of the few sites of human existence.

The book was exactly as described. The information contained in it is quite extensive. I recommend this book.

I like how this book keeps the VAST Armenian history simple and organized. Recommended to all.

This is a great book whether you are knowledgable about the culture or not. It is written as if there are short stories throughout. It keeps your attention and gives you a variety of information. I bought a couple as gifts to others and kept one for myself.

This is an excellent book for children as well as adults. It is divided into meaningful chapters and Avakian uses simple, easy to understand the vocabulary that is "immigrant-friendly." Let's preserve our culture!

This is an awesome book on Armenia. It's history and it's folk. It highlights many famous Armenians of note. It shows the artistry from the region as well. I highly recommend it. Thanks to this author and his contributors

Very interesting story, I had never heard about the Armenian like this before. How terribly painful. I would have like to have known what is actual history is.

Short, easy to understand, great value, and good listening. Adventure, survival, history, and morality all rolled into an entertaining tale.

What amazing content! I never felt like I should take a break from listening to this. I loved the insight and the confidence of the author’s personal journey through the eyes of a local.

Captivating History is a beauty and it has put a collection of data in 3 hrs and 38 mins listening that you will learn quite a bit from.

If you are fond of history then This will be a great listen about this ancient nation, listen to it and enjoy and say thanks to Captivating History.

I found it an excellent audible on the history of Armenia. Unquestionably recommended listening and understanding.

Before traveling to Armenia

It contains a great deal of relevant introductory information about Armenian culture, religion, literature, and history.

The audible provides important information about Armenia society, about faith, the World Wars, being grabbed between countries, the Cold War, and struggling for their independence that anyone who reads it will gravitate to.

Loved the insight and the intimacy

In this audible, each chapter presents interest to further research into the countries self-development. Throughout time Armenia has been caught in the middle with The Romans, The Mongols, European Christianity, and The Ottoman Empire. That has shaped it into the country that it is today.

If you are curious about learning about history and look Armenia has taken to become the country that it is today. This is audible to give you such insight.