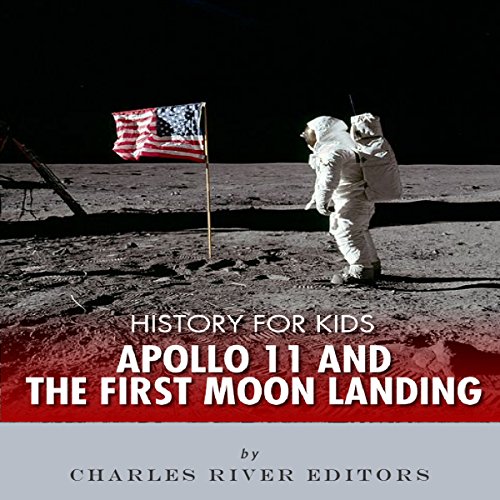 History for Kids: Apollo 11 and the First Moon Landing

At 9:32 a.m. on July 16, 1969, time stands still throughout the world, as thousands converge on the Kennedy Space Center and millions tune in on live television. At that instant, the first rumbles began to shake the ground as a small spacecraft attached to a giant Saturn V rocket several hundred feet tall starts to lift off. Quickly being propelled several thousand miles per hour, it takes just a few minutes to reach a speed of 15,000 miles per hour, and just a few more minutes to enter orbit at 18,000 miles per hour. Apollo 11 is on its way to a historic first landing on the Moon.

Apollo 11's trip to the Moon may have started on that day in 1969, but the journey began over a decade earlier as part of the space race between the United States and the Soviet Union. While landing on the Moon was a noble goal, proposed as early as 1961 by President Kennedy, NASA and the nation as a whole moved with urgency simply to best the Soviet Union, which had spent the 1950s beating America to important space-related firsts, including launching the first satellite and the first cosmonaut in orbit. In fact, President Eisenhower's administration began the design for the Apollo program in 1960 in hopes of getting a head start to the Moon. The plans originated a year before the first Russian cosmonaut, Yuri Gagarin, orbited the Earth and two years before John Glenn did.

Over the next decade, NASA would spend tens of billions on the Apollo missions, the most expensive peacetime program in American history to that point. Apollo 11 was only one of almost 20 Apollo missions.

What listeners say about History for Kids: Apollo 11 and the First Moon Landing