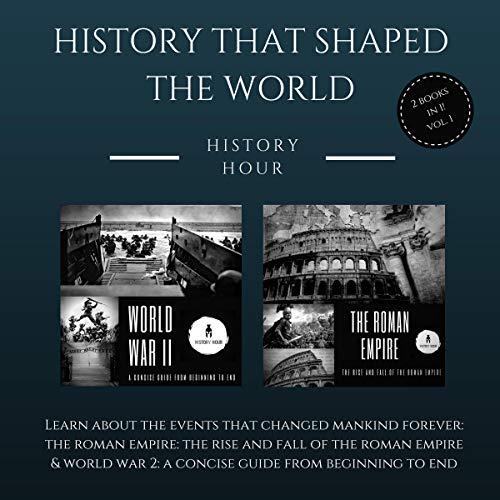 History That Shaped the World: 2 Books in 1, Volume 1

If you have an unquenchable thirst for history, then check out these two audiobooks. They describe two of the world’s most influential and devastating historical events that completely changed the course of mankind - the Roman Empire and World War II.

Although history is a fascinating subject, it’s often weighed down with lengthy explanations, minute details, and a tedious chronological timeline of events. Not these books. These books provide a brief history of these two important events without getting bogged down in all the facts. It saves you the time of wading through pages upon pages of history books - to discover you’ve forgotten the key points at the end.

If you’re looking for an overview that will give you an accurate and concise account of what happened during the Roman Empire and World War II, these audiobooks will give you exactly that. It breaks down history into manageable chunks so that you finish knowing the main events and how these impacted on the world at the time and since. History that Shaped the World contains two books: The Roman Empire: The Rise and Fall of the Roman Empire and World War 2: A Concise Guide from Beginning to End. At the end of these audiobooks, you will have a good understanding of what happened in these historic moments. It will give you a solid foundation of knowledge if you wish to pursue further research on the topic. In this collection of audiobooks, you will discover:

If you want to discover more about the world’s past and what happened before us to create the world that we live in today, then click the "buy" button to get started.

What listeners say about History That Shaped the World: 2 Books in 1, Volume 1