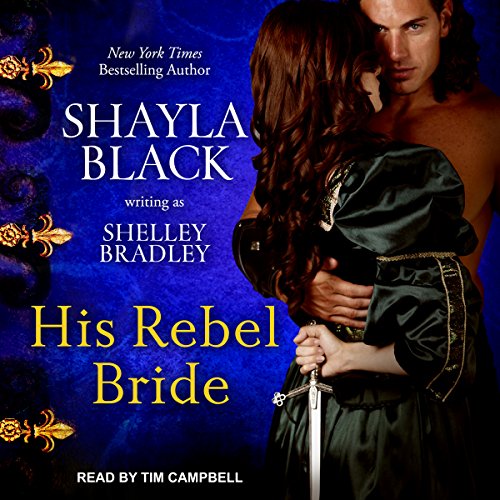 A reckless warrior, Kieran Broderick was half-Irish, yet bound to fight for the English crown. So when King Henry decreed that he take an Irish wife to quell rebellion there, he had little choice. Newly dubbed the earl of Kildare, Kieran travels to Langmore Castle, seat of the lawless O'Shea family, to choose a bride. When he picks Maeve, a fetching lass who seems sweetly submissive, he soon learns she's a fiery, clever woman. When she refuses to allow him into her bed or her heart, he finds himself fighting the most daunting battle of his life. But Kieran will never give up. He's determined to conquer his rebellious beauty - body and soul.

I listen to quite a few of these types of historical romance novels, and usually find them mildly entertaining. I like the History within the historical novels and this one was no exception. It does follow the usual format of these type of novels, but I enjoyed it just the same. Tim Campbell made listening to an ordinary romantic novel an extraordinary experience.
AUDIBLE 20 REVIEW SWEEPSTAKES ENTRY

What happened to his Irish accent?

I have enjoyed this series and was really looking forward to Keiren’s story. But I was so disappointed that his accent was now English. Tim Campbell did such a great job at his Irish accent through out the first two books. This now English accent took all the mischief out of his voice and character. He was almost too aloof sounding with such a formal English sound. Why change it?

Least Fave of the series

This book I feel was full of cliche. Please keep in mind that this may have been me. Every single time they mentioned their blood brother bond they held up their hand it killed me. Honestly I wanted to fast forward through toward another area. After 3 books back to back I'm tired of the Shakespeare speak. I also think that some other characters that the narrator portrayed were not as old as they sounded. I scored so high because I think I should've taken a break before listening to this book. I hope that you enjoy the book.

I new Kieran's story was going to be good and when he goes to Ireland and meets Maeve, well the battle begins. Tim Campbell was exceptional. I wonder if there will be more.

I found the time lines in this book unrealistic. It took too long for the two to hook up. Days would pass in between. Which led to weeks ... and at other times months. This was too unreal. The characters were weak when it came to relationship development.

I liked the story but the waits went on and on and on... at times I got tired of waiting.

The narration was perfect. Loved it.

I'm not sure if I recommend this book. This is the third book of the series. First is the best and this one is my least fav.

Kieran and Maeve's love story is one for the ages. I will admit, Maeve did annoy me a little bit. I just wanted her to love him lol.

Amazingly the writing gets worse from book to book. These sound like a 12 yrs old girl playing princess. And these women...in all three books...are NOT strong smart women who stand up, but whiny spoiled harridans who make me want to slap them all. Skip these. Even the so called sensual parts are poorly written. The fact that these men keep coming back to these horrible women makes me gag. Don't waste a credit.