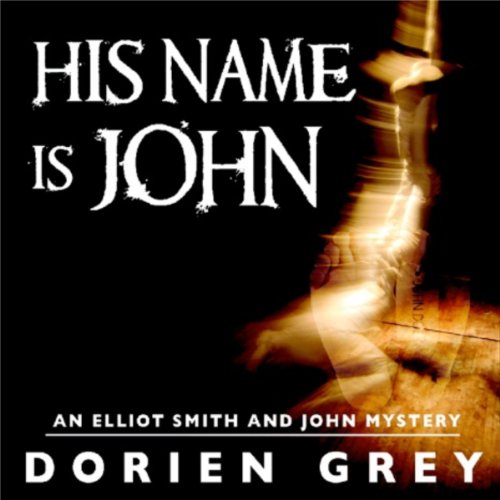 His Name Is John

Elliott Smith wakes up in the hospital with a head injury - and an invisible companion. At first, he's convinced "John" is just a figment of a damaged brain, but when he's fully recovered John is still around and desperate to find out who he is. Reluctantly, Elliott agrees to help, and discovers Chicago PD has a John Doe on their hands with six bullets in him - who died in the ER at the same time Elliott was there.

As Elliott digs deeper into the mystery of John, he stumbles on a body hidden behind a wall for 80 years, meets a sexy artist who could become more than just a one-night stand, and uncovers a deadly secret that has haunted a nun for two decades.

What listeners say about His Name Is John

I made it to chapter 3

The summary sounded ok, however the storyline was dull and boring, I was waiting to get hooked but nothing really was happening.

What could Dorien Grey have done to make this a more enjoyable book for you?

I liked the summary and thought it would be more enjoyable, but a long story just to get to the basics of the book was taking to long and I drive a truck so it was not like I was being distracted.

What character would you cut from His Name Is John?

I enjoy a good listen, but when I am turning the book off because listening to music would be more enjoyable, then it is time to delete.

Although a fairly easy mystery to figure out, this was non-the-less entertaining. I enjoy the author's writing style, the plot, and the characters. Elliot especially was my favorite along with Steve and Brad.

And, even though the performance was decent, I felt the voice sounded a bit too old for the characters who were around 38 years and younger.

Will Definitely Read the Series

Would you consider the audio edition of His Name Is John to be better than the print version?

I'm not sure that the audio edition could be considered a better experience. The narrator had a unique rhythm to his reading that was somewhat distracting at times. After 30 minutes or so I'd grown used to it and was able to follow the story. Honestly, I liked the story so much I will probably buy the print versions of the others just to finish the series!

I'm a sucker for ghost stories, but I also loved that the romance developed seamlessly without taking away from the plot of the mystery. Elliot and Steve didn't fall madly in love at first sight. Elliot questioned his sanity when he heard John's voice, who wouldn't?

Dorien Grey has a plays with language in a way that most writers only attempt and usually awkwardly. The remarkable descriptions of physical locations and the characters emotions will definitely have me buying another Eliot Smith mystery.

Would you listen to another book narrated by Jim Hickey?

I would not seek out a book narrated by Jim Hickey, but I would not avoid a book that he narrated either. I have listened to hundreds of audiobooks and there have been some that I have not finished because of the narration. That was definitely not the case here, but the rhythm was somewhat unusual.

I really enjoyed the way John's identity was slowly revealed not only to the reader, but also to John.


I listened to the audio version of His Name is John. I have to say that I really enjoyed the story a great deal and that I definitely look forward to reading the rest of the series! Not many people can use language as well as Dorien Grey and I found the characters engaging.

I loved the manner in which Elliot's relationship with Steve developed as it didn't take away from the focus of the story which was figuring out John's actual identity. My only issue was that the narrator took some getting used to. I have listened to hundreds of audiobooks and there have been some that I have not finished because of the narration. That was definitely not the case here, but the rhythm was somewhat unusual. Overall, I really enjoyed the experience and will listen to it again!

You made the point on chapter 2!

too much repetition; did not enjoy narration

story line was original and interesting

Would you be willing to try another one of Jim Hickey’s performances?

The written book would probably be more more interesting than the recorded version. I definitely did not enjoy the performance of the narrator, even though at times, he did well. I did not like the way he kept trying unsuccessfully to change his voice to reflect different characters.

I truly loved the story but was lost by the somewhat automated voice overs when it wasn't needed. Also the story being told through the the eyes of a 38 year old but the narrator resembles a grandfather reading to his young grandchildren. Although I loved the book, I probably will not purchase another book read by this narrator.

Good but not Great

Dorien Grey generally writes a good mystery (see Dick Hardesty series) but this first book has fallen short. Unlike his other series I figured out who, both ghost & killer, early on in the book and spent the rest of the time waiting for the writing to catch up to me.
I'm not real fond of Jim Hickey as the narrator, his style seems to be that of someone telling a story to a child, but the voice effects were good. So while I was put off, it was not enough to stop me from getting the next book in the series.
I am hoping that the next book won't be so transparent, and that they might decide on a different narrator in the future.

Was sadly let down

Would you try another book from Dorien Grey and/or Jim Hickey?

Who would you have cast as narrator instead of Jim Hickey?

If you could play editor, what scene or scenes would you have cut from His Name Is John?

I only got about an hour in, before I gave up. But the whole apartment scene when he just gets home from the hospital seems pointless.

This might have been able to be saved with a better narrator, because the voices he did were just ridiculous. But it was a horrible narration with what seemed like decent to sub-par writing, so there was no way I was wasting my time on this. Which makes me really sad, because I love these types of books.

What did you love best about His Name Is John?

Once again, Grey has created a colorful cast of characters we love and despise, beginning with the introduction of a middle-age Elliott Smith, a rather mild-mannered man whose vocation is real estate development in the Chicago area. Elliott and his rather motherly sister are siblings of wealthy parents who appear more interested in traveling the world and keeping up appearances than in spending time with their children and grandchildren.

Although he is from wealth and privilege, Elliott has achieved wealth of his own by investing in historical, architecturally significant buildings to rehab and sell for profit. A great backstory that provides a solid foundation for the novel that quickly bursts to the forefront when a decades old skeleton is discovered behind a brick wall in the basement of Elliott’s latest project.

Have you listened to any of Jim Hickey’s other performances before? How does this one compare?

No, but I certainly will listen to any Hickey narrates in the Elliott Smith series.

If you could take any character from His Name Is John out to dinner, who would it be and why?

Elliott Smith because he's a very interesting character and we share the same love for old architecture and desire to restore historical properties to their former glory - Elliott has the resources; I have the desire.

Dorien Grey has written an extraordinarily, inventive, highly imaginative mystery within a mystery, complete with well-developed characters and tightly plotted prose. The incredible talent of narrator, Jim Hickey, makes this already terrific novel an even more enjoyable listen. Those listening to the audio version of His Name Is John will quickly slip into a comfortable zone hearing Hickey’s words, the perfect choice of narrator for this novel, not to mention lending the right voice to Elliott Smith’s character.
I am looking forward to reading more Elliott Smith mysteries and hope Grey continues with Jim Hickey as narrator for future audio releases.

Would you listen to His Name Is John again? Why?

Yes, an interesting story approach, but characters need to be fleshed out more.

The evolution of John as an individual, almost like an infant learning to walk and talk.

Would you listen to another book narrated by Jim Hickey?

Probably, not a particularly dynamic reader but liked the way the audio was changed when addressing telephone calls.

The very end, when John's voice came across as his own rather than a conversation in Elliott's mind.

Normally, I do not care for explicit "sex scenes" in books; however, Elliot's relationship with Steve comes across very flat and not very believable. I think the book would have benefited greatly from more detail on the relationship.