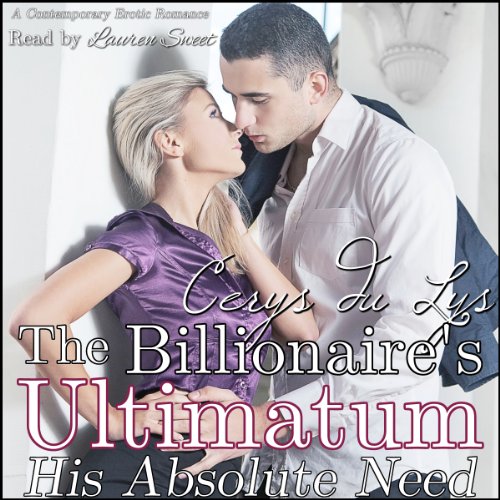 Falling in love wasn't part of Jessika's temporary job description. Nor, initially, was being asked by billionaire CEO Asher Landseer to become an egg donor and surrogate for his infertile wife. All Jessika wants to do is help, but is she setting herself up for heartbreak in the process?

Screwing up on her first day of a one-day job is the last thing Jessika Fevrier wanted to do. Worse yet, she's managed to infuriate Asher Landseer, the young, handsome, reclusive and eccentric billionaire CEO of Landseer Enterprises. His idea of work performance punishment is unorthodox to say the least, but Jessika finds herself intrigued by this singularly unaffected man nonetheless.

She was only supposed to clean Asher's office, but before she leaves for the day he has another job he'd like to offer her. Revealing that his wife is infertile, Asher asks her to consider becoming an egg donor for his family. He's always wanted children of his own, but the fates have plotted against him, it seems.

Asher's marriage is of necessity, rough and possibly loveless, but his desire for children is genuine and real. His absoluteness and certainty in himself and his surroundings, despite everything, captivates her. Jessika finds herself charmed by this dominant, enigmatic man who seems to know everything about business and nothing about love.

Behind the scenes, there's more than the fates plotting against him. Someone has it out for Landseer Enterprises, and they're going to do everything within their power to cause Asher's downfall. Between dealing with Asher's conditions and requirements, the cruel gaze of his spiteful wife, and corporate sabotage, Jessika finds herself lost in a world completely different from the one she's used to.

Can she rediscover herself and come to terms with her impossible feelings for a man she can't have? Or in her attempts to satisfy His Absolute Need will she inadvertently become the catalyst that leads to his (and her) ruin?

Dominant, sexy, and powerful. This tantalizing story of love, lust, intrigue and suspense will bind you, entwine you, and thrill you until the very end.

This audiobook is intended for mature audiences.

Narrator completely killed this for me.

What would have made His Absolute Need better?

What was most disappointing about Cerys du Lys’s story?

The narrator. I couldn't make it an hour through an almost 11 hour book because the narration was just horrible.

Who would you have cast as narrator instead of Lauren Sweet?

Can I have my money back?

What disappointed you about His Absolute Need?

What could Cerys du Lys have done to make this a more enjoyable book for you?

Make the story a bit more realistic - even minorly.

I'm not that hard to please. I've never given a one-star review before, so that's saying something.

From the initial "meet cute" when our heroine Jessica, a self employed book reviewer / blogger, clumsily stumbles directly into the arms of her billionaire, Asher...you get the feeling it's all been done before and that it's been done much better.

The character development is almost non existent. We have no idea why Asher is the way he is...We aren't sure why he and Jeremy are friends. Or even why Asher and Jessica fall in love?

The narration is extremely tedious. It's almost choppy and robotic. The voices are annoying.

In the end, the plan to devastate our hero and cause untold financial ruin, can be solved by Terminex???? It's absolutely and unequivocally preposterous and NOT in a good way.

It was difficult to like this story. Usually, I love train wreck stories but those stories usually have likable characters. There isn't much to like about these characters. They have no conscience over what they're doing. Especially the female lead. She flat out seduces a married man repeatedly and without remorse and the man allows it. Each convincing themselves they weren't "really" doing anything wrong. How do you like a character like that? Or even relate to them. I've read infidelity stories before but the characters had redeeming qualities. They grew as people within the story but these characters are flat and pretty boring. Not to mention the female is pretty immature as a whole.
The narrator is ok but definitely not great. She sounds nasally and tinny and almost robotic. It was really a difficult story to get into but since I can't ever NOT finish what I start...I suffered through it.
So many scenes that didn't need to be in the story worked as a filler and while I think the author was trying to use these scenes to give the dimensions of the characters it fell short. Just a bad story, altogether.

can't listen to this

the narrators voice is nazel and annoying. The story is ridiculous. even for fantasy the story is not much of a story. the opening scene is more of a rap than anything else. I got through 20 min and I was done.

the story was ok, i would of ended it differently. the sex scenes were hot hot hot! but the narration was HORRIBLE! it was like she was talking in a empty big room. also, how she talked was like every few words she was moving a marble or a piece of candy around in her mouth. and paused awkwardly