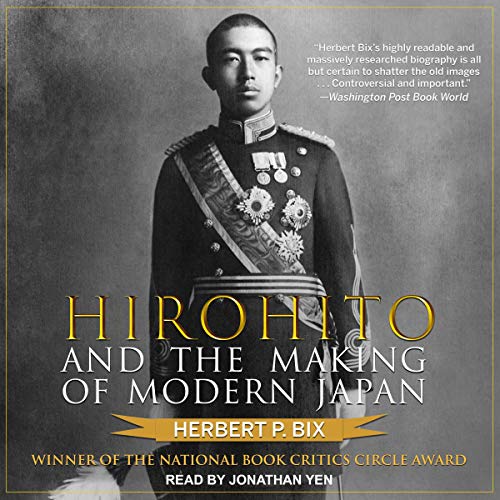 Hirohito and the Making of Modern Japan

In this groundbreaking biography of the Japanese emperor Hirohito, Herbert P. Bix offers the first complete, unvarnished look at the enigmatic leader whose 63-year reign ushered Japan into the modern world. Never before has the full life of this controversial figure been revealed with such clarity and vividness. Bix describes what it was like to be trained from birth for a lone position at the apex of the nation's political hierarchy and as a revered symbol of divine status.

Influenced by an unusual combination of the Japanese imperial tradition and a modern scientific worldview, the young emperor gradually evolves into his preeminent role, aligning himself with the growing ultranationalist movement, perpetuating a cult of religious emperor worship, resisting attempts to curb his power, and all the while burnishing his image as a reluctant, passive monarch. Here we see Hirohito as he truly was: a man of strong will and real authority.

Supported by a vast array of previously untapped primary documents, Hirohito and the Making of Modern Japan is perhaps most illuminating in lifting the veil on the mythology surrounding the emperor's impact on the world stage. Focusing closely on Hirohito's interactions with his advisers and successive Japanese governments, Bix sheds new light on the causes of the China War in 1937 and the start of the Asia-Pacific War in 1941. And while conventional wisdom has had it that the nation's increasing foreign aggression was driven and maintained not by the emperor but by an elite group of Japanese militarists, the reality, as witnessed here, is quite different.

Bix documents in detail the strong, decisive role Hirohito played in wartime operations, from the takeover of Manchuria in 1931 through the attack on Pearl Harbor and ultimately the fateful decision in 1945 to accede to an unconditional surrender. In fact, the emperor stubbornly prolonged the war effort and then used the horrifying bombings of Hiroshima and Nagasaki, together with the Soviet entrance into the war, as his exit strategy from a no-win situation. From the moment of capitulation, we learn how American and Japanese leaders moved to justify the retention of Hirohito as emperor by whitewashing his wartime role and reshaping the historical consciousness of the Japanese people.

The key to this strategy was Hirohito's alliance with General MacArthur, who helped him maintain his stature and shed his militaristic image, while MacArthur used the emperor as a figurehead to assist him in converting Japan into a peaceful nation. Their partnership ensured that the emperor's image would loom large over the postwar years and later decades, as Japan began to make its way in the modern age and struggled - as it still does - to come to terms with its past.

Until the very end of a career that embodied the conflicting aims of Japan's development as a nation, Hirohito remained preoccupied with politics and with his place in history. Hirohito and the Making of Modern Japan provides the definitive account of his rich life and legacy. Meticulously researched and utterly engaging, this book is proof that the history of 20th-century Japan cannot be understood apart from the life of its most remarkable and enduring leader.

"A historical bombshell.... Compelling.... The most controversial book yet on Japan's previous emperor." (The Economist)

What listeners say about Hirohito and the Making of Modern Japan

Not what I bargained for

The opinions of the author expressed in the first chapter are literally and without exaggeration insane. They include suggesting the US presence in Saudi Arabia provided a justification for 9/11, that the North Korean regime has been wronged by international sanctions and that even the Obama administration violated international law with aggressive foreign intervention (presumably in Libya). I was looking for a scholarly review of the life of emperor Hirohito, I got a 30 minute diatribe apologizing for the worlds worst dictators at the expense of not just the US but also Europe and pacifist Japan.

The most biased “history” book I have ever read. Not even a hint of balance. Horrible.

The Author has a very negative and condescending opinion about Hirohito. He makes that very clear in the first five minutes of the book.

It seems he used to be a respected professor at a university. I feel sorry for his students who had to endure listening to his dribble to get course credit.

On a secondary note, use a reader that is familiar with the pronunciation of the names and terms in the book. Judging by the readers name he is asian, but professor, an Asian is not an Asian.

Save your time and money, pass on his vitriolic diatribe.

How do I delete this rubbish from my library?

OK we get it, Bix hates America

I wanted a biography of Hirohito, not a criticism of US presidents Bush, Clinton and Obama for their policies in China and Korea. It's not even vaguely relevant as a preamble. Now listen, does the US have reckoning coming to it in relation to Japan during and after WW2? Sure. BUT WHEN DOES THIS GUY GET TO JAPANESE HISTORY, specifically Hirohito's reign? No clue and I was not going to stick it out. I regret ordering this one and will request my money back.

Not a serious work of scholarship

If you're looking for a solid, well-researched biography of Hirohito and his postwar role, look elsewhere. This is a shouty, polemical, completely predictable hard-left screed. I'm all for books with persuasive sociopolitical commentary, even (especially) if I don't agree with the author's perspective. This, however, was like sitting next to your washed-up old hippie cousin at Thanksgiving going on and on about how American militarism is responsible for everything from the death of the novel to the weeds in your lawn. I'd have tossed in an extra star had it at least tried to be interesting. Grandiose, third-tier graduate school fodder at best.

Nothing of interest in the first 2 chapters. The subject matter was too spread out and was not relevant to Japanese history.

not worth the cost an time to purchase, biased no history needs revisions badly, littering biases of past political lackies whose only interest was making money for personal interest hurting american people has little to nothing regarding cover of book

This is a book about World War II from Japan's perspective. This is an interesting story, but leaves the book with a misleading title.

The book is too long, given all the things that it doesn't cover. The book covers about a century of Japan's history (from the late 1800s to the late 1900s), but it gives almost no background on what else was going on in Japan during this era, or what influenced that era. Without being an expert on Japan's history, I felt like I was left with a lot of contextual gaps.

My point of comparison is Ron Chernow's "The House of Morgan." This too is a very long book that focuses on a similar length of time with an emphasis on a specific family. Chernow gives all the appropriate context, so that the book is more a history of the US during that era. It also is exceedingly readable, where Bix's text felt like more of a slog.

Ironically, I'm left feeling as though the US's decision to drop atomic bombs on Japan at the end of WWII was justified, which is a big surprise to me. World War II was preceded by adamant nationalism and imperialism across the globe. Japan was going to continue fighting WWII to the death, even though they effectively lost in 1944. The bombs helped to humble all parties involved. This is in no way a justification for nuclear war—nuclear war should never be an option. Instead, I'd like to call attention to the fact that global war places leaders in a position of needing to make impossible decisions.

The book opens with a bizarre tirade against the US military. Anger at the US military is justified; it's just confusing why the editors left it in a book that's supposedly a biography of a Japanese emperor.

author spends too much time putting his own political bias into his work and little on just facts to allow readers to make their own minds up. dreadful book.

The book is written with a tremendous amount of details, a manifestation of the research done on the supporting materials. The language is precise and the reading performance is clear and well paced.

A good book spoilt by an awful narrator

I managed to get through 8 hours before I decided I couldn’t put up with the narration any longer. A gruff, monotone, thick American accent strangling every word without a hint of inflection finally wore me down. It’s a pity, I’m sure he’s a lovely bloke but what made Audible give him a job narrating books is beyond me.

I bought the book and will read that instead.