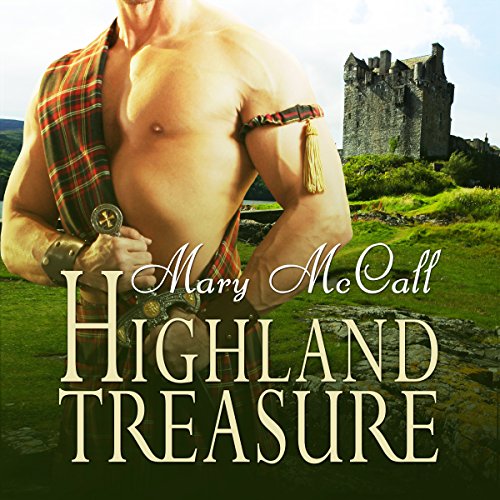 Can the Highlands survive a gifted soul with a tendency toward mischief?

Leonce MacPherson became chieftain after a Norman slaughtered his father and clansmen. For two years he raided Northumbria seeking vengeance while a dream woman promised the return of his great sword, stolen in the massacre. After escaping an abusive father Lady Hope Nevilles, unknowingly the Gifted MacKay of her generation, lived with animals for friends in wild Northumbria. She longs to flee to her mother's native Highlands and find a place away from capture and torture. Her father steals Leonce's son. Hope takes that as a sign to journey to the Highlands. She returns the boy and the great sword to Leonce, who recognizes her as his dream siren.

Can he trick her into marriage? She vowed to kill herself rather than submit to any man. Can she learn to trust? Will her father's sin haunt her future? Will distrust and jealousy doom their fragile union?

What listeners say about Highland Treasure

I Bloody Well Enjoyed It

If you are looking for a Highland story that is filled with fierce Highland warriors and damsels in distress then pass on this one because this book goes in a totally different direction.

At first I thought "Dear God, what did I get into" because I was not expecting a story that was silly, funny, and, at times, a little off the wall. As story progresses, you see our heroine, Hope, who is mischievous beyond belief and our hero, Leonce, who has to have the patience of a Saint to handle Hope's antics and her past that was filled with murder, deceit, and abuse. This is the kind of story that is cute, funny, and endearing.....yet sad at the same time.

This definitely was an unexpected change of pace for me and I bloody well enjoyed the silly fun. 4.5 Stars. Narration was great too.

I loved it! Funny and kept me laughing and crying at the same time. Great story and the history was appreciated.

I try not to have preconceived notions about any book I do my best to enter with an open mind. It was a lot of fun. Had those moments when I was laughing out loud.
Narrator was really good. Love her voices.

Favorite book of all time

I dont write reviews about anything..... ever. But I have to say this book has everything I could hope to have. I have listened to this story 3 times so far and plan on doing so again. I have purchased about 320 books from audible and this is my favorite by far. Hope is such a wonderful and unexpected character that I cant help but want to hear her story again and again. To anyone that reads this review take a chance and listen to Hope's story. I know you will not be disappointed.

Well worth a credit

Ms McCall takes us on a merry ride with empowered women that don't back down. I wonder if that really happened. Doesn't matter enjoyed the story. Ms Parker not my favorite narrator but she an acceptable job.

What did you love best about Highland Treasure?

All the characters are great. The plot has lots of hills and valley's. Listened to it three times already, and probably will again.

The Lady is so full of innocence toward life, she made me cry and laugh many times through the story.

Have you listened to any of Becky Parker’s other performances before? How does this one compare?

First time listening to this author, but would love to hear more of her stories.

Not sure, but would love to see this as a movie.

This is the first time I have left comments on a book, and I have read and listened to many books.

love it. loved the characters and the story line. truly a captivating story. couldn't stop listening to the book. the narrator voice was perfect for the story . her voice is easy to listen to.

I didn't see another story from her. wish there was a"next" story. You won't be sorry.

I love this book so much! This book will make you cry, laugh, cheer and stay up all night to finish it, so you can read it again!

Would you consider the audio edition of Highland Treasure to be better than the print version?
the performance added character and atmosphere to the story?
Yes the characters came alive with the performance from Becky

What other book might you compare Highland Treasure to, and why?
similar to the Outlander book series by Diana Gabaldon. has similar themes and set in a similar surroundings.

Would you listen to another book narrated by Becky Parker?
in short. Yes, I would.

Was there a moment in the book that particularly moved you?
i loved the book, but my favourite part was the beginning of chapter 18 where hope confronted her grandfather it was very humours and emotional

Any additional comments?
this is one of my favourite books at the moment