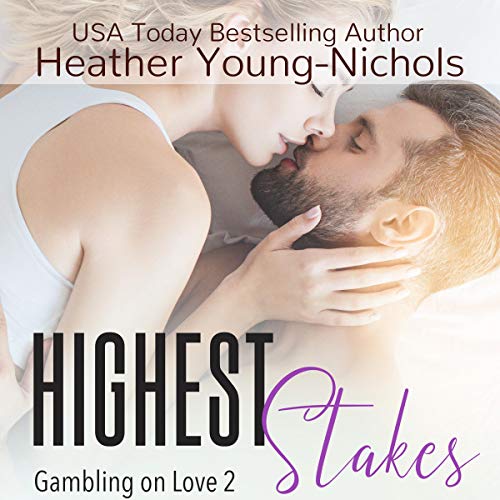 Kendra doesn't believe in love. Sex sure. But never love.

Then Kendra Roberts discovers she's accidentally been in a relationship for two years when her friend with benefits acknowledges how he feels about her. Time to cut him loose.

For a while, it's easy for her to believe she made the right choice. Hiding from the truth is as second nature to her as breathing. Until she goes on a girl's weekend and realizes just how lucky she'd been to have Adam in her life.

Panic goes nuclear when Kendra finds out that Adam is trying to move on. But being in a friend's wedding together could be the second chance Kendra needs to prove she wants the same forever Adam does.

Love by the Slice

Love by the Mile

Love by the Rules

Dirt on the Diamond

After Office Hours: Seducing the Professor

What listeners say about Highest Stakes

This book made me so angry at times. Not at the story, but at the author. I expect less chauvinism from any modern author, and especially from a female one, especially in this era. The phrase "cry like a girl" repeated itself, coming from the main female character. The second time it did I wanted to turn off the audiobook and not complete it. The only reason I kept going was that the story itself wasn't bad and I wanted to write an honest review after completing the whole book. The narrator sounded mechanic, monotonous, and felt like she didn't understand what she was reading. In addition, there was an eco to the recording, which ended up as a less than exciting listen. I received a free review copy of this book and am voluntarily leaving a review.

What a great romance read / listen. I really loved this story line. This is Kendra and Adam's story of love discovered. The narration on this read was a bit distracting for me, it was really choppy in places like there were unnecessary pauses in sentences that shouldn't have them, otherwise really well done. I couldn't have done with out all the lead up to Kendra's past - I don't really get why she felt she needed to keep everything so secret from her best friends but I love that her friends were there for her and I love the dynamic between all these characters - They all seem very relatable and very next door-ish. Friends who are there and support each other even when there is conflict in a group is more the reality than not and I loved how Young-Nichols portrayed this. Great read / listen. I hope to have the opportunity to read more about this band of besties! This book was given to me for free at my request and I provided this voluntary review.

Boy Kendra can really be difficult. I love that this group of friends call each other out and don’t let the other ones get away with anything.

This was a great listen. I loved the characters of Adam and Kendra. Actually I loved all the characters. The story was just the right amount of sweet, hotness and romance. The pace of the story and narration was good and complemented each other very well. Amazing job!

I had previously read all three books in this series and really enjoyed it... each story pulls on the heartstrings as the character face difficult issues. In this book you've got Kendra who doesn't believe in love and has had a friends with benefits relationship with Adam. When she realizes he wants more and she can't give it, she cuts him loose. What she doesn't count on is how she would feel when he tries to move on. Lots of emotions to this one. While I really enjoyed reading this story, the narrator for the audiobook didn't resonate with me - the flow wasn't there for me at times, like she wasn't paying attention to commas, periods, etc when reading. Listened to the end but had I not known the story already I might not have continued with it. For me, the narrator is key with audiobooks - a good narrator (or bad) can make or break a story. Just my two cents. Overall enjoyed the story. Perhaps I've just listened to too many books narrated by Andi Arndt, someone who is at the top of her game.

The narrator was very stilted at the beginning with a noticeable echo.  It got a little better as the book went on, or I got used to it, but she still sounded stiff.  She enunciated well, so there is that. The story was fun when it wasn't heartbreaking. I didn't read the first book in the series but it is constantly referenced (and properly explained so you don't have to have read it) with the main characters of book 1 tying the knot and tightly woven into Kendra and Adam's story.

I fell in love with Adam. Even when Kendra realized what she had, he didn't make it easy for her. It's normally the other way around and I loved it. The story captivated me and I was hooked wanting to know why Kendra didn't want a relationship. The narrator did a great job bring the story to life.

This book can definitely be read as a stand-alone since I haven’t read the first and still loved this one. These two are so in love and yet Kendra is not able to admit it. The angst that they both go through is a bit of a rollercoaster that we can’t help but hop on and ride with them to see how they can get their happy ending. I really enjoyed this book and all the characters in it. I will definitely be looking into the rest of this series.

Highest Stakes (Gambling on Love, Book 2) is a new adult college romance with supporting character's crossing over from previous audio. I actually read these out of order as I read book three first, then book one and then book two so I knew what to expect. I was thrilled to get the chance to listen these in audio's. This one being my least favourite in the series but still so good. I adored Adam from book one. Kendra not so much but that maybe because I so adored Flanigan so much no other female could compete with her. Suffused with sassy banter and angsty moments a fun entertaining listen. Narrator Sara Chambers inflection was smooth and dramatic. Her performance brought the characters and their lovestory to reality. A cheerful listen with engaging characters.