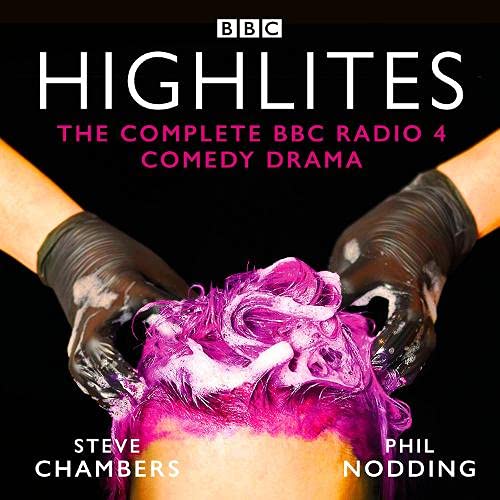 All six series of the BBC radio comedy centred around a village hairdressing salon - plus pilot episode.

Based in the little town of Bridgeford, High-Lites salon boasts the most misanthropic hairdresser in Britain: sharp-tongued, mean-minded Bev. With the help of her soft-hearted (though slightly dim) assistant, Shirley, she tends to the tresses of a motley crew of local characters. As she cuts their hair, she finds out everything that's going on in their lives - and wastes no time in spreading some gossip of her own....

In the pilot episode, one of her little lies takes on a life of its own - and a dodgy dryer nearly spells disaster. Series one finds the salon on the brink of bankruptcy, forcing Bev to take desperate measures to keep it afloat. In HighLites: Retouched, the two stylists go mobile when their premises are shut down by Environmental Health, and in HighLites: Split Ends, Bev tries to undercut her rival, Anton, to secure a lucrative wedding hair gig.

HighLites: Wash and Blow finds the hairdressing duo heading out on a cruise, hoping to drum up a little business below deck. But it's not all plain sailing.... In HighLites: Dye Another Day, Bev and Shirl are faced with a huge tax bill, and connive to inherit from a wealthy old man's will. And in HighLites: Natural Bounce, the world's worst hairdressers discover that there's money to be made in fitness, and decide to open a gym above the salon - but is this an expansion too far?

With Adie Allen and Scarlett Brookes

What listeners say about HighLites: Series 1-6

Really easy listening with a good cast I wouldn’t say it’s “hilarious” but they are very easy to listen to. Each series is one episode split into 15 minutes.