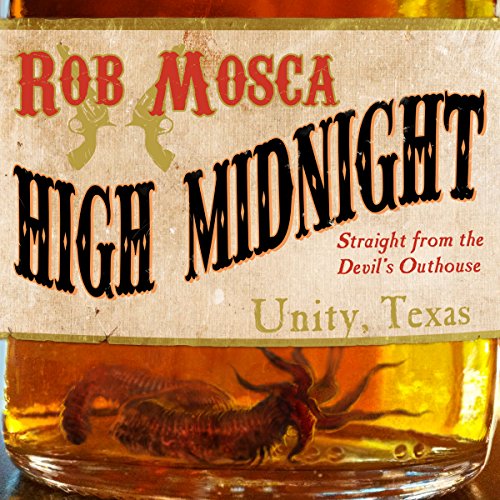 High Midnight is a modern day supernatural Western set against a preternatural backdrop. It is a surreal trip into a world of fanciful cryptid-creatures - a menagerie of monstrosities that literally crawl from a crater perched at the mouth of Hell. The 'Devil's Outhouse' emits both a stink and an allure for vagrants, vagabonds and those wishing to be lost or forgotten - or simply left alone. It is the perfect place to build a nowhere town.

Welcome to Unity, Texas. Population: Bizarre. The only thing protecting the residents of Unity from a stream of nightmares is Laredo Beaumont, the town's hard-drinking, ass-kicking sheriff, and Cicero, his knife-wielding chimpanzee deputy. It's a thankless job that leaves Laredo drained and nearly broken. The only solace he can find is in the arms of his beloved Sally Mae, a ghostly soiled dove from a phantom bordello where only the most daring of men would think to step foot.

But midnight is fast approaching Unity, leaving Laredo to face not only creatures from Hell and the walking dead, but a band of homicidal clowns who have their own score to settle. A gonzo pulp Western for the 21st Century, High Midnight is a timeless tale of blood and redemption.

What listeners say about High Midnight

What do psychotic clowns, cryptid chimeras, drunk sheriffs, Russian novel reading monkeys, ghostly lovers, and zombies have in common? Not much beyond this book. Set in modern day, Unity, Texas is a place to the unwanted, drunk, and those not wanting to be found to disappear. Laredo Beaumont, the sheriff, takes his job seriously, especially the napping and drinking part. At least, until the day a murder of clowns shows up.

This is one of the oddest books I have ever read. I knew it was a mishmash of genres and plot devices going into it, but the various elements pulled in was beyond expectations. And the author made it all work beautifully. I was constantly entertained, usually surprised, and left wanting more. I hear rumors there is a second book in the making and I have my fingers crossed that is true.

The book starts off with psychotic clowns. Admittedly, it does jump around quickly from clown to clown, and often with swift punches of flashbacks showing a little bit of why that clown is now with a sadistic gaggle of clowns on a near deserted highway. Don’t be put off by this because the point of view settles down after that and gives a good story, with a few flashbacks here and there. The viewpoints do change throughout the tale, but we get to spend enough time with each character that the reader has time to connect with them.

I found Unity to be a fascinating town, especially all the problems they have with the cryptids such as the chupacabra and jackalope chimeras. The biologist in me wanted to do a summer study course in Unity. The half with the common sense knew we would have to get lost in a desert teeming with the shuffling undead. The zombies don’t feature heavily in this book, but do have a little key part to play.

Laredo and Sally Mae were my two favorite characters, one being a drunk authority figure and the other a ghostly bordello lass. They both kick ass in their own ways. And there is one sex scene. It is smoking hot, literally. There are flames involved. And a luchadero mask. Haha! Hooray for Mexican wrestling! That little detail gave me a good laugh, and yet, it really worked with the character.

Yes, there is a deputy sheriff. His name is Cicero, a chimpanzee. He wields knives and reads dreary Russian literature. Periodically, he smashes up the one and only bar, which is owned by the mayor of the town. She doesn’t appreciate such antics; hence, he has a job and has to keep it to work off his binges. Toss in the clowns (like Kiss me Kate) and some other town characters (the mayor’s bathrobe attired husband) and you have a very eclectic cast.

The plot was pretty straight forward. The clowns have been gallivanting about the country side looking for a specific person, someone they feel they need to payback (like by breaking said person’s kneecaps). In Unity, the sheriff struggles with the big question: why am I here? While he wrestles with that, all these other characters are just going about their lives, until some clowns with questionable makeup skills arrive in town. Really, the plot gave this backbone for all these character to play together on. I am fine with that because it was damn entertaining!

Narration: Bernard Setaro Clark was a good fit for this book. He had a variety of voices (and you definitely needed that for this book). His female voices were totally believable. Luckily, we weren’t treated to any monkey screeches. He had no hesitancy with the evil clowns or the love scene.

High Midnight IS as awesome as it looks!

What did you love best about High Midnight?

Aside from the action packed plot and the amazing mash-up of genres (zombie-western-horror) Mosca is descriptive to the point of immersion and Bernard Setaro Clark really gives this story the voice it deserves.

What does Bernard Setaro Clark bring to the story that you wouldn’t experience if you just read the book?

Bernard's fluent narration brings the story to life! He makes this a rip-roarin' good listen!

Do yourself a favor, purchase this audiobook!

this was a thoroughly enjoyable performance. I recommend it to everyone without hesitation. I had to print more and got a lot out of it the first time I read it, but there is so much I missed and then I got with his vocal performance that I'm very glad that I went ahead and got the Whispersync. The fact of the matter is this is one of the best emulation of the genre that I've ever seen. I've actually sent two copies of this book to libraries and hope to getting them to read it.
I guess given the amount of time has passed we may not get a sequel now or ever potentially but I enjoy it for what it is and highly recommend it if there does end up being and I'll follow up I can't wait to read it or in this case listen to it

The characters were all unique, interesting, weird, and well-developed.

Bernard Clark was a wonderful narrator. All of the voices were perfectly crafted and distinct without being over-the-top.