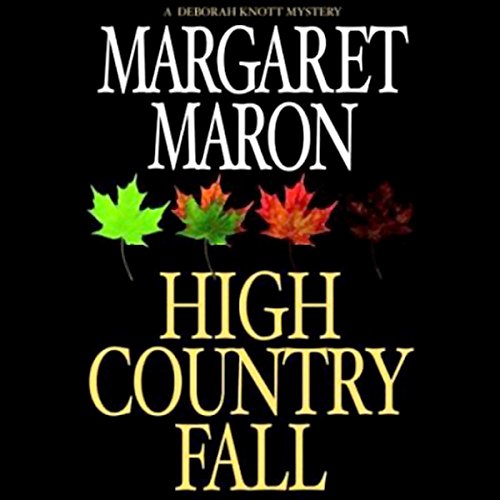 Publishers Weekly declares that the "leaves of autumn are in full splendor, and so is Maron's talent in her 10th Deborah Knott adventure". Judge Knott is finally ready to marry her long-time friend Deputy Sheriff Dwight Bryant and settle down...or is she? She jumps at a chance to fill in for a judge in the high country of North Carolina. But ugly murder haunts the beauty of the Smoky Mountains.
Don't miss the other books in the Deborah Knott mystery series.
©2004 Margaret Maron (P)2005 Recorded Books LLC

"The mountain setting plays a huge role here, and Maron does a beautiful job with it, adding local color, as well as delightful regionalisms, to give her characters plenty of personality" (Booklist)

I've listened to all the Deborah Knott books and love them and C J Critt. This book makes you want to visit North Carolina!

I highly recommend this author and book as not only an intriguing story line but highly reflective of life in the Carolinas. Maron captures the essence of the life and mannerisms of the south in a humorous but loving way. I love her main character as both a member of a large extended family as am I and also reflective of the conflict of modern woman between personal and professional life.

What other book might you compare High Country Fall to and why?

The reader is rushed in pace and with a nasal quality that is irritating. I found her tone to be aggravating and not at all what I had imagined to be the main character's voice. Very unhappy with her work. If future audible books for Maron use her, I won't be buying them.

Parts of it made me laugh because the characters were realistic and folks that have peopled my own life.

I look forward to seeing who is used as reader in the future books.

I would and have unconditionally recomend this book to a friend. I like Maron's writing and am hooked on her characters, her stories, and her depiction of southern life. My only caveat is the narrator. Her voice is not overtly southern, which I would prefer for these books, and I don't like the way she does southern accents in men. That said, I've listened to a number in this series and I am used to her, so it doesn't seem so glaring anymore, and I do like her level of inflection and emotion. But, really, it's the book itself that is so good.

Maron's characters ring true to me as a southern woman of a certain age. Even though I grew up in the city, much of what her character went thru as a southern woman I can relate to. I also like the way she brings modern issues into the stories and shows their impacts on the characters -- and by extension all of us -- and the way of life. The mystery is not one that I immediately solved (but all the "clues" are revealed to the reader -- so I had a fighting chance of solving it), but it also doesn't leave the reader saying "huh?" at the end either. In this book, I thought the romantic angst felt by Deborah, the main character, was a little unbelievable, but in this series of books it's rare that I come across anything unbelievable. And nonetheless the personal story still appealed. I like the way the characters have grown over the course of the series.

As usual the story was not only entertaining but had its funny side. I really enjoyed this one and I'm glad the judge realize love is real

I discovered this series thanks to a Daily Special. I'm so glad I bought that first book. I'm working my way through the books available on Audible and haven't been disappointed in any of them.

I like Deborah Knott, the main character. She is a District Court judge who deals primarily with lesser crimes. Sometimes she has to travel to fill in for other judges. Her travels to different places are one of my favoroite things about the series. Margaret Maron's writing makes these places very real in my mind, even though I've never visited the area where the books take place.

Margaret Maron is an excellent story teller. Her mysteries are intricate and her characters interesting and well developed. I look forward to reading all the books in this series.

Love finding out what Deborah really thinks about Dwight! Mystery part is good but not great. Contains a few production hiccups -- skipping, short gap or no gap between chapters, longer pauses as pages turn.

Could not get into this.

What disappointed you about High Country Fall?

The narrator was awful and the story dragged. Won't continue reading the series.

Has High Country Fall turned you off from other books in this genre?

She was not believable.

Not up to her best work

I was disappointed in the inner deliberation Knott has about her fiance, and disappointed in the handling. Maron has shown that she can write well, and the way Knott thinks, and the way it is all presented as she careens through her dilemma felt juvenile. Knott is a mature woman who can be dumb sometimes, that is true, but her thinking is not juvenile. Drove me crazy.

The story was fine; Again, not her best work but it was okay for a drive.

Where'd they find this narrator?

Her voice is grating, really annoying. The phrasing is choppy, filled with confusing pauses. Very often it sounds as if she's reading this for the first time. This was my first audio recording of the Deborah Knott series, and if she's going to continue to narrate them, I'm going back to the books.