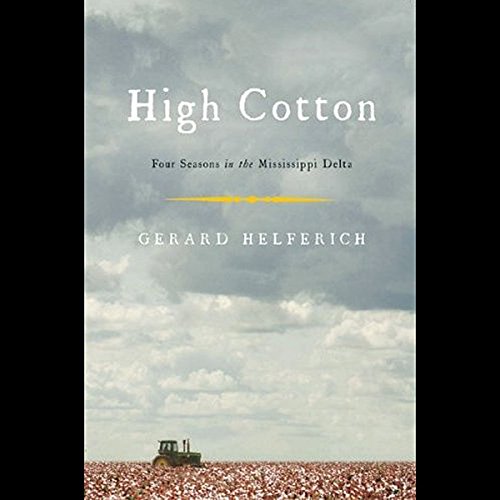 What farm crop sparked a civil war, spurred on inventors during the Industrial Revolution, kept millions enslaved for generations, prompted the mass migration of millions more decades later, and now serves as a lightening rod in the debate over farm subsidies and globalization? The answer is a simple, white, fluffy product called cotton, according to Gerard Helferich’s engrossing book High Cotton.

But to fully appreciate Helferich’s carefully researched, detail-filled book chronicling a year in the life of one Mississippi cotton farmer, you need to listen to Jeremy Gage’s performance. Gage’s reading of the book perfectly fits the subject matter; Like many other new style journalists, from Tom Wolfe to John McPhee, Helferich wisely decided to write about a wide range of sweeping historical and political issues by zeroing in on one single farmer. Gage has a laconic, lilting voice which breathes just the right amount of down-home charm into this very personal story about some of America’s most important social, political, and economic issues. And thanks to Gage, the story doesn’t feel like a stuffy college lecture. You feel like you’re sitting on a friend’s front porch on a lazy Sunday afternoon, listening to someone’s uncle tell a story about a farmer he once knew back in the Delta.

Helferich chose to write about his wife’s cousin, longtime cotton farmer Zack Killebrew, who owns a 1,000-acre farm in the small town of Tchula, Mississippi. Helferich also just happened to pick a very eventful year in the life of Killebrew to write about. Hurricane Katrina struck that year, leaving the fate of Killebrew’s cotton crop in doubt as the storm barrels down on the Gulf coast. Killebrew must also deal with the absence of his wife, who moves out midway through the book.

What will happen to Killebrew’s crop? Will he be able to make any money or even just break even? Or will he be forced to close his farm like so many others have sadly done in recent years? These questions propel the story forward and give High Cotton a sense of urgency. Cotton farming might seem simple, but after listening to this account, you’ll never think that way again about this mighty American crop and farmers like Killebrew. —Ken Ross

This dirt-under-the-fingernails portrait of a small-time farmer follows Zack Killebrew over a single year as he struggles to defend his cotton against weeds, insects, and drought, as well as 21st-century threats, such as globalization. Over the course of the season, Helferich details how this singular crop has stamped American history and culture like no other. Then, as Killebrew prepares to harvest his cotton, two hurricanes named Katrina and Rita devastate the Gulf Coast and head toward the Mississippi Delta.
©2008 Gerard Helferich (P)2009 Audible, Inc.
Biographies & Memoirs State & Local Agricultural & Food Sciences
Show More Show Less

"Zach has been involved in it for 30 years, and not only his dedication but also his gut wisdom about the cycles of nature are to be marveled at. The history of cotton cultivation, the tractor as a farm implement, and sharecropping are all topics explored for the grateful reader." (Booklist)

What listeners say about High Cotton