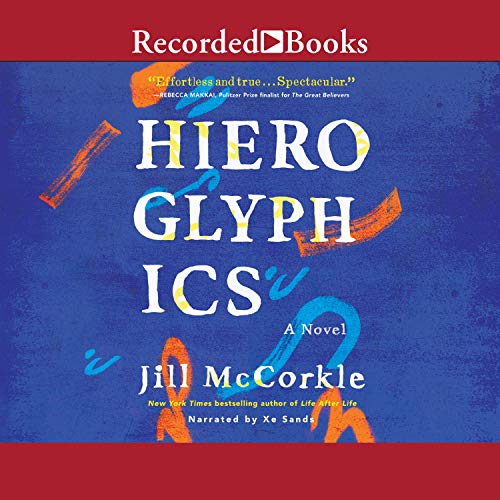 Lil and Frank married young, launched into courtship when they bonded over how they both - suddenly, tragically - lost a parent when they were children. Over time, their marriage grew and strengthened, with each still wishing for so much more understanding of the parents they’d lost prematurely.

Now, after many years in Boston, they have retired in North Carolina. There, Lil, determined to leave a history for their children, sifts through letters and notes and diary entries - perhaps revealing more secrets than Frank wants their children to know. Meanwhile, Frank has become obsessed with what might have been left behind at the house he lived in as a boy on the outskirts of town, where a young single mother, Shelley, is just trying to raise her son with some sense of normalcy. Frank’s repeated visits to Shelley’s house begin to trigger memories of her own family, memories that she’d rather forget. Because, after all, not all parents are ones you wish to remember.

Hieroglyphics reveals the difficulty of ever really knowing the intentions and dreams and secrets of the people who raised you. In her deeply layered and masterful novel, Jill McCorkle deconstructs and reconstructs what it means to be a father or a mother, and what it means to be a child piecing together the world all around us, a child learning to make sense of the hieroglyphics of history and memory.

What listeners say about Hieroglyphics

I usually enjoy Jill McCorkle but this is one of the darkest, bleakest books I've ever encountered.

A Novel Written in Memoir Style - Loved it!

As an older woman, I seek out books that tell how a person, particularly a woman, has reflected on her life. This book tells the story of an older couple, husband and wife, reflecting on both of their lives and the intimate details and remarkable events that even ordinary folks experience. I found it immensely satisfying and touching. If a book makes me want to sit down and write my own story, I consider it a "success." It does jump around in time a lot, but the narrator is excellent and helpful in sorting out who is speaking when and where in time. I look forward to reading more by Jill McCorkle. Bravo!